Your guide to the practical uses of hagfish slime, glowworm glue, and other animal goo

The surprising benefits of animal-inspired gunk 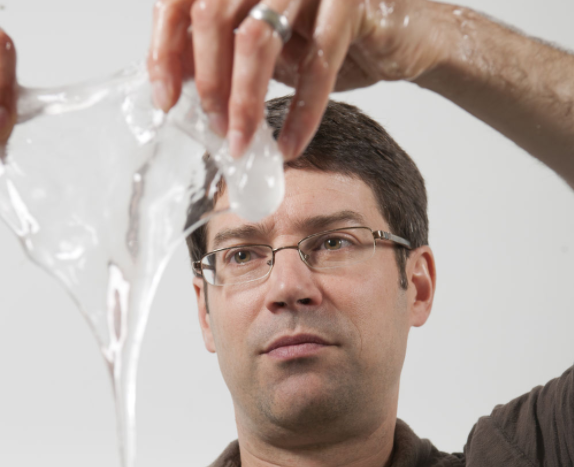 The waters around New York City used to be filled with hundreds of thousands of acres of oyster beds. Before humans gobbled them up and polluted their waters, these oysters cemented themselves to rocks and to each other.

“Supposedly back in colonial times, New York harbor was so thick with oysters you could practically walk across it,” says Jonathan Wilker, a chemist and materials engineer at Purdue University in West Lafayette, Indiana.

When dense clusters of oysters such as these can take hold, they serve the coastal environment by filtering water, holding dirt and sand in place, and absorbing the force of storm surge. All of this is possible because of the powerful cement oysters make to anchor their bodies in place.

That’s not the only way that humans can benefit from the gooey substances animals make. Wilker and other scientists around the world are studying how and why animals make glues and slimes, and trying to concoct their own versions. These goo mavens hope to put their bio-inspired materials to work as surgical glues, safer alternatives to some of the adhesives we use now, or temporary glues that come apart when they are no longer needed.

“There’s adhesives all around us, everywhere,” Wilker says. “A lot of it’s permanent, a lot of it’s not very good for us. So I think we have a lot of room for improvement.”

Oysters aren’t alone in using sticky pastes to stay put. Mussels, barnacles, and other sea creatures cleave to rocks and their fellows for a few reasons. Coming together in glue-bound communities protects these critters from being knocked about by waves, scooped up by hungry seabirds, or struggling to find a mate on their own.

“Basically their survival depends on it,” says Wilker, who studies oyster and mussel adhesives.

These marine animals could inspire surgical and dental glues that are nontoxic and hold tissue together in the moist confines of the human body. “Most of our adhesives don’t set in wet environments…so we have to look to nature for the answers here,” he says.

The tools that surgeons most often rely on are not ideal. Sutures and staples poke holes in healthy tissue. “You’re building up all these sites of mechanical stress, you’re creating sites for infection,” Wilker says. As for screws, “it’s unbelievable how much healthy bone you have to drill out just to hold a plate in place if you want to connect pieces of bone. I think…patient outcomes would be a lot better if we could transition from sutures and staples and screws to adhesives.”

Mussel glue might be ideal for soft tissues, while oysters’ stronger cement could be used on bones. Wilker and his colleagues are working on bio-inspired glues for other situations as well, tweaking them to perform well under different conditions.

Many of the products we use in our daily lives are held together with permanent glues. “If you think about…computers or furniture or car interiors or phone books or shoes…at the end of their useful life for the most part we just pitch them into landfills,” Wilker says. “How are you going to get all the precious components of your computer or your laptop apart?” His team is working on bio-inspired glues that degrade when they are no longer needed, making recycling easier.

They’re also working on anti-fouling to thwart animals with sticky designs on the hulls of ships. Barnacles and other freeloaders increase a ship’s drag and fuel burn, and are currently deterred by red-hued paints that leak copper ions into the water. “So in essence our current anti-fouling technology is to kill everything in the water around the ship,” Wilker says. “If you can first understand how the animals stick, you can then use that information to develop coatings that animals cannot stick to, without having to leach toxins into the water.”

He and his team have been testing coatings that prevent mussel glue from adhering to a surface. But it’s no easy feat to stymie all the animals that are determined to lay down glue. “Nature finds a way—they’ll find a way to stick,” Wilker says.

Goop can make a powerful deterrent. Hagfish are known for tying themselves in knots to get a better handle on the carcasses they devour from the seafloor. They have another unusual talent: shooting slime at their enemies.

“Hagfish slime isn’t about necessarily sticking to things,” says Douglas Fudge, a marine biologist at Chapman University in Orange, California. “The slime appears to be very good at clogging things like gills.”

Hagfish secrete their mucus from lines of slime glands that run the length of their body. “There’s really no place where you can bite a hagfish without having slime come shooting out at you,” Fudge says.

The slime has a few unique qualities. Hagfish can pump out vast quantities of the stuff in a fraction of a second. “How they make so much of it, we don’t fully understand,” Fudge says.

The slime is also filled with silken fibers. “That’s what makes it very unusual—it’s not just mucus and water, it’s mucus, water, and these tens of thousands of silk-like threads,” Fudge says.

He and his colleagues study this unique secretion by anesthetizing hagfish and then coaxing the slime glands to divulge their contents. Manmade versions of hagfish slime might serve a few different purposes. Fudge cannot share details of the projects he’s currently collaborating with several companies on. But he says that one application that people have considered is using hagfish slime threads as an alternative to spider silk for bio-inspired materials. “Hagfish slime threads…have material properties that rival spider silks,” he says. Currently, researchers are trying to copy spider silk in hopes of making materials with the strength of steel and flexibility of rubber.

Fudge has also spoken about how the fibers might be useful in safety helmets or bulletproof vests. And in January, Navy researchers announced that they had created a material inspired by hagfish slime. “The synthetic hagfish slime may be used for ballistics protection, firefighting, anti-fouling, diver protection, or anti-shark spray,” biochemist Josh Kogot said in a statement. “The possibilities are endless.”

Other animals do use glues to protect themselves. Some sea cucumbers eject sticky threads to tangle up predators, while certain salamanders secrete glue to quickly gum up a predator’s mouth. Because they work under dry conditions, the salamanders’ concoctions might inspire skin glues. “Salamander glue is…very strong,” says Janek von Byern, a zoologist at the Ludwig Boltzmann Institute for Experimental and Clinical Traumatology in Austria. “When you compare it with commercial systems, it’s very good competition.”

Glue can also be used to snare a meal. A newly described species of worm snail shoots webs of mucus at its prey, while many spiders and glowworms wait for their dinner to blunder into the sticky threads they have made.

In December, von Byern and his colleagues reported that the droplets that make glowworm fishing lines sticky are made mostly of water and the worms’ own wastes. The goo is 99 percent water, laced with a bit of urea and other ingredients. This simplicity means that glowworm glue could be a good template for cheap manmade glues for furniture, paper, or cardboard, von Byern told Popular Science.

This could be a safer alternative to formaldehyde-based wood glues, which are extremely cheap. Formaldehyde is an irritant in low doses, and carcinogenic in high ones. These glues became infamous in the wake of Hurricane Katrina, when people became sick after taking shelter in trailers provided by the Federal Emergency Management Agency. “They were baking in the hot Louisiana sun and then the formaldehyde started coming out of the adhesives in the paneling,” Wilker says. More recently, retailer Lumber Liquidators found itself in hot water for selling flooring with high levels of formaldehyde. “If we could go to things that are more bio-based and less toxic…that would be great,” Wilker says.

The same may hold true for cosmetics. “For bonding the fake nails and the eyelash extensions, it’s basically superglue…and that’s not very healthy,” Wilker says.

Animal-inspired glues won’t replace all the adhesives we use. “We don’t want to get rid of all these glues, some of them are really strong synthetic glue,” von Byern says. “But the moment where human contact is given, I think we should think about, is it really necessary?”

Providing an animal-inspired alternative isn’t a quick or simple task. Scientists must figure out how an animal makes its gunk, what ingredients are involved, and how they can mimic it. Then, scientists must test its strength on materials such as wood, pigskin, or animal bones. And, finally, they must make their own version even better than the real thing.

It wouldn’t be practical to take glue directly from the animals. For one thing, harvesting sufficient quantities of goop would be a challenge. And once we know the formula an animal uses, we can tweak it to make it more human-friendly. “A mussel wants…to bond itself to a rock or an oyster wants to bond itself to another oyster,” Wilker says. “It’s not necessarily the same thing as what you might want for bonding bone to bone, or making a new version of plywood or soft tissue bonding, or a dental cement or a cosmetic glue.”

A world of goo

Each flavor of goop is adapted to the needs of the animal that makes it. Glowworm glue is only sticky under very humid conditions. Salamander glue must set in an instant, before its pursuer has a chance to chomp down. Mussel glue can take more time to harden. “It doesn’t need to be fast but…it has to be working for the rest of their life, always strong and never changing,” von Byern says.

Copying these gunks could give us a wide array of adhesives, perfectly suited for human needs. And they’re just drops in the ocean of animal glues and slimes. Starfish use adhesives to crawl along the seafloor and pry open shellfish. The aptly named edible-nest swiftlet coughs up long strands of sticky spit to build its nests, which are prized as a delicacy. Slugs ooze mucus that helps them slide along the ground—and has inspired designs for greenhouse windows that store and release moisture. The ancient nautilus lines its tentacles with glue instead of suckers, while fish secrete a mucus coat that protects them from pathogens and pests. And plenty of other creatures outside the animal kingdom make gunk of their own, from the “flypaper” found on carnivorous plants to dental plaque (it’s a biofilm made by the bacteria that dwell in your mouth).

We’ve got a lot to learn about the many varieties of goop that appear in the natural world, and how they can serve us. But more and more labs are turning their attention to animal goo. “It used to be pretty odd and niche,” Wilker says. But now, “we’re getting to the point where commercialization and actual impact is just around the corner.”