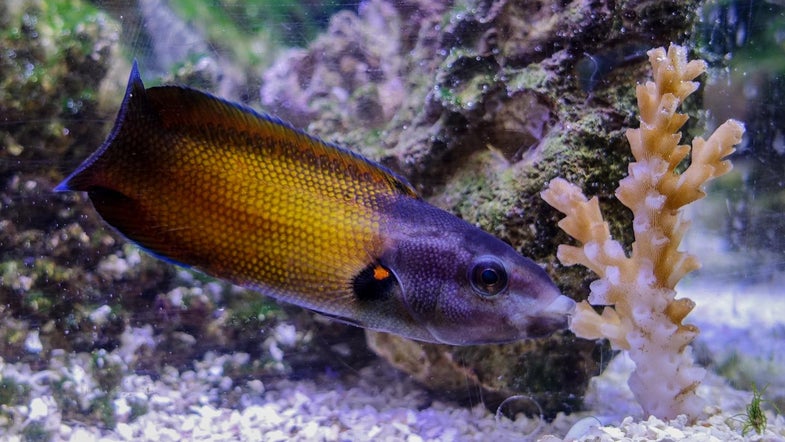 Corals are homebodies. They spend the vast majority of their lives within their tough, beautiful colonies on reefs, hanging out with their symbiotic algae. They can’t run from any threats, so they’ve developed some serious defense mechanisms. When something tries to take a bite of them, they send back a stinging retort; they’ve got venomous cells that cause the would-be predator serious pain, and their sharp skeleton adds injury to injury. The vast majority of fish living near coral reefs just avoid the situation and go after less aggressive prey.

But that doesn’t mean that all predators will lay down in this evolutionary arms race. Some, like the crown of thorns starfish, will literally invert their stomach out over the corals, digesting the tasty bits on the outside of their bodies. Parrot fish, on the other hand, have beaks that grind corals into dust to get at the algae. But there are a lot of other coral eating fish that manage to enjoy their difficult meals without incident, and they don’t have quite as obvious adaptations.

Take the tubelip wrasse: this little guy chows down on corals, but it doesn’t have a beak, and its stomach stays firmly inside its body thank-you-very-much. What it does have are its eponymous lips. And boy, are they something.

In a paper published this week in Current Biology, researchers zeroed in on the wrasse’s lips as the key to their coral-eating habit.

“One always assumes that fishes feed using their teeth, but, like us, the lips can be an essential tool,” study author David Bellwood said in a statement. “Imagine feeding without lips or cheeks; the same applies to fishes.”

Other wrasses—ones that don’t eat corals—have lips as well, but theirs don’t cover the teeth in the same way the tubelip wrasse’s lips do. Instead, the non-coral eating wrasse have teeth that tend to protrude out of their mouths.

Meanwhile, the tubelip wrasse uses its lips to ‘kiss’ its prey, creating a seal and then sucking out the tasty mucus secreted by the coral, and occasionally tissue. In the paper, the researchers report that this eating method produces a signature sound, something they refer to as “an audible ‘tuk’.”

The wrasse’s lips are ribbed with membranes perpetually coated in what the researchers assume is a protective mucus.

“The lips are like the gills of a mushroom but covered in slime,” Bellwood said in a statement “It is like having a running nose but having running lips instead.”

Not exactly true love’s first kiss. But the perpetually running lips serve a valuable purpose, with the mucus acting as a coating for the bits of coral on their way down into the wrasse’s digestive system. It helps a wrasse ingest dinner without its food biting back.

The next step for Bellwood and colleagues will be to look into the properties of that mucus and figure out how it manages to keep the fish safe.

It’s snotty work, but someone has to do it.