Humans are likely to blame 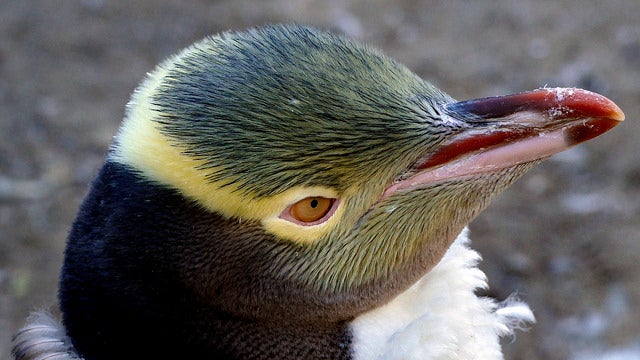 If things continue on their current trajectory, New Zealand’s yellow-eyed penguin may go locally extinct by 2043, according to a study released today in the journal PeerJ. Breeding penguins declined by 76 percent between 1996 and 2015. And while climate change is a factor, it’s unclear if it’s the most important one.

The penguins in question make their home in the Otago Peninsula, a little over twelve miles of undulating greenness on the east coast of New Zealand’s South Island. This self-proclaimed wildlife capital of the Kiwi nation is home to fur seals, sea lions, and the aforementioned yellow-eyed penguin. The penguins are benthic foragers (they find their sustenance at the sea floor) so they spend a lot of time scrounging for food in the impossibly blue waters of the South Pacific.

In the 1940s those waters, including the incredibly fun to pronounce Kumo Kumo Whero Bay, warmed enough that, based on current understanding of the penguin-ocean temperature relationship, the region’s yellow-eyed penguin populations should have declined. Thanks to the fastidious record keeping of one Lancelot Eric Richdale, a school teacher and amateur ornithologist, we know that wasn’t the case. Instead, their populations boomed.

“Richdale said that he was certain that it was because of the absence of lots of activities in New Zealand due to the war effort,” says Thomas Mattern, ecologist at the University of Otago and lead author of the new study. “Lots of people were over in Europe fighting the Second World War, and everything was dialed down a few notches. In terms of agriculture and fisheries it was down to the bare essentials. The penguins benefited from the reduced activities of humans.”

Richdale’s data suggest that the declining population of yellow-eyed penguins can’t be blamed exclusively on climate change—though to be clear, climate change hasn’t done them any favors. In the years when air temperatures rose above average, more young penguins died.

“But if it was just climate change by itself the penguins would probably do quite well, they would adapt,” says Mattern. “Climate change is not the end of a species alone. We just can’t say all of the species are disappearing because the climate is changing. We also have to look at all of the other pressures that we’re putting on these species, particularly regional pressures.”

Mattern’s team used population data recorded at Kumo Kumo Whero from 1937 to 1948, and from 1982 and 2015 at Boulder Beach, one of the yellow-eyed-penguin’s mainland strongholds where there’s better modern record keeping, to assess the impact of various factors on declining populations. Using this technique, he was able to attribute roughly a third of their decline to warming temperatures likely related to climate change. But what about the remaining two-thirds?

“When we study populations of wild animals, we’re doing all of these modeling studies with which we need additional data to see which factors influence these populations,” says Mattern. “Climate data is widely available, so we have all of this climate data that we can use in our models, but we have hardly any quantifiable data for fisheries impact, rate of pollution, the impact of tourism, and so on.  We can’t add these factors to our model, which inevitably means we end up with research that says climate change has this impact on population, which deflects from the problem that there are several factors at play here.”

Mattern thinks gillnets are likely one of those easily ignored factors. Gillnets are hung vertically in the water with to trap fish. The holes in the net are tailored to the size of the fish they seek to catch, but fish aren’t the only animals getting caught.

“The penguins don’t see them, they get entangled in them, and then they drown,” says Mattern.

A 2000 study on the autopsy data of 185 yellow-eyed penguins from 1979-1997 found that 21 deaths were directly attributable to gillnets, another 21 had died in a manner that was in keeping with gillnet death, and fisherman reported killing another 30. In 2015 only 58 breeding pairs of penguins were recorded.

“If you look at the economic value of the fish they are catching, they catch primarily really low value fish that we then eat as fish and chips, as fast food,” said Mattern. “We’ve done some rough comparison, and the four fishermen at the Otago peninsula make a net profit around 1 million New Zealand dollars [680,000 dollars American.”

“Yet the penguins we have here, they bring in the tourism. And it’s been estimated that just a single pair of penguins brings in $250,000 a year to the local economy.  Now, we used to have 200 pairs here—you do the math.”

PopSci did do the math, and it works out to 34 million U.S. dollars.

Mattern notes that a lot of the tours that used to take people out to see the penguins have closed down or have developed new approaches to make the most of the dwindling penguin population. “I’ve got the feeling that in a way the penguins are considered a product that is consumed until it’s no longer there and then we have to move onto something else,” says Mattern. “And that’s really depressing.”

Penguins attract tourist dollars because penguins, along with dolphins, elephants and bears, are known as “charismatic megafauna”—large species with popular appeal.

“You wouldn’t believe how many emails I’ve received in the past few years from people in the United States who have asked me whether they can buy a penguin as a pet,” says Mattern, laughing. “Which is just like—what?!”

“You wouldn’t want a penguin as a pet, believe me, they’re vicious. Their bite is really terrible. Anyone who works with penguins flashes lots of really cool scars on their hands and arms. You can see that they’re related to the dinosaurs.”

The impact of gillnets on the yellow-eyed penguins isn’t definitive, however, because data is so scarce. “There’s hardly any observer coverage because these vessels are too small to have an observer on board and installing automatic systems like cameras, it’s just too expensive,” says Mattern.

And throwing gillnets into the sea isn’t the only ways that humans can harm penguins. Remember, penguins are benthic eaters: they forage off the ocean floor and they prefer incredibly diverse ecosystems. Trawling, which is a method of fishing that drags nets along the ocean floor, removes that biodiversity, shrinking the penguin’s foraging areas.

The issue extends beyond yellow-eyed penguins. Although we tend to think of penguins as dwelling in the Antarctic, only 4 of the 18 species of penguins do. Most live in warmer climates like in New Zealand, Chile, and South Africa. And by and large, they’re not doing so great.

“The penguins that are really struggling these days are the ones that live closest to humans,” said Mattern. “The closer the species live to humans, the greater their problems.”