Birds are changing their songs to shout over traffic noise

Will it keep them from finding love? 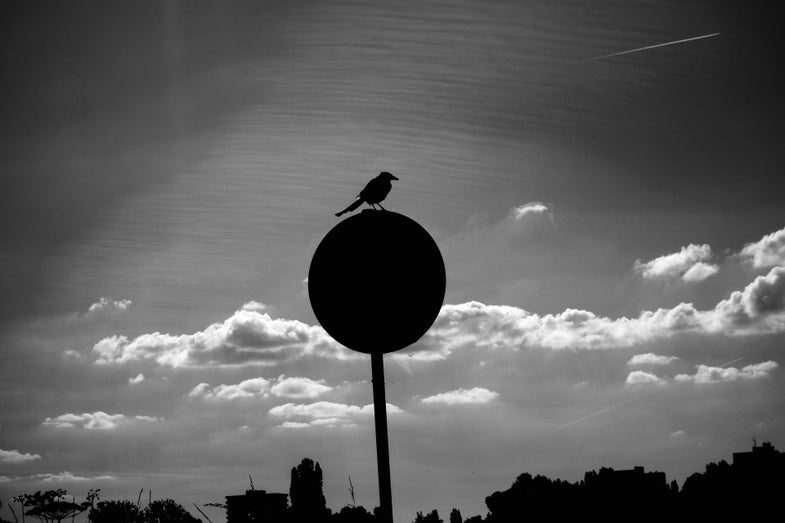 You’re in a crowded bar, trying to talk to a friend above the noisy bustle of drink orders, post-work venting, and awkward first date chatter. All that background noise forces up the volume of your own conversation, making you speak in louder, shorter bursts to be understood.

“Do you want another beer?”

If it’s frustrating to talk like that for a few hours on the weekend, imagine what it would be like to do it almost every day. That’s the situation that birds living near roads find themselves in, with traffic noise subbing in for the bar din.

In a study published in Bioacoustics on Tuesday, biologists recorded bird songs in Rock Creek Park in Washington, DC. They found that birds, specifically the Eastern wood pewee, changed the way they sang when traffic rushed along on nearby roads.

When trying to sing as a track of traffic noise played in the background, the birds sang in shorter bursts, with less variation in frequencies, and a smaller bandwidth, attempting to make their voices heard over the noise. Unfortunately, there’s a trade-off: while they might more easily be heard over the traffic noise, other birds don’t seem to pay as much attention to the altered song, whether it’s a mating call or a male defending its territory. Kind of like a bar. Everyone can hear the guy yelling about shots, but no one really wants to pay attention to him.

The researchers from George Mason University found similar changes in white-crowned sparrows near San Francisco, whose songs have changed gradually over time as human noise has increased.

But it’s not a permanent change. Just like you don’t yell at bar volumes over a Sunday dinner with your family—“PASS THE GRAVY AUNT MABEL,”—birds don’t keep to those volume and tone changes when the traffic noise disappears.

Rock Creek Park offers an interesting setting for the researchers studying this effect. The park closes down a main street, Beech Drive, on weekends from 7 AM Saturday to 7 PM Sunday, allowing bikers and joggers to take over—and giving the birds a break in the process.

During those times, the birds return to their unadulterated song, which the authors suggest might provide a way forward for conservationists looking to preserve a bird population’s habitat.

“The results confirm that temporary measures to reduce traffic noise, such as weekend road closures, can benefit animals and is a feasible and effective option for managing traffic noise,” says lead study author Katherine Gentry.

While shutting down roads permanently would be impossible, the authors suggest that even short, temporary shut downs could help songbirds find their voice again.