In some cases, jellyfish sting care can be a matter of life and death 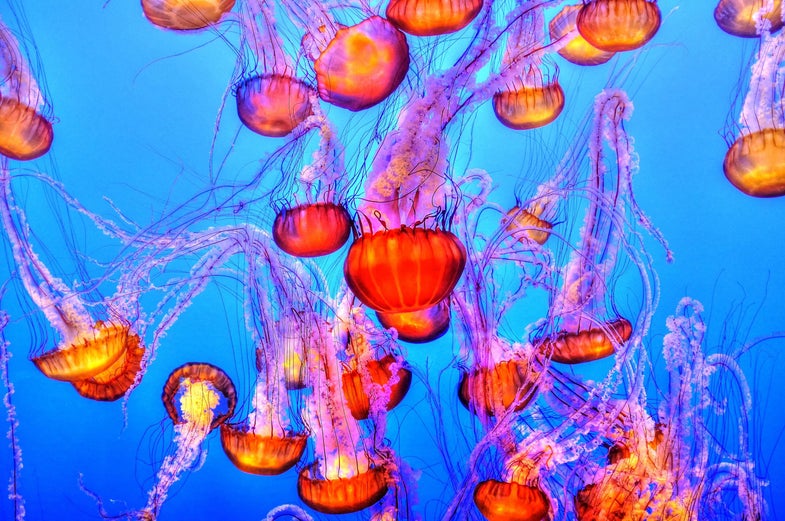 So you’ve been stung by a jellyfish. The good news: there’s no need to get your friend to pee on you. The bad news: all the other solutions you’ve heard of will probably only make it worse.

A jellyfish sting is like a thousand tiny spears injecting you with poison all at once—literally. Their tentacles have millions of tiny lances embedded inside nematocysts, which launch the little stingers out and into your skin upon contact. They latch on, like those little burrs that get in your dog’s fur, and let loose a stream of venom. If the jellyfish that gets you happens to be, say, a box jellyfish, you could be dead in minutes.

If you’re a character from a hit ’90s television series, you’re probably thinking, “yeah, but you can just pee on it, right? Everyone knows that the ammonia or whatever counteracts the sting.” But that’s where you’re wrong. Know what else doesn’t work? Almost everything that Google suggests. Two researchers from the University of Hawaii at Mānoa recently reviewed those purported solutions and found that of all the home-style remedies, only one was really a good idea: vinegar. They published their findings on Wednesday in the journal Toxins.

Most of the sites that come up when you search “what to do if you’re stung by a jellyfish” have conflicting information. Some suggest rinsing with seawater, then scraping away tentacles, then dousing in vinegar or hot water. Others seem confused about the order of the steps, but advocate for almost all potential remedies at some point in the process. No one seems entirely clear on the right answer. But the results from actual scientific studies are much more certain.

For one, stop trying to scrape away the tentacles. Jellyfish nematocysts are triggered in part by pressure, so pressing on them just prompts them to release more venom. You’ll ultimately end up with fewer stingers in your skin than you would if you pulled out the lances with tweezers, but the venom is what really stings—and what could potentially kill you. If you’re stung by a box jellyfish, scraping the tentacles away could actually prove fatal. They’re highly lethal, and forcing them to release even incremental amounts of additional toxin could spell the difference between I-need-severe-pain-killers and welcome-to-my-funeral. And even if you’re just stung by the average, non-lethal jellyfish, you definitely don’t want any more poison in you than is absolutely necessary.

Your best bet in a pinch is to douse your skin—and the tentacles on it—in vinegar. Find the most highly-concentrated stuff that you can and pour it on. Vinegar inactivates the jelly’s nematocysts so they can’t fire, which means when you go to remove the tentacles you won’t end up with more venom than before. Of course, once you treat with vinegar you still have to remove the stingers with tweezers. Or rather, you have to get a friend to don protective gear and do it for you.

Alcohol of any kind will also make the nematocysts fire more, according to research, so don’t go pouring your beach beer on a throbbing jellyfish sting. Seawater is more innocuous, but trying to rinse away the tentacles just means there’s more opportunity for the stingers to latch on to other parts of the body. Shaving cream and baking soda, which purportedly help block the stingers, do almost nothing in reality.

And in a shocking turn of events, by far the most effective treatment for a jellyfish sting was—drumroll please—Sting No More, a product designed to treat jellyfish stings. The spray contains vinegar to inhibit the nematocysts, plus urea to help dissolve the sticky substances that help tentacles adhere. It was the only treatment that allowed the tentacles to be washed away rather than plucked out.

If you know your chemistry, you might be wondering why pee is poo-poo’ed as a remedy when urea—one of its components—shows up in the most effective jellyfish sting treatment. But here’s the deal: while urea does indeed help unstick tentacles from stung skin, human urine is generally too dilute to accomplish this. And while your well-meaning buddy’s pee almost certainly won’t have enough urea to help you out, it may contain enough salt to trigger nematocysts to fire more venom into you.

Once you’ve gotten rid of the jelly using vinegar and tweezers (or some super-concentrated urea), apply heat to the injury. It might seem like you want ice to cool off the burning wound, but heat actually reduces the venom’s activity—so you’ll end up with less damage in the long run. Ice packs actually doubled the size of the damaged area for one of the types of jellyfish studied.

So the next time you’re hanging out at the beach, just bring your handy vinegar. Or, try wearing pantyhose—the smooth mesh protects against many stinging species. Sure, you’ll look a little bit insane. But at least you’ll be ready for this jelly.