These caterpillars chow down on plastic bags

A different kind of metamorphosis 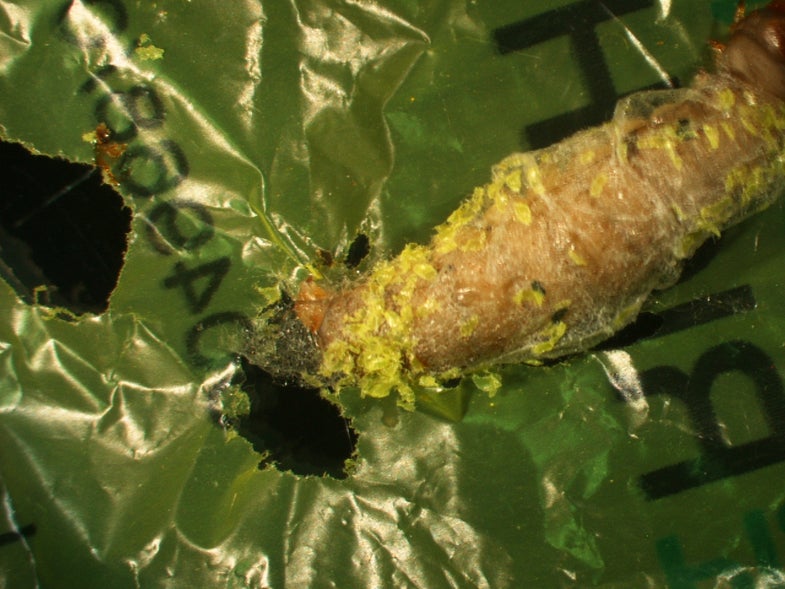 Plastic bags are nothing if not persistent—even when we want them to disappear. We’ve tried banning plastic bags in some cities, or taxing their in others. We’ve come up with replacements made from shrimp shells or biodegradable plastics, which have failed to seize the marketplace. We’ve even tried distilling them into fuel and cooking them into nanotubes.

But as a species, we still use about a trillion plastic bags every year, tempting seabirds to eat junk and generally clogging up landfills. Plastic isn’t biodegradable, but a new study published in Current Biology finds that one tiny creature might help solve our big bag problem.

Meet the humble waxworm, a caterpillar that grows in beehives and eats the wax and honey it finds there. When it’s not eating plastic, anyway. Federica Bertocchini, lead author of the new paper, discovered this ability entirely by accident when she noticed waxworms on the panels of one of her beehives. Amateur beekeepers like herself, Bertocchini said in an e-mail, generally consider waxworms to be pests.

“I removed the worms, and put them in a plastic bag while I cleaned the panels. After finishing, I went back to the room where I had left the worms and I found that they were everywhere. They had escaped from the bag even though it had been closed and when I checked, I saw that the bag was full of holes. There was only one explanation: the worms had made the holes and had escaped. This project began there and then,” Bertocchini said in a statement.

Bertocchini and her colleagues found that the worms could break down plastic in a matter of hours—about a hundred waxworms could eat 96 milligrams of plastic in 12 hours, to be precise. They turn it into ethylene glycol (think antifreeze and polyester) which breaks down in the environment in a matter of days or weeks. Undigested plastic bags, in contrast, are believed to persist in the environment for anywhere between 100 and 400 years.

Previous studies found that another waxworm was also capable of breaking down plastic bags, and mealworms have been shown to safely eat styrofoam.

The next step is to figure out how the waxworms manage the magic trick of making plastic bags disappear.

The researchers think that the waxworms are able to eat plastic bags because the plastic is chemically similar to their normal food, beeswax. This particular study didn’t look at how eating plastic affected the worms, but they didn’t suffer any immediately apparent ill effects.

“They look healthy, although we did not study this aspect. I can say they keep on forming their cocoon as usual,” Bertocchini said.

Bertocchini and colleagues plan to isolate whatever molecule or molecules break down the plastics and see if they can synthesize the chemical on a larger scale. Eventually, they hope that these hungry hungry caterpillars can help them find a substance to break down our very persistent plastic waste.