This ancient whale had teeth, but it still sucked food off the ocean floor

It's a distant baleen relative, and it had the best of both worlds 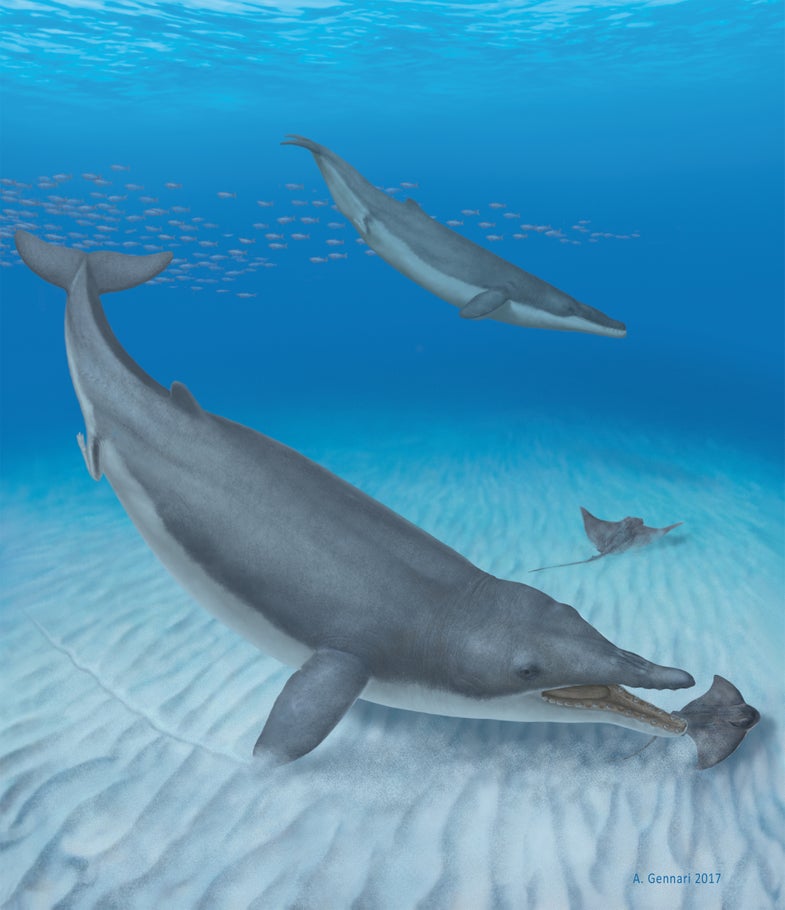 Our present-day oceans host whales like orcas that will hunt down sharks and eat their livers and more sedate baleen whales that gather in awkwardly large groups and feed on smaller fish and microscopic animals called krill.

The latter whales, also known as mysticetes, are filter feeders. They filter their food out of the water and through thick plates of baleen, similar in composition to our fingernails. The former still use teeth. But 36 million years ago, there wasn’t such dentition division.

In a paper published Thursday in Current Biology, paleontologists announce that they’ve found an ancient relative of baleen whales that still had teeth, but also appears to have fed by sucking water and prey into its mouth, then spitting the water back out. It’s not quite filter feeding, but it’s closer to that than other known methods of hunting.

At 12-13 feet long, this fossil whale was rather small (by whale standards), and lived off the coast of what is now Peru.

It had teeth, but the wear patterns on them don’t match those found on modern hunters like Orcas. Instead they had rough pitting, as if they’d accidentally eaten sand along with their meals. That would be far more likely to happen if it was sucking in food—like tasty pre-historic stingrays—near the seafloor than if it was chasing prey through the open ocean.

That evidence, combined with the distinct shape of the fossil skull, led researchers to conclude that the species Mystacodon selenensis fills in an evolutionary gap in the fossil record, marking a transition away from teeth in the baleen whale family tree.

The paleontologists also noticed that Mystacodon has another weird evolutionary feature: rear limbs that stuck out from the animal’s abdomen. This whale, like other whales, evolved from land-dwelling animals. Apparently at this point in the evolutionary process, it still held onto some biological souvenirs from its land-dwelling ancestors in the form of small, residual legs.

The next step is taking an even closer look at the fossils, examining the composition of the bones to check for evidence of the dietary shift.

“We will look inside the bone to see if we can find some changes that may be correlated with this specialized behavior,” study co-author Olivier Lambert said in a statement. “Among marine mammals, when a slow-swimming animal is living close to the sea floor, generally the bone is much more compact, and this is something we want to test with these early mysticetes.”