Science loves them, but don't look at this gallery on your lunch break 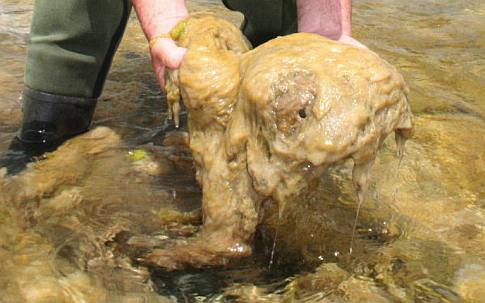 A good dose of nature can still soothe the psyche of the modern human, but sometimes nature, red in tooth and claw, can also just gross you out. Wasps turn helpless caterpillars into a 24×7 buffet for young ones, mama mantis snacks on the head of its former lover, and a frog gives new meaning to oral fixation when nurturing the kiddies.

Go ahead and judge. These creatures don’t care whether they win marks for beauty by human standards — anything goes when survival and reproduction are at stake. They compete to not win any Darwin Awards.

Perhaps it’s time for us humans to reassess our thinking, rather than let an aesthetic sense blind us to natural forms and functions that work well. Maggots writhing in a wound can disgust, sure, but saving a limb without risking an attack by antibiotic-resistant bacteria? That’s beautiful. Check out the following contenders to see if you agree.

Don’t Slip on the Rock Snot

This freshwater alga might ruin your appetite if you happen to stroll by some running water. Didymosphenia geminate likes to attach itself to streambeds by a stalk that feels like wet wool and mimics strands of toilet paper, unlike its slimier algae cousins. Eventually the stalks can form networks of extensive mats that threaten to smother streambeds and ecosystems. It’s kind of scary for an alga with the nickname “didymo.”

Praying mantids have inspired both a 1950s monster flick and a short film by actress Isabella Rossellini and the Sundance Channel. Two large compound eyes (and three simple eyes) peer out from a triangular head that sits atop a long, elongated body. A large female mantis grabs anything and everything it can with its spiky, angled front legs — occasionally going after smaller male mantids during reproduction. She may bite the male’s head off first because it’s closest in reach, but the headless male can still take care of business before becoming a post-coital snack.

Hideous is OK with Hagfish

This is no fantasy pet, but it does resemble a fantasy nightmare creature. Hagfish possess a slender, pinkish body that oozes sticky slime, contains three hearts, and lacks jaws or working eyes. Two pairs of rasps on the tip of a tongue-like projection help the sea beast feed on dead or dying fish near the ocean bottom, as well as marine invertebrates. Babies look no cuter when they hatch as miniature versions of adult hagfish, but all versions can sneeze slime when their nostrils fill up.

Even the giant rat from The Princess Bride looked better. Mole rats sport that lived-in look with pinkish-gray, wrinkly skin and long buck teeth which help them dig underground burrows. A lack of sweat glands and no insulating fat layer beneath the skin mean that they have difficulty regulating their body temperature, and resort to sleeping in piles to maintain warmth. Mole rat society also revolves around a weirdly insect-like structure that includes a queen and relegates most individuals to being workers — so much for a social life.

Bot Fly Gets Under the Skin

Chalk up another mosquito-related annoyance, except this one plants larvae under your skin. The human bot fly first sticks its eggs on the underside of the unwitting mosquito carrier. When the latter bloodsucker begins to feed on a human or other host, the bot fly eggs hatch so that tiny larvae can enter the punctured skin. A successful larva burrows headfirst into the skin and stays there for six to ten weeks before dropping out, employing barbed hooks to hang on for dear life. Oh, and that snout-like protuberance isn’t the larva waving hello — it’s just coming up for air. 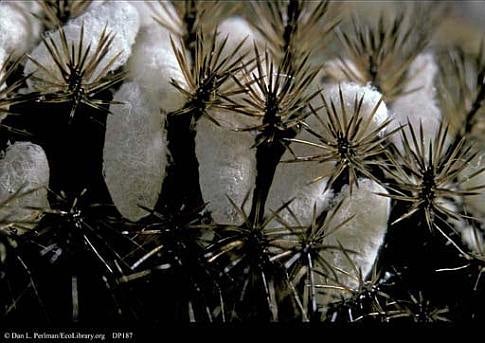 Welcome to the Living Wasp Nursery

A wasp sting is nothing compared to this — the ichneumonoidea family of wasps uses caterpillars, aphids and spiders as unwilling hosts and feedbags for their unborn young. Many times the wasps inject a potent toxin that paralyzes the host and leaves it helpless. The wasp larvae eventually hatch and start feeding on their living host, preserving the vital organs until last. Horrible, yes. But at least most caterpillars don’t have to play zombie-nanny to the babies who had just been feasting on their flesh.

Gastric-brooding Frog Can Stomach a Lot

Parental care may never look the same again. Two species of the gastric-brooding frog were discovered in Australia in the 1970s, and presumably went extinct just a decade later. But first, scientists observed how females swallowed and incubated their eggs in a feat of nurturing that few can rival. Chemical signals from the hatched tadpoles somehow turned off production of hydrochloric acid in the stomach, at least until the tadpoles became froglets and hopped out of mother’s mouth.

Ok, so the phallaceae family name may mislead a bit. Stinkhorn mushrooms have long horrified urban gardeners by springing up rapidly and providing a whiff of fresh carrion or dung scent. Appearances vary from phallic to sea-creature-like, but all the mushrooms emit their foul-smelling slime at some point. The odor attracts eager flies that eventually help spread the fungal spores to other locations, and the beautiful circle begins anew.

A writhing mass of maggots seemed the stuff of horror in battlefield wounds, until surgeons began realizing that the infested areas healed remarkably well. Now maggot debridement therapy (MDT) has gained traction among modern physicians as a way to clean out gangrenous or dead flesh in the wake of surgeries or injuries. The little wonders dissolve dead tissue with the help of digestive juices, before gobbling up the liquefied remnants along with any bacteria. Best of all, a supply of medicinal maggots (typically from the green bottle fly) costs less than $100 for an entire course of therapy.

Tapeworms Make a Meal of Life

This is one weight-loss program you might want to avoid. Tapeworms grow and live inside a host’s intestines, where they get a free lunch off of whatever the host happens to consume. Humans can contract the parasites in the form of microscopic tapeworm eggs from undercooked meats such as pork or beef, not to mention improperly prepared sushi, or from food contaminated by feces from an infected animal. The consumed eggs eventually hatch larvae that can attach themselves to the intestinal walls and grow up to 50 feet.

No, it’s not an escaped denizen from Peter Jackson’s re-imagined Skull Island. The real-life lamprey boasts an eel-like body and a jawless mouth filled with rows of teeth and a raspy tongue. Adults fasten onto the sides of fish to start rasping and cutting into the host, allowing them to feed on the bodily fluids. An anticoagulant keeps the wound open until the lamprey is full or the fish dies. The particularly vicious sea lamprey posed a special threat to the Great Lakes fisheries, at least until scientists found a chemical that killed lamprey larvae in their spawning streams.

Louse Got Your Tongue?

Sometimes a manipulative parasite becomes the manipulated. This isopod crustacean, known as a “tongue louse,” first enters a fish through the gills and chows down on the tongue until it reaches the stump. It then attaches itself to the tongue’s base and feeds on blood from an artery — as well as loose food particles consumed by the fish — even as the fish continues to use the louse like its former tongue. The rest of the fish should still be good, though, so diners need not choke.

Blob Fish Gets By

Blob fish live in deep waters off the coast of Tasmania and Australia, oblivious to the amusement that may greet their odd form and wide lips. Low-density flesh has the consistency of jelly and provides enough buoyancy so that blob fish doesn’t even have to swim. Other fish use gas bladders, but deep sea pressure can grow to 80 times greater than at sea level and render gas too compressed for good buoyancy. Blob fish can just float along gently and wait to gulp down edible food that drifts by. Just don’t laugh. Really.