Glowworms trap dinner in fishing line made of water and urine

To make their silk threads sticky, the bugs spit out a glue laced with urea 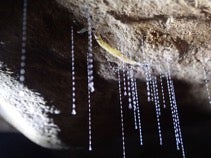 In the dark caves of New Zealand, glowworms spin sticky, hanging threads to catch their prey. These silken fishing lines are dotted with gooey droplets that seem to be made mostly of water—and the animals’ own waste, scientists reported Wednesday in the journal PLOS ONE. This pee-powered glue that is unique in the animal kingdom, and may inspire adhesives for paper and wood.

“We think that the glue is part of the excretion of the waste from the insect and they just spit it out…and attach it to the silk thread,” says coauthor Janek von Byern, a zoologist at the Ludwig Boltzmann Institute for Experimental and Clinical Traumatology in Austria.

New Zealand and Australia have nine endemic species of glowworms, the larval stage of fungus gnats. Many live in the moist conditions surrounding rivers that run through caves, glowing a soft blue-green through the darkness to lure insects into their snares. “They think the bioluminescence is the stars of the sky, so they’re trying to fly out and then get stuck in the glowworm glue,” von Byern says.

Once prey is captured by these sticky stars, the glowworm hauls its bounty up to a nest, using its mouthparts to grip the fishing line and reel it in. It then recycles the materials and cast its lines afresh. “They eat their own waste and then reuse it again, so they’re really very efficient,” von Byern says.

To better understand these fishing lines, von Byern and his teammates plucked thousands of the silken threads from New Zealand’s Spellbound and Hollow Hill caves. They discovered that the droplets dried up when removed from extreme humidity. “Only if you go back into the cave with these high humid conditions, then you are really able to get this glue active,” von Byern says.

The beads turned out to be about 99 percent water, with a dash of other substances that seem to include urea (a primary ingredient of urine). When the surrounding air is damp enough, the urea crystals pull in water to form the sticky droplet.

This is the first time urea has shown up in a bioadhesive, setting paste apart from the glue made by other animals such as spiders. “Normally we have proteins, we have sugars,” von Byern says. Urea is a novel ingredient.

Unlike spiders, which secrete silk from spinneret glands on the abdomen, glowworms forge their fishing lines within their mouths. The glowworms may regurgitate urea (among other materials, the team suspects) from their guts while making the sticky beads. This unique formula might be related to their bioluminescence. “The larva feces could only be excreted through the mouthpart, as the gut ends in the light organ,” von Byern says. “So technically, the feces and urine is the glue!”

Though not as strong as the glue spiders make, the glowworm paste has a few advantages that could inspire adhesives for furniture, paper, or cardboard.

“It was no matter if it was just dry clothes or if it was something wet, it sticks to anything so long as the humidity is above 80 percent,” von Byern says. And once the glue has bonded to something, it stays stuck even under more arid conditions.

The glue has a simpler recipe than that made by other animals, so it might be cheap to mimic. Plus it’s built to last. “The glue is stable for months,” von Byern says. “The fishing lines are hanging there for weeks without getting destroyed…even after two months they still work immediately.”

Spiders and glowworms aren’t the only creatures to make glue. “Depending on what the animal needs the glue for, it’s differently composed and has a different strength,” von Byern says. Some shellfish make a glue to bind themselves in place, while salamanders secrete glues from their skin to gum up the jaws of hungry snakes.

But these glues might have their own uses in the realm of medicine, von Byern says. Salamanders and snails could inspire wound dressings and skin adhesives. “The barnacle, with its foam-like cement, could be good for cartilage or bone fractures, as it is stable for a long time, flexible and very light,” he says.