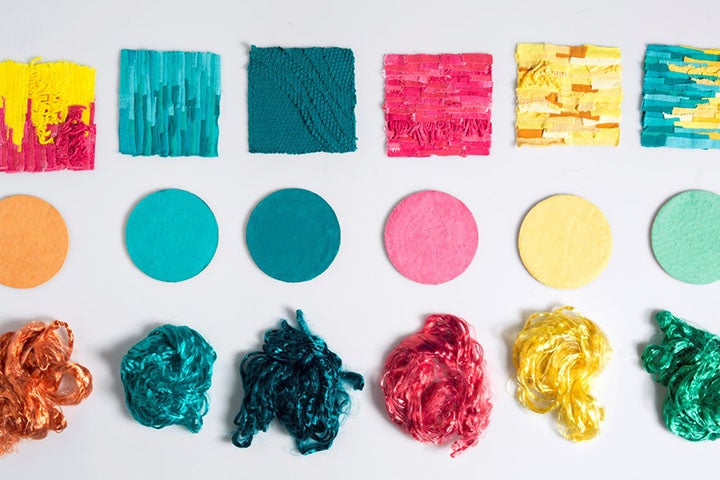 A few years ago, the New York Public Library extricated a wardrobe survey printed in the 1941 edition of the magazine Design for Living from its archives. The survey, which peered into the armoires of collegiate women across the country, is a fascinating time capsule—and not just because pants are conspicuously absent.

The women’s sparse closets are shocking by current U.S. standards. Most owned as few as three and half blouses, and maxed out at 11. These days we tend to own more clothing—a lot more. Data is scarce on men (because stereotypes) but a 2014 Alliance Data survey found that 37 percent of women own between 25 and 49 blouses. This uptick in our shopping habits means increased waste. Fast fashion retailers like H&M and Zara deliberately design their clothes to be worn only a handful of times and textiles are difficult to recycle, so some 85 percent of our outfits end up in landfills.

At the annual meeting of the American Chemical Society this week, researchers from Finland’s Aalto University presented a new recycling method that might make our frenzy for fast fashion just a little bit more sustainable.

To understand what the researchers accomplished, you first have to understand what currently passes for fabric recycling. Most clothing isn’t actually recycled; it’s reused. Some of it ends up on the shelves of local thrift stores and second-hand shops, but most of our ironic t-shirts and fashion missteps are shipped to countries in Asia and Africa, where development experts argue their influx hurts local textile markets. A smaller amount is cut down to make industrial cleaning rags and insulation, while an even smaller percentage is turned back into raw fiber elements, a process known as fiber conversion. Fabric conversion sounds fancy, but in practice it’s pretty barbaric.

“They [physically] tear fabric apart to maybe make some new yarn by adding a bit of new fibers,” said Simone Haslinger, a researcher in the department of bioproducts and biosystems engineering at Aalto University. “So, they get this blend of new and old fibers.”

After fabric is basically shoved through an industrial shredder, the resulting textile is (shockingly) not as strong or as versatile as its source material. So the results of fiber conservation are often down-cycled or turned into carpet or paper rather than being recycled into a new shirt. That means that while currently available textile recycling methods might keep some of your trendy tops from being a total waste, it’s difficult to create a system where shirts beget new shirts and keep fashionistas from constantly pouring resources into clothing.

What Haslinger and her colleagues at Aalto University have been working on is a way to essentially close the loop—that is, turn an old shirt into a fiber that can be spun into a new shirt. About five years ago the team, lead by Herbert Sixta, developed a technique that dissolves cellulose (the plant fiber in fabrics like cotton, rayon, model, and tencel) and turns it into a material that is stronger than rayon. But that technique only worked on completely natural materials—not the poly-fiber blends that have become the mainstay of modern clothing. This new technique, developed by Haslinger, extracts the natural fibers through a process they call Ioncell while leaving the polyester behind. The resulting fabrics are beautiful.

To transform a poly-cotton blend t-shirt into a new shirt, Haslinger exposes the fabric to an ionic solvent—essentially a salt—that’s chemically modified to have a lower melting point.

“When you compare it to sodium chloride, for example, it has a melting point at around 1,400F,” said Haslinger. “By chemically modifying this component, we could get a melting point that’s around 140F, but it still has a lot of properties that are similar to salt. That’s why it’s actually able to dissolve cellulose, which is hard to dissolve otherwise.”

Exposing the material to a solvent extracts the cellulose—Haslinger stresses that all of the chemicals in Ioncell-F the process are environmentally benign—while exposing it to an anti-solvent creates a gooey mass of cellulose. The mass is put through a sort of press that extracts thin strands of fibers which can then be woven into new fabric as strong as tencel, a silky fabric made from wood pulp that’s beloved by some environmentalists because of its closed-loop process.

The whole process seems rather labor intensive, until you think about the work and chemical input it takes to plant, grow, harvest, spin cotton into threads, and then weave it into fabric. Still, the Ioncell-F technique isn’t perfect. It can’t handle fabrics that contain elastane (better known as spandex), which is quite a handicap in the realm of stories like Forever21. And right now the process requires that the fabrics be bleached and then dyed again after the fabric is remade. Haslinger hopes that with better industry cooperation, they’ll be able to sort fabrics by color in the future. If all blue textiles showed up at the recycling plant in the same pile, the Ioncell-F process could keep their dyes intact—thus reducing the environmental impact of the new fabric even further.

But don’t run off to the sale rack just yet: if our desire for clothes continues to grow, no amount of recycling will be able to negate the waste. There’s still something to be said for buying fewer items. The greenest shirt, after all, is the one you already own.