Octopuses can basically edit their own genes on the fly 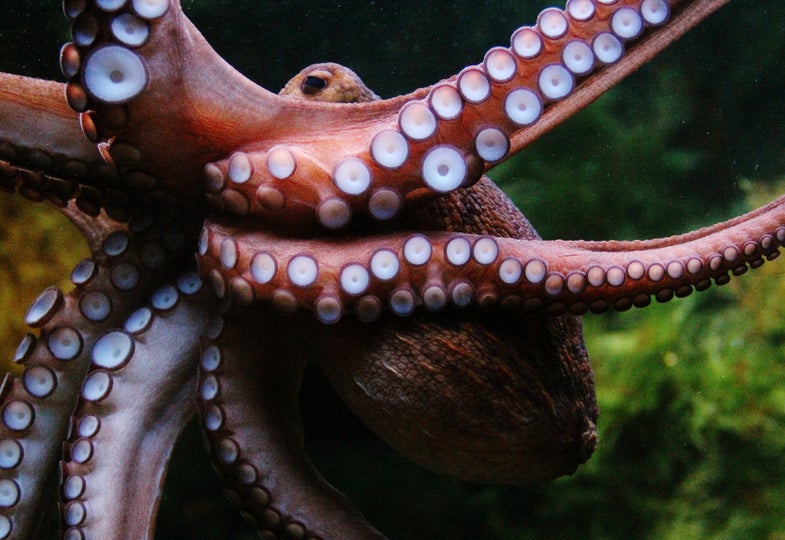 You’re a complex organism. You socialize with family and friends, you solve puzzles and make choices. Humans may be some of the most cerebral animals on the planet, but we know we’re not alone in having this sort of behavioral complexity. Crows use tools. Primates create incredible social structures. Whales congregate.

But all of these critters have one thing in common: they’re vertebrates. Members of our subphylum share more than just a backbone; our common ancestor gifted us with the sort of structure and central nervous system that lends itself to behavioral complexity.

And then there are cephalopods. They can solve a shocking number of complex puzzles, suggesting a cognition that rivals those found in the vertebrate world—even though they last shared a common ancestor with us at least 500 million years ago. In the world of invertebrates, octopuses, squid, and cuttlefish stand apart.

We may finally have some idea why. According to a study published in Cell, these creatures have an uncanny ability to manipulate the instructions found within their DNA. An unprecedented panache for RNA editing may explain why cephalopods are so bright and adaptable.

You probably remember RNA from your high school biology class. DNA is like a blueprint of genetic instructions laid out for us at conception. DNA is stable and sequestered (mostly) in the nucleus, keeping genetic information safe to pass it on to the next generation, while its single-stranded sibling RNA translates those directions into marching orders. When DNA says “we should produce these proteins at this time”, RNA goes out into the world of the cytoplasm and makes it happen.

But sometimes RNA rebels. Sometimes enzymes intervene, pulling out the RNA adenosine bases that code for certain proteins and replacing them with inosine bases instead. When this happens, the RNA can be ‘edited’ to produce a different protein than the one called for by the DNA.

“About 25 years ago, people identified the first example of RNA editing in mammals. There were a few cases where you’d see the DNA saying one thing and then see the actual protein was different,” says study co-author Eli Eisenberg, a biophysicist at Tel Aviv University in Israel. Eisenberg co-lead the study with Joshua Rosenthal at the Marine Biological Laboratory, though both point to Tel Aviv’s Noa Liscovitch-Brauer as the driving force behind the research.

For a couple decades, Eisenberg says, study of this phenomenon was limited to a handful of cases found by accident. But in recent years, scientists have made a more systematic approach—and found that humans occasionally use this genetic trick, too. But for us, it’s a rare occurrence. We have many sites where editing could occur, but most are located on parts of the genome with ‘junk’ DNA that doesn’t code for anything. Of the 1,000 or so coding sites where editing could take place, only a few dozen exist in places where the editing would likely have an important impact.

Squid, which have the same number of genes, have around 11,000 of these useful sites.

The new study, which tracked down the RNA editing sites in several species of cephalopod, built upon earlier research that found that octopuses use RNA editing to rapidly adapt to temperature changes, and that extensive editing occurs in squid neural tissue. In examining additional species, the researchers determined that this boon of editable RNA is almost universal among cephalopods—and the exceptions that prove the rule provide some fascinating clues.

All members of the “coleoid” subclass—squid, cuttlefish, octopuses—that the researchers examined had this boost in RNA editing. But the chambered nautilus, which is considered a primitive beast in comparison to its whip-smart cousins, had much lower levels of RNA editing. An even more distant mollusk cousin (not a cephalopod) tested for comparison had similarly low levels.

Because so much of the RNA editing occurs in brain tissue, the researchers think this correlation could indicate that the process helps give some cephalopods their smarts. Exactly how or why this process occurs is a question for future studies. But one thing is for certain: RNA editing can make a species incredibly flexible.

“For us, generally when we have a gene, the coding can be improved through mutation. That’s the general picture of evolution, where a mutation comes along to adapt the protein to the needs of the organism,” Eisenberg says. “But when you change the DNA, it’s hardwired. You change it, and that’s that.”

The process of RNA editing is much more adaptable.

“You might edit the RNA in one tissue, say, the brain, and not in another, like the muscle,” Eisenberg explains. “You can have the old protein produced under normal conditions, and a new one when you’re under stress. You can edit it or not to varying levels—you can have the edited and unedited version in the same cell, working together.”

Researchers have already seen that octopuses who have to adapt to changing temperatures use RNA editing to do so, but the possibilities are truly endless. Eisenberg and his colleagues hope to investigate other environmental changes—like ocean acidification, a growing concern in the age of climate change—to see what kind of whacky adaptations a cephalopod might implement as needed.

So if RNA editing is such a cool trick, why don’t humans do it more often?

“That’s a question we can just now start to answer, because now we have these animals who do it all the time to compare ourselves to,” Eisenberg says. “But we do have some idea of the price that they pay.”

It seems likely that cephalopods have made a serious evolutionary trade-off: In order to maintain the flexibility of extensive RNA editing, they may have given up the ability to make hardwired genetic changes by way of mutation. In other words, their evolution may be stunted. This is because the structures that allow RNA editing to occur are complex and must sit in precisely the right part of the genome. The sorts of mutations that help humans adapt and survive from generation to generation would likely hinder a cephalopod’s ability to undertake on-the-fly editing with such aplomb.

“These results fit well with what has been characterized previously in cephalopods, but are otherwise unexpected from what we know about other animals, highlighting the importance of studying many different organisms to learn about how biological systems work,” says Carrie Albertin, a researcher at the University of Chicago who was not involved in the new study. Albertin, part of the team that sequenced the octopus genome for the first time, hopes the results can help give us insight into the largest brains in the invertebrate world. “These findings are very exciting.”

So basically, cephalopods continue to be weird as hell. Hopefully future studies can help us figure out just how and when they undertook this fascinating evolutionary strategy—and whether it truly is the secret to their brilliance.