A gentle future of flapping fishbots 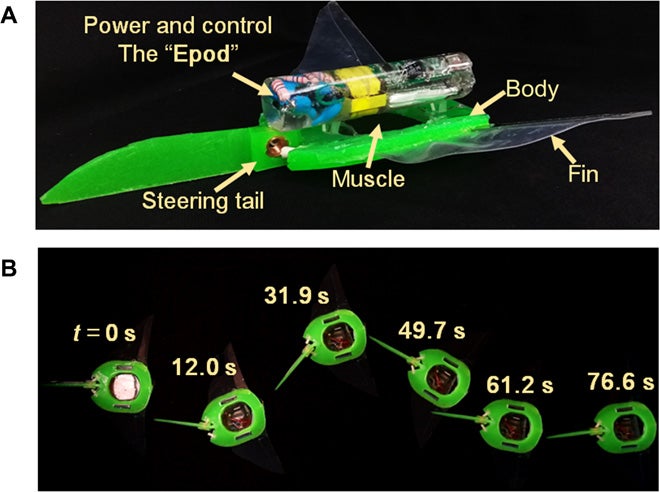 Imitating nature is a lot harder than it looks. Early aircraft inspired by birds literally failed to take off, and it’s only recently that we’ve seen humans make flapping, flying robots. Creating a machine that moves like a fish is hard; much easier to bypass how nature did it and just use a boat, as humans have done for centuries. But with soft robotics, the rigid constraints of construction no longer constrain human designers. Instead, we can see flapping, swimming machines, a rough draft at mechanical manta rays.

Here is a side view of the soft, manta-inspired robot as it flaps through the water.

This robot is the work of a team of researchers at Zhejiang University in China. It’s got a soft body, it’s all-electric, and it can move at over 12 feet per minute.

“The robot is mainly for the exploration of ocean, rivers and lakes, and to monitor the data like temperature, water density and chemical components,” says Tiefeng Li, principle author of the study. Beyond that, Tiefeng envisions the robot as a tool to “explore the bottom of the ocean, investigate shipwrecks,look for planes that have crashed into the ocean, and to monitor creatures under the sea.”

And when built with a transparent body, the robot becomes almost invisible in the process. That, combined with a body so soft it won’t damage coral, means robots like this could be invaluable scientific tools for exploring the nooks and crannies under the surface of the ocean.

With clear, flexible membrane fins, and a transparent body, the robot almost disappears against the water.

The robot can operate in near-freezing waters, just over 32 degrees fahrenheit, and temperatures up to 160 degrees fahrenheit, warmer than it’s likely to encounter anywhere except deep sea vents. And like other soft robots, it uses a flexible membrane that changes shape with electric charge. Unlike other robots, in this fish-bot the membrane isn’t insulated, instead used the weak conductivity of the water around it to both carry the current to the but and ground the bot so it doesn’t shock anyone that touches it.

The result is a nimble little sea pancake. Watch it in action below: