Why corgi mixes look like adorable munchkin versions of other dogs 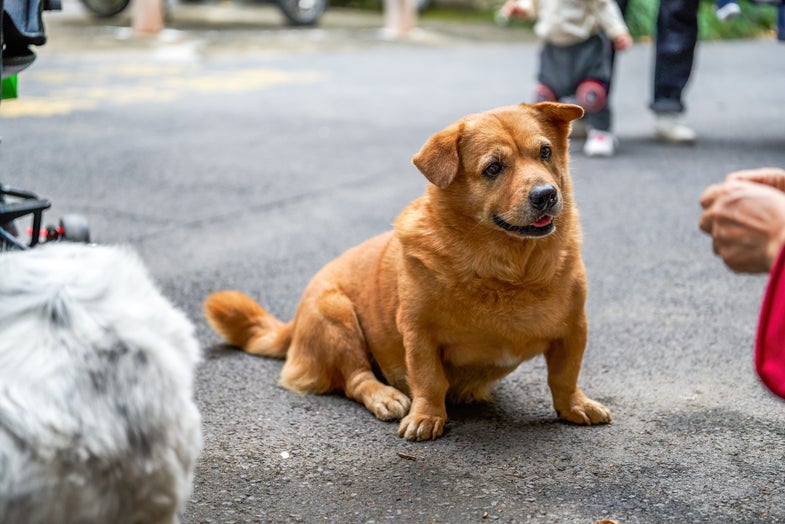 It’s very important that you look at these pictures of stumpy-legged doggos. You know, for science.

These good boys and girls are all corgi cross breeds, and people have pointed out that they all seem to look like you took a normally proportioned dog and just chopped off half of each leg. And they’re not wrong.

Scientifically speaking, they’re almost spot on. The reason corgis have those sweet lil’ legs is that they all suffer (albeit adorably) from the same genetic condition: achondroplastic dwarfism.

Being a corgi mix might explain this awesome guys short legs. I met him at a cafe in the Caribbean 🙂 pic.twitter.com/svskJlFx3H

The first short-legged puppers happened by accident some 300 plus years ago. When people were starting to breed dogs for specific traits, they found some happened to have these miniature little legs with normally proportioned bodies. And those dog breeders who thought that was freakin’ adorable decided to start breeding those vertically-challenged pups with other dogs in an effort to pass along the condition.

Here’s a Corgi-pit bull I met in Austin, Texas. pic.twitter.com/mMSYiH29tm

Back then, probably around 50 percent of the litter would end up with shorter legs. That’s because dwarf dogs have a dominant gene that makes them so stumpy: it’s an autosomal dominant gene, which means it’s a gene present on one of the non-sex chromosomes—and you only need one copy of the gene to have dwarfism.

A dog with only one copy will have shorter than average legs, though because of the way the mutation works it might not be quite as short as your standard corgi. The way to get the shortest possible legs is to breed two dogs with the same mutation together. Odds are, a litter of four puppies from that cross will have one dog with two copies of the short mutation—the stumpiest doggo of them all.

In 1941 at a lab at the Wistar Institute in Philadelphia, a man named Charles Stockard put that theory to the test. He wrote a lengthy book on the topic called The Genetic And Endocrinic Basis For Differences In Form And Behavior, which features this diagram showing his cross-breeding efforts:

The pictures marked “F1” are two of the short-legged offspring of a normal-abnormal cross-breeding, and then “F2” are the offspring of those offspring. Yes, in dog breeding it’s fine to have siblings mate. Or at least it was back in 1941.

The gene that carries the short-legs mutation is called fibroblast growth factor 4, affectionately known as FGF4. Fibroblast growth factors help determine how much to allow different parts of your body to grow, both when you’re a fetus and as you mature into an adult. Dogs who have a mutated copy of FGF4 basically have bones that are told to stop growing too soon, but since FGF4 affects only their limbs, they end up with normally sized bones everywhere else. Two copies of the gene means even shorter leg bones.

Saw this baby at work, he’s half corgi half Rottweiler 🙂 pic.twitter.com/8vaWq9G1CF

Since corgis have been bred with each other for so long, today’s little dinguses pretty much all have two copies of the FGF4 mutation. Because of that, breeding a corgi with any other dog will always give you a short-legged dog. And sometimes, it looks like a stumpy version of a normal breed. It’s not so much that this happens all the time, because it doesn’t. Some dogs end up looking like a pretty even mix:

my shitzu/corgi mix looks like neither a shitzu nor a corgi and he is 100% satan. pic.twitter.com/CJCUbRmIsC

It’s that we notice it more when dogs pass on very distinctive coat patterns along with stump legs. But in any litter of corgi cross-breeding, there are likely to be puppers that have more of a corgi coat. They just don’t end up on Twitter.

The same thing also works for basset hounds and dachshunds, incidentally. They have the form of achondroplasia that corgis have, so crosses to those breeds will also be short in the leg department.

Works for Basset hounds, too! Here’s our short guy! Looks like a spaniel but short like a basset or maybe Corgi! Who knows!! pic.twitter.com/mcZtADmlDP

So next time you see a little stump dog, just remember: it’s a mutant. Just an adorable one.

blue heeler mixed with a corgi is my pupper pic.twitter.com/d2FuneZ6x7