Why won’t my shoes stay tied? Scientists are trying to figure it out. 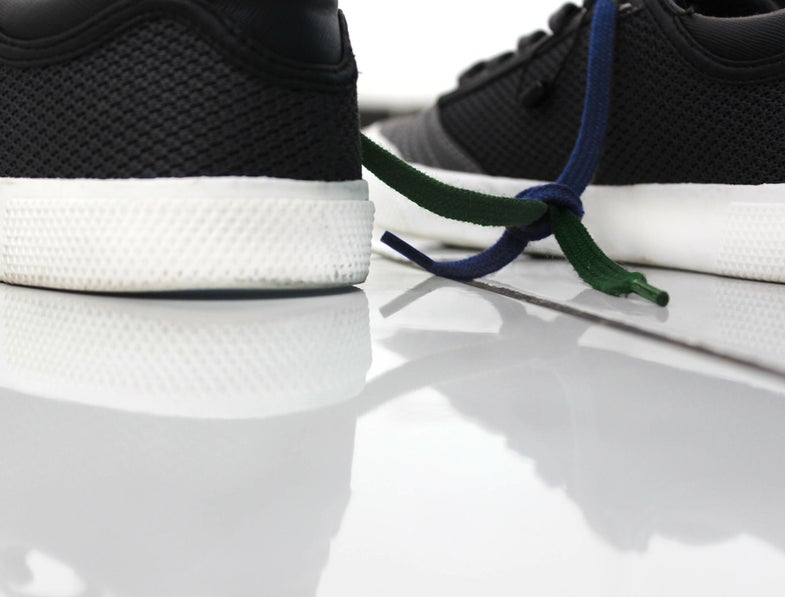 Shoelaces are great until they get untied. Pexels
SHARE

Oliver O’Reilly has a dilemma that plagues most of us.

“I have a chronic problem with my shoelaces—they keep untying,” he told PopSci. “I never understood quite why that happened.”

O’Reilly, a professor of mechanical engineering at the University of California, Berkeley wasn’t interested in tying a better knot—at least not yet. He and his colleagues, Christopher Daily-Diamond and Christine Gregg, simply sought to understand the mechanism behind this ceaseless shoelace vexation. The results of their inquiry were published today in the journal Proceedings of the Royal Society A.

According to their findings that poor knot takes a tremendous amount of force when your foot strikes the ground—sometimes as much as seven times the force of gravity, or 7gs—which deforms the shape of the knot. At the same time, the flapping motion of the shoelaces as your foot swings adds additional forces. Those forces combined take your laces from tied to untied with ease.

“We borrowed a high-speed motion camera from a colleague,” said O’Reilly. “Christine [Gregg, co-author on the study] put on some running shoes and ran on a treadmill—the slow-motion video just told its own story. You could really see the shoelace becoming untied.”

The study highlights the growing benefit of high-speed cameras in scientific research. O’Reilly likes to develop mathematical models and analyze them for mechanical or physical systems. He points to a toy called Euler’s disk, which is essentially a disk spun atop a mirrored surface. As the disk loses energy, the mirror starts to vibrate—then the disk lifts off.

“You can develop a model for this,” said O’Reilly, “but if you look at it with a high-speed camera, or even slow motion from your iPhone, you can actually see waves as the mirrored surface is being vibrated by the disk. You can see those effects that you could not normally see and you can say, ‘oh, I need to include these in any models that I develop of the system.'”

The more scientists know about the physical system, the better the mathematical models can be, and the better they get at modeling new things—perhaps one day, a knot that stays knotted until we tell it to release.

The researchers also put laces tied with varying knots on a pendulum to systematically test which were strong—that is, resisted getting untied—and which ones were weak. Some knots were stronger than others, but all knots eventually failed.

O’Reilly stresses that this is just a start, not an endgame. The physical mechanics of why a knot fails—that is, what makes a strong knot outlast a weak knot—is still not well understood. And the broader physical mechanics of knots, or what happens to a knot as you apply different forces to it, remains something of a mystery.

On the surface, understanding knots might not seem like a big deal. After all, one can always wear slip-ons.

But knots have broader applications.

“When you talk about knotted structures, if you can start to understand the shoelace, then you can apply it to other things, like DNA or microstructures, that fail under dynamic forces,” said Christopher Daily-Diamond, co-author on the study and a graduate student at Berkeley, in a statement. “This is the first step toward understanding why certain knots are better than others, which no one has really done.”

Similarly, knots are used in places other than shoelaces—sometimes with deadly serious consequences. You only have to look at the rigging on a sail boat, or heavy lights hung from the rafters of a theater, to see how one bad knot could cost someone their life. And then, of course, there’s surgery.

“Understanding how forces applied to a knot will impact the knot is really important for sutures, for surgical knots,” said O’Reilly.

Right now, sutures get heavily tested—doctors and researchers tie knots and mess with them until they break—to show surgeons what string and knot combinations will hold up over time.

“It’s amazing that surgeons are able to tie knots inside your body with sutures that work for such a long period of time,” said O’Reilly. “But actually understanding why a knot fails, what are the forces inside the knot itself, the deformation inside the knot, that’s a very difficult problem.”