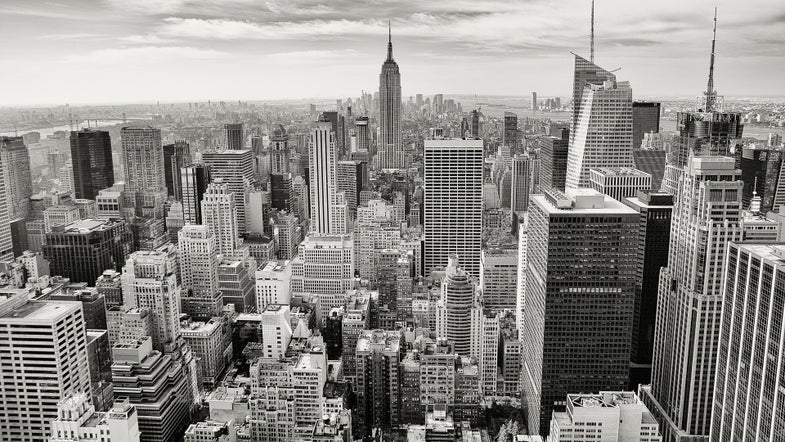 Time travel is usually only possible in one direction: plodding ever-forward at the pace of a ticking second hand on a clock. We can’t make leaps into the past or future, however much we’d enjoy the break from our present.

But maybe your ears can listen to the whisper of a world four centuries in the past.

Starting on Thursday, and running through Monday, May 8, visitors to the Wonderful Behaviors exhibit near New York City’s High Line park will be able to listen back in time with virtual reality. The installation will include the 1609 soundscapes of four different locations in New York City—before Europeans arrived in Manhattan.

Don’t worry. If you can’t make it to New York City this week, you can still experience audio time travel using your smartphone or computer on the project’s website—or check out a full-length trip with the 360 degree video below.

The audio/somewhat-visual experience–Calling Thunder: The Unsung History of Manhattan–was inspired by Eric Sanderson’s Mannahatta project. Starting in 1999, Sanderson began cataloguing and documenting what the landscape ecology of the island of Manhattan was like long before Europeans arrived. That included looking at old maps, historical records, soil cores, and other information to piece together what the island would have looked like—and what lived here—before we paved the place and peppered it with skyscrapers.

Even in the most wild parts of modern Manhattan, like Inwood Hill park, noise from human activity permeates every part of the city today, much like it does around the world.

Designed by interactive designer David Al-Ibrahim and audio producer Bill McQuay, the narrated soundscapes of Calling Thunder take you from the present-day settings back in time to when birdsong and the crashing of waves replace human conversations and the rumble of traffic.

The idea started with Al-Ibrahim and McQuay considering the idea of what it might be like to explore the natural history of a small city park through virtual reality, but when they began looking into the wealth of data accumulated by Sanderson’s project, now re-named Welikia, the project took on new dimensions—allowing them to expand their scope beyond a site-specific project to one that could be enjoyed around the world.

“New York is an iconic urban landscape,” McQuay says. “But it, like every other city, is a recent development in terms of what was there 400 years ago.”

In the 360 video, modern sounds from four locations fade gradually into the noises that preceded them, as the modern landscapes fade into simple outlines of trees or landscapes.

“I think Bill put it best, the visuals are almost like a coloring book to fill in the soundscapes with your imagination,” Al-Ibrahim says. They tried doing sounds without any visuals at all, but early feedback from participants revealed that a lack of visuals was more distracting than immersive. Some light illustration allows listeners to really sink into the sound.

The team got their audio from McQuay’s workplace at The Cornell Lab of Ornithology’s Macaulay Library, which contains millions of wildlife sounds from around the world. By matching up the landscape and ecological data from the Welikia project, McQuay created ‘field recordings’ that recreated the noises of the 17th century, adjusting the sounds from the database to accommodate how sound might bounce off trees or the open water to create a realistic 360 degree sound experience.

McQuay’s ornithologist colleagues helped him figure out the likely proximity between different species of songbirds or other animals. “I’d hear: ‘Well, it sounds interesting but he wouldn’t be there, that other species should not be close to this species, you need to move it further down’,” McQuay laughs. “I thought oh shoot, I thought that it sounded good!”

McQuay and Al-Ibrahim hope to continue to work with Sanderson and his data to build out the project, which is still in its infancy. Given continued funding and resources, they’d love to generate an immersive experience for any given location on Manhattan, potentially even including other sensory feedback. Getting to experience the smells of pre-hot-garbage Manhattan doesn’t sound half bad. But for now, they’re focused on making audio time travel available on devices that you carry with you every day.

“We can only hope that they experience a greater consideration of what we have, and what can be,” Al-Ibrahim says. “What might it be in the future? There is potential to have this island sound very different that it does today.”