Plagued by predators in the sea, these fish are moving onto land 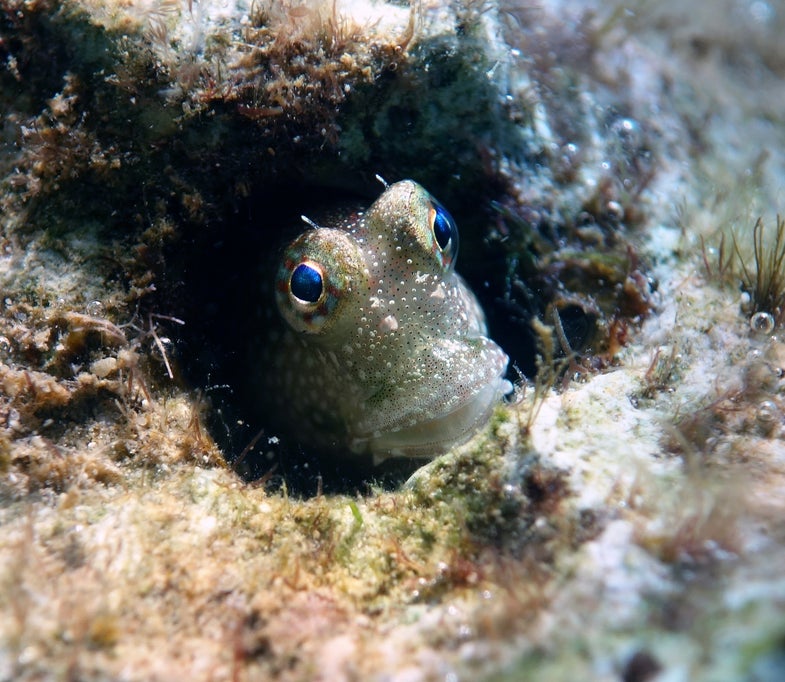 Blennies hide for good reason -- they're far more likely to be eaten in water than on land. flickr user Sylke Rohrlach
SHARE

On the remote Pacific island of Rarotonga, some fish are fleeing to land.

Scientists have long suspected that blenny fish leapt out of water to escape the many sea creatures that seek to eat them, but the blennies’ true motivations remained a mystery. Now, in a study published this week in The American Naturalist, researchers show that these sausage-shaped fish were over three times more likely to be devoured in the sea than on land, giving credence to this theory.

“It turns out the aquatic environment is a nasty place for blennies, full of enemies wanting to eat these small fish. But life is less hostile on the rocks, with birds their main worry,” says Terry Ord, the study’s lead author and evolutionary ecologist from the University of New South Wales, in Sydney, Australia.

To find out, Ord and his team visited Raratongo Island, where several species of blenny are regularly found lying on the ground near the water. The team fashioned 250 fake plastic blennies, about 2.5 inches long, with lifelike colorings and patterns. Half of the mimics were put in the water, and the other half were fully exposed on dry land. Predatory attacks on the mimics were observed over eight days, and the results suggest that blennies are much safer on land. “There were at least three times more attacks on our model blennies placed in the water than there were on models positioned on land,” says Ord.

So although being hacked to death by predatory seabirds surely isn’t a great way to go, it seems the blennies prefer that alternative to whatever ravenous creatures lurk in the sea.

The team also observed the behaviors of real-life blennies. At low tide, most of the blennies migrated to the rocky shelves above the water. And as the tide rose, they moved with it, taking refuge at higher ground, “apparently to avoid being eaten by aquatic predators coming in with the rising water,” explains Ord.

Ord doesn’t think this is just a survival technique, like mountain lions and bears scrambling up trees when they sense danger. He thinks that blennies are in the process of moving out of the sea and colonizing land on a more permanent basis.

Although lacking legs, they do seem comfortable on the ground. They don’t just spend a considerable amount of time there (although Ord notes it’s difficult to measure how much time each blenny spends out of water), they also hop around to different rock crevices and socialize with each other, explains Ord. Perhaps most compelling, there’s a blenny species that hangs out on the same rocks as the truly amphibious fish, and “spends its entire adult life out on the rocks in the splash zone,” he says.

What’s more, the land-seeking habits of the blenny are seen in disparate places around the world. Ord cites Guam and Japan in the North Pacific, Tahiti and Rarotonga in the South Pacific, and Mauritius and Seychelles in the Indian Ocean as examples.

The blenny has a long way to go before it’s a full-fledged land-dweller, but it’s doing pretty well—for a legless fish. They breathe mostly through their gills, but can get some oxygen through their skin, says Orb. And they’re “reasonably agile out of water because of their general sausage-shaped body, and by use of their tails to shuffle and even hop across intertidal rocks,” he says.

In time, we’ll see if the blennies continue their march towards dry land, a place where they’re less likely to be chomped and munched on. For now, let’s keep mum about their ambitions, lest more predatory sea birds—or Guam’s two million snakes—catch on to the scheme.