Whatever you do, don’t set your pet goldfish free in a stream

It does not belong there 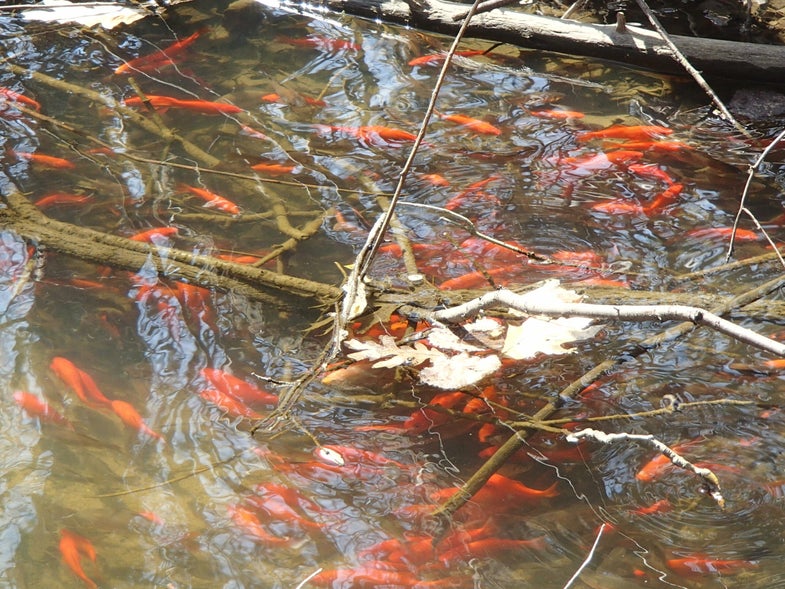 There are so many excuses. You won a goldfish at a raffle, but you have a herd of curious cats at home. You got the goldfish in the breakup, but you travel too much to meet its needs. Your kids won’t take care of the goldfish, and anything is better than watching that poor creature suffer.

There are plenty of reasons why people might decide they don’t want a goldfish. If you find yourself hating your fishy friend there are ways to get rid of it other than committing fishicide and sending its soul to the great big fishbowl in the sky. You can give it to a friend, give it to a stranger, but for the love of everything in the ecosystem, do not set it free in your local pond, stream, or any other body of water.

Why, I hear you ask. Why can’t I loose Nemo in a serene wild spot, and let nature take care of the rest? Because goldfish are remarkably adaptive, persistent, and fecund fish that can not only survive in your local pond, but dominate it. Given more space, they grow larger, sometimes up to four pounds. Budling a backward pond and stocking it there can be the perfect solution for your goldfish life.

Michigan’s Department of Natural Resources (DNR) was recently alerted to a small stretch of stream flowing between two lakes that was utterly packed with goldfish. They don’t know exactly how the goldfish got there, and may never know the whole truth, but it’s possible that a few pet goldfish were released into the area and set up house.

There were an estimated 8,000 goldfish in that waterway, and workers with the DNR were only able to remove about half of them—a whopping total of about 450 pounds of goldfish.

While some populations of goldfish have become established parts of the landscape, acclimating by adapting more muted colors, they are seen as a non-native species and a threat to native populations.

“It means they’re taking up all of the resources of fish that should be there,” says Sara Thomas, Lake Erie Unit Manager for the Michigan DNR fisheries division. “Only one or two native fish were found in that stretch.”

Michigan isn’t the only state confronting a goldfish problem. In Minnesota, a nature center is introducing largemouth bass to devour the out-of-control goldfish population. Colorado was debating whether or not to shock invasive goldfish, or scoop them up and feed them to wild fish. And up in Canada, goldfish are thriving in storm ponds, even after being chemically treated.

Long story short: given the opportunity, goldfish will grow forth and multiply. So if you love it, please, please, do not let it go.