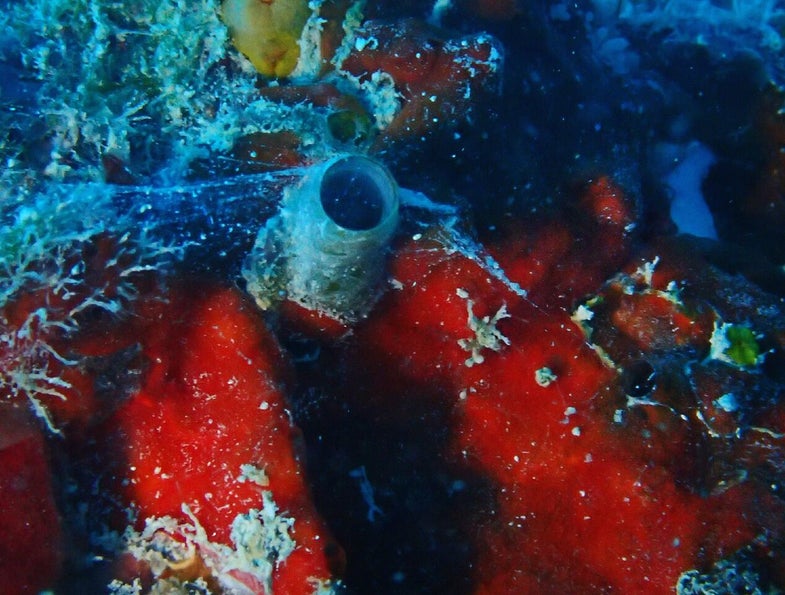 Sure, radioactive-spider bite powers are cool and all. But imagine having the superpowers of a worm-snail. The new species Thylacodes vandyensis, reported Wednesday in the journal PeerJ, is getting compared to the superhero—as if we didn’t have enough spidermen running around already.

Just as Peter Parker shoots super-strong spider silk from his wrists (or something), this stationary, sea-dwelling worm-snail spews mucus from its “giant slime glands”.

And oh, what marvelous slime glands they are.

“Normally, snails produce a trail of slime so that they can glide on it in order to move,” lead study author Rüdiger Bieler, Curator of Invertebrates at Chicago’s Field Museum, said in a statement. “But worm-snails are stationary—what did they need slime glands for?”

Fighting crime, duh. Or hunting, anyway. As Bieler noted, worm-snails are homebodies. They attach their tube-shaped shells to a hard surface like a rock or reef not long after they hatch, and that’s that. It’s hard to be much of a vigilante when you spend your adult life stuck to a rock, but Thylacodes vandyensis uses its glands to produce edible mucus nets to rope in dinner.

“The snails have an extra pair of tentacles down near the base of their body, almost like little arms. These tentacles are what they use to shoot slime,” Bieler said. “They shoot out a mucus web, just like Spiderman—although in slow motion. Then, microorganisms get stuck in the web, and the snails use their mouths to pull the web back in and strain the food through barbs on their tongues called radulae in order to eat. They filter-feed, much like baleen whales.”

While this is a new species, don’t get too excited about these sedentary web-spewing snails: cute as they may be (if you think snot webs are cute, we don’t blame you), the worm-snails are a sign that a desperate attempt to protect the world’s coral reefs may be in danger.

So far, the creatures have only ever been found on the wreck of the USNS General Hoyt S. Vandenberg, a ship deliberately sunk as part of the “Key West Ghost Fleet”. The ship, sunk in 2009, is the second-largest artificial reef in the world. It and other retired ships provide a clean surface for sponges, corals, and hydroids to grow, which in turn provide food for local fish and attract fishermen and tourists. Artificial reefs represent just one of many attempts to support natural coral populations, which are dwindling due to climate change, pollution, and interference from tourists.

Scientists hoped that loads of sea critters would make themselves at home on the rusting vessel. But Thylacodes vandyensis wasn’t on their wish list.

“We’re trying to figure out what really belongs here,” Bieler told the Miami Herald. “Are we really seeing the native butterflies returning? Or are we seeing feral cats? In the marine environment, it’s a little tough to know who are the feral cats.” Bieler, who’s familiar with the local fauna, is fairly certain that Thylacodes vandyensis isn’t a Floridian who’s gone unnoticed for the researcher’s entire career. Using DNA data banks from museum collections as a guide, Bieler and his colleagues were able to track down the worm-snail’s closest relative—and unfortunately, it hails from the Pacific ocean.

That’s not a huge surprise: other Pacific species have been seen colonizing the artificial reefs in that area. And because artificial reefs start out fresh—they don’t have any local coral or other species growing on them when they’re sunk—it’s easy for invasive species to get in on the ground floor and flourish. Live Science reports that just a handful of the snails were stuck to the ship in 2012, but the reef was flooded with thousands of them just a couple of years later. And it’s not just that worm-snails take away resources from other, native critters: they can actually reduce coral growth, and are known to occasionally carry blood flukes—parasites that attack the endangered loggerhead sea turtle.

“The artificial reefs could serve as the canary in the coal mine,” Bieler said in a statement. “If we monitor their presence on the shipwrecks, we can keep tabs on them and potentially stop them from spreading to the living reefs.”