Barnacles Destroy Boats, But Getting Rid Of Them Destroys The Sea—Until Now

“Barnacle” has become a term for something tenacious and problematic for a reason–they are determined little buggers that cause lots... 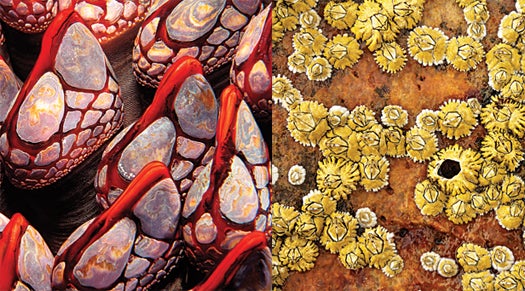 “Barnacle” has become a term for something tenacious and problematic for a reason–they are determined little buggers that cause lots of damage to marine craft. But dealing with barnacles can create even more problems than it solves.

Biofouling, which occurs when barnacles (or any other clinging species) cover a ship’s hull or anchor line. The U.S. Naval Academy estimates that biofouling creates enough hull-drag to increase the Navy’s petroleum bill by about $250 million every year. For millennia, copper has been used to keep marine life at bay; the Greeks and Romans used copper nails for this reason. The Navy uses it too, mixing powdered copper into boat paint. But as the paint wears, copper seeps into the water, where it has been shown to harm salmon and oysters. And as the paint thins, the barnacles return.

Medetomidine, a chemical that activates the octopamine receptors (similar to adrenaline receptors) in barnacle larvae, causing them to flee. Barnacle larvae are free-floating and harden only after they have attached to a surface. Researchers at the University of Gothenburg in Sweden mixed small Plexiglas capsules filled with medetomidine into boat paint, young barnacles were scared away, and the hulls remained pristine. At high levels, medetomidine can lighten the color of fish scales, making them more vulnerable to predators. But the capsules ensure that the chemical is released slowly, so it lasts longer and minimizes environmental damage.