A Glue That Seals Heart Defects

The glue—which researchers showed is able to hold fast on live beating hearts—could be a gentler alternative to stitches. 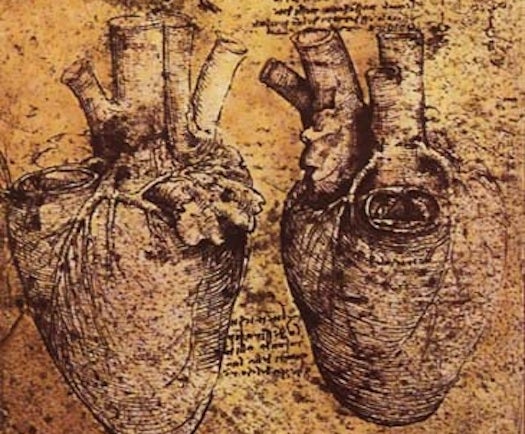 Nearly a decade ago, Jeffrey Karp was playing around with a new, biodegradable polymer he’d made. He was a post-doctoral researcher at MIT. He ended up gluing together two pieces of glass… but later forgot about it. He ultimately developed the material for something else (as a scaffold for growing artificial organs, if you’re curious).

“It’s critical in science to be focused and to advance projects with, you know, scientific rigor, so I didn’t have time to explore all of these kinds of side projects,” Karp, who’s now a researcher with Brigham and Women’s Hospital in Boston, tells Popular Science.

Then he met Pedro del Nido, a cardiac surgeon at Boston Children’s Hospital. Del Nido specializes in sealing up children’s heart defects, literally holes in the heart that shouldn’t be there. He wanted to know if Karp could make a surgical glue that would work in the heart. It was a tall order: Such a glue would have to be biodegradable, safe for use inside the body, a bit stretchy, and strong enough to hold onto a beating muscle continually awash in blood.

“We’ve always looked for a way to glue things together,” del Nido says.

Karp remembered the cell scaffolding that could glue glass together. He started with that, and from there, he worked with del Nido and a team of surgeons and engineers to develop a glue that they recently tested in hearts of living rats and pigs. The glue is made of body-friendly chemicals that cells normally produce. In the future, del Nido hopes, this could become a gentler alternative to the stitching doctors rely on for many surgeries. “All the needles and the thread, they themselves cause injury to the healthy tissue,” he says. “We’ve always have looked for a way to glue things together.”

Del Nido and Karp’s latest study took their invention to the final phase before turning it over to a commercial company, which will now finish the animal and human testing it needs before it can apply for regulatory approval. Paris-based Gecko Biomedical has licensed the technology and plans to bring it to market in Europe first, and then the U.S. soon after, Karp says.

The tests Karp and del Nido performed included closing heart defects in laboratory rats and closing cuts in the arteries of pigs. They also used the glue to attach a patch, made from another biodegradable material Karp invented, onto the thick inner wall of the still-beating hearts of four pigs. They followed the pigs for up to 24 hours. They found the patches stayed in place the entire time, even after they gave two of the pigs an injection that raised their heart rates to about 190 beats per minute, a heart rate a person might achieve when exercising vigorously, and their blood pressures to about 200 mmHg, which is a bit higher than even unhealthy human blood pressures usually reach.

“It actually works in the situation that’s as close to as what we would see in the human clinical setting as possible,” del Nido says. 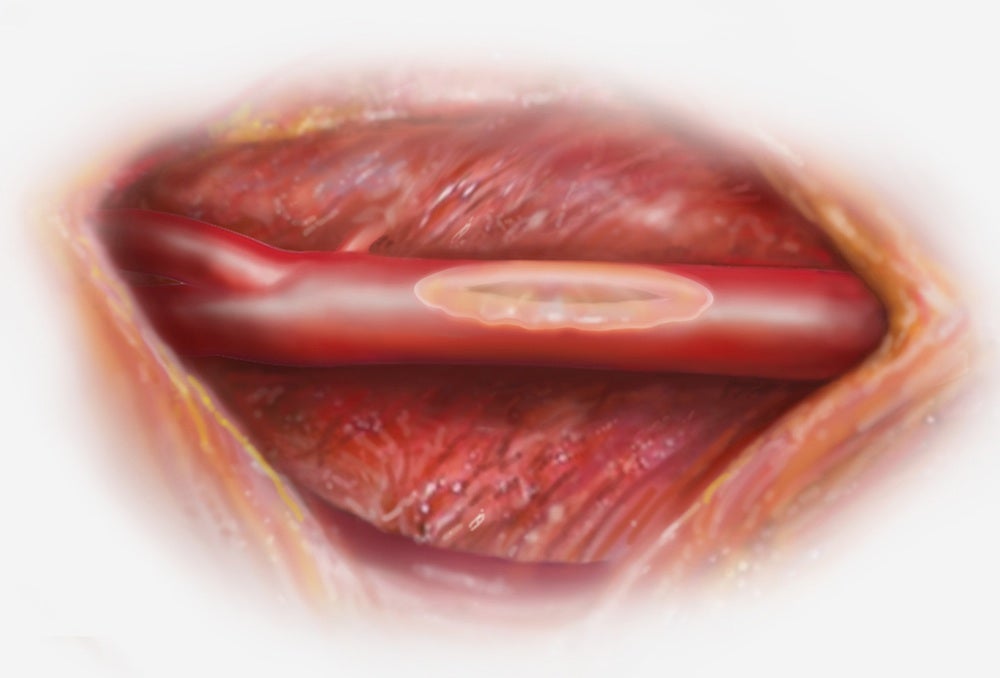 Illustration of a Blood Vessel, Sealed with the New Surgical Glue

If the new glue passes Gecko Biomedical’s further testing and makes its way into hospitals, it could be the first such glue that works under the tough conditions in the heart. There are some U.S. Food and Drug Administration-approved surgical glues in use today, but they’re either not strong enough to use on the heart, or they’re strong, but would be toxic inside the body, so they can only be used for closing cuts on the surface of the skin.

So what made Karp think of using the chemicals he did for this glue? He was inspired by spiders and insects that make secretions that stick to wet surfaces, he says. (Think: slug goo.) Those secretions, he found, are viscous and hydrophobic, or water-repelling. The new glue is the same, so it’s thick and won’t get washed away when it’s applied to an organ that’s wet from bodily fluids. Then, a five-second blast of ultraviolet light transforms the viscous gel into a solid that interlaces with the heart’s fibers and locks in place.

Karp, del Nido and their colleagues published their work today in the journal Science Translational Medicine.