Welcome back to Earth, Orion!

The Orion spacecraft just made its splashy return, after 25.5 historic days in space. 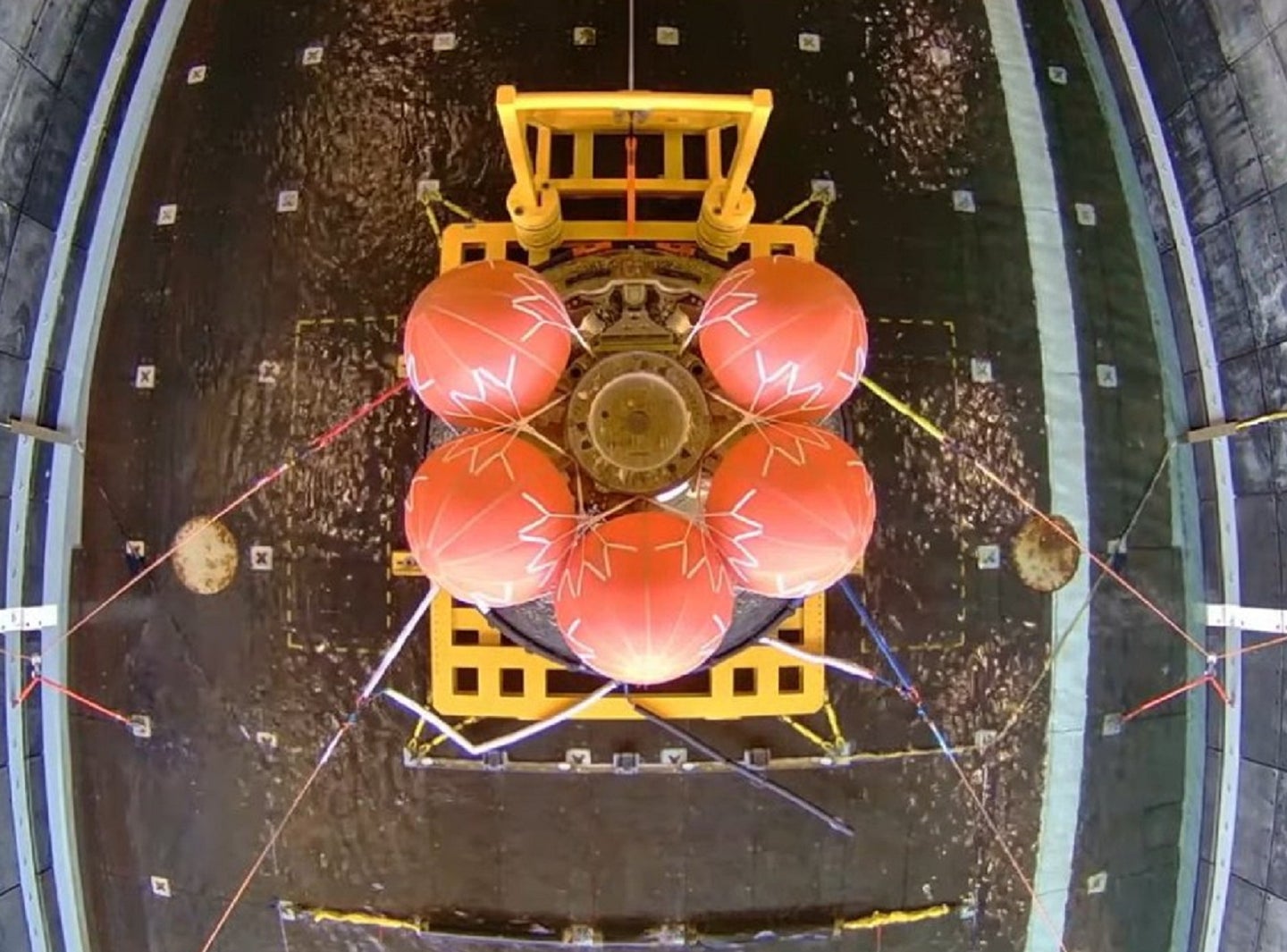 The USS Portland helped bring the Orion spacecraft to berth after it splashed down off the coast of Baja California. NASA
SHARE

Today, at 12:40 PM EST the Orion spacecraft made its grand entrance back on Earth after an unofficial time of 25 days 10 hours 54 minutes 50 seconds in space. It covered 1.4 million miles through space, orbited the moon, and collected crucial data along the way. Orion safely landed in the Pacific Ocean, off the Baja coast near Guadalupe Island, around 300 miles south of San Diego where the landing was originally planned.

Orion entered the Earth’s atmosphere traveling at about 25,000 miles per hour, before its reentry and its parachutes brought the spacecraft down to roughly 20 mph before splashdown in the Pacific Ocean.

Orion performed its crucial crew module separation at 12:00 pm EST and began the crucial entry interface stage at 12:20 pm EST. Entry interface was described as the “moment of truth,” for Orion, where the spacecraft’s important heat shield felt the effects of temperatures of 5,000 degrees Fahrenheit. Orion also experienced two expected blackout periods during entry interface when NASA lost communication with the spacecraft for a few minutes.

According to NASA aerospace engineer Koki Machin, Orion’s 11 parachutes are very similar to the ones that accompanied the Apollo missions, with the larger size of Orion’s parachutes being the primary difference. Orion’s parachutes are called hybrid parachutes and they are made of both nylon and kevlar. Kevlar is an extremely strong aramid fiber that is used to make bulletproof vests.

A recovery team comprised of NASA’s Exploration Ground Systems engineers and technicians and Navy divers and sailors from the USS Portland arrived in San Diego, California, just after Thanksgiving to rehearse recovering the space capsule.

The team practiced off the California coast by reeling in a mock capsule and loading it onto the ship. The USS Portland is an amphibious vessel and has both a flight deck and a well deck that leads to the ocean.

Since Orion doesn’t have any crew members onboard (except for its “moonikins“), the team had a roughly six hour long window to retrieve the capsule.

In a press conference on December 5, Orion Deputy Program Manager Debbie Korth said, “We’re really pushing the envelope with this spacecraft to see what we can get out of performance,” referring to longer burn times for the spacecraft’s engines (from 17 seconds to 100 seconds) and thermal response from solar arrays.

Orion will return to Kennedy Space Center later this month, where NASA will remove the vehicle’s accelerometers, mannequins, dosimeters, and microphones for further study.

The Artemis I Mission launched on November 16 and is the first integrated test of NASA’s latest deep space exploration technology: the Orion spacecraft itself, the all-powerful Space Launch System rocket, and the ground systems at Kennedy Space Center. It is the first of three missions, and will provide NASA with more critical information on non-Earth environments, the health impacts of space travel, and more for further research around the solar system. It also showcases the agency’s commitment and capability to return astronauts to the moon.

Artemis I and II will also pave the way to land the first woman and first person of color on the moon as early as 2025 as part of Artemis III. “When we talk about sustained exploration on the lunar surface and getting onto Mars, Artemis I is that step,” James Free, associate of NASA’s Exploration Systems Development, said in August. “Our next step beyond this is Artemis II, we’re putting a crew on it.”

According to NASA Administrator Bill Nelson, the ambitious goal of advancing human space travel to reach Mars will come after Artemis III. NASA hopes to establish a base on the moon and send astronauts to the Red Planet by the late 2030s or early 2040s.

“It is one that marks new technology,” Nelson said about Orion and the Artemis I mission on Sunday following the splash down, “a whole new breed to astronaut, a vision for the future that captures the DNA of particularly Americans, although we do this as an international venture, and that DNA is we are adventurers, we are explorers, we always have a frontier. And that frontier now is to continue exploring the heavens.”