Europa’s icy surface may glow in the dark

Understanding the chemical composition of ice on Jupiter’s intriguing moon could reveal hints about its habitability. 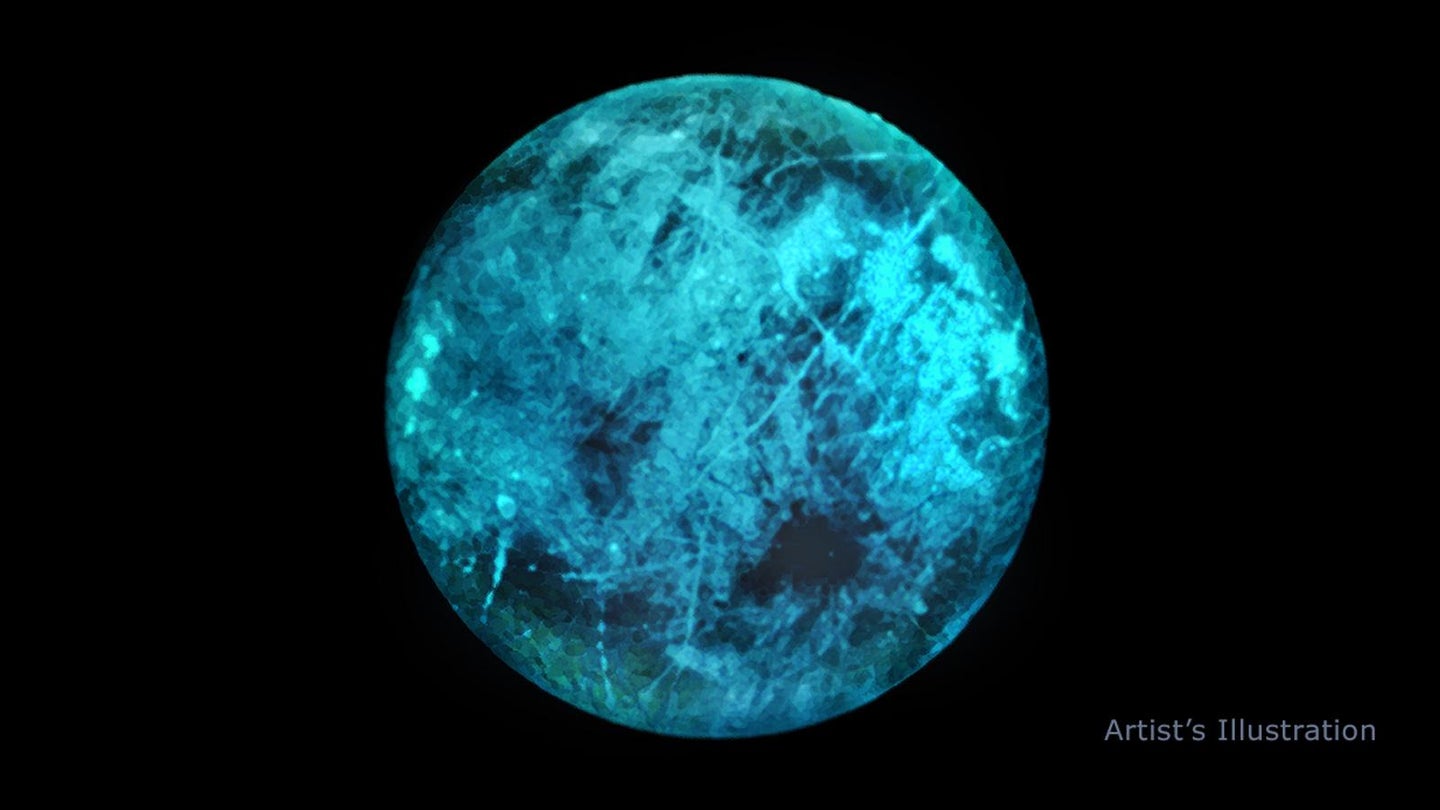 This illustration of Jupiter's moon Europa shows how the icy surface may glow on its nightside, the side facing away from the Sun. NASA/JPL-Caltech
SHARE

The night side of Jupiter’s moon Europa may glow in the dark, scientists reported this week in the journal Nature Astronomy.

When researchers fired beams of electrons at ice samples to simulate the radiation that regularly lashes Europa’s frigid surface, they noticed that the ice emitted a faint glow that varied depending on which minerals were present in the ice. NASA’s Europa Clipper probe may be able to observe this same phenomenon when it reaches the distant moon in a few years—and perhaps use it to investigate whether Europa has conditions amenable for life.

Until now, the only object in our celestial neighborhood known to emit light from its nighttime side is Earth; the electricity humans use to light our dwellings can be seen from the International Space Station, says Murthy Gudipati, a laboratory astrophysicist at the NASA Jet Propulsion Laboratory in Pasadena, California. “Because of its position and the geological aspects of Europa, it could be very similar to Earth in the sense that we have a second object in our system that also glows in the night,” says Gudipati, who published the findings on November 9.

Europa is covered by an icy crust several miles thick, which scientists believe covers a vast ocean that is 40 to 100 miles deep. The moon also receives deluges of charged particles from Jupiter’s strong magnetic field; this radiation would be lethal for a human standing on Europa’s surface. And that would only be relevant if humans were somehow able to withstand the moon’s surface temperatures of, on average, 100 Kelvin (-279.67 Farenheit). “This is a very unique place in our solar system,” Gudipati says. “It is one of the highest contenders for potential habitability [because of] these oceans and it is also very uniquely placed in one of the harshest outside environments.”

He and his colleagues wanted to understand what happens when charged particles strike Europa’s surface. They fired beams of electrons at ice cores representing different possibilities for Europa’s surface and filmed the results with a video camera. When the electrons struck pure water ice, the researchers saw, the frozen liquid gave off a whitish glow with a faint blue-green tinge. This glow was brighter when the irradiated ice contained magnesium sulfate (Epsom salt). Ice containing sodium chloride (sea salt) had a much dimmer glow without any colorful tinge. Upon further investigation, the scientists found that the light coming off the ice was predominantly white, but green wavelengths were slightly more prevalent in the light coming from the water ice, red in the Epsom salted ice, and blue-green in the sea salt ice.

This glow occurs because when electrons plow into the ice, they energize the material. The frozen water then releases some of this energy in the form of light, with different atoms and molecules giving off light at different wavelengths.

A similar process occurs in the northern lights, Gudipati says. To our eyes, the aurora has an intense green hue because the oxygen in the atmosphere has plenty of room to emit light without interacting with other materials. The composition of the luminescent ice is denser and more varied; there may be several compounds constantly emitting light that muddles together to form a mostly whitish glow.

“In the ice there is no space between one atom and the other atoms; it is like sea lions sunbathing, they cannot move around,” Gudipati says. “It is totally crowded and each of these excited atoms or molecules interacts with its surroundings.”

He and his colleagues estimate that, if Europa’s surface glows in the night like the ice in their experiment, the Europa Clipper’s planned instruments would likely be able to detect it as the spacecraft zooms past. The mission, which will launch in the mid-2020s, could give scientists an opportunity to figure out how suitable Europa might be for life by analyzing the glow coming off the night side of the moon.

As it sloshes against the seafloor, Europa’s ocean likely interacts with the rocky substrate to produce minerals that may be vital for life. Some of these minerals will eventually make their way into the ice covering Europa’s ocean. This frigid shell is scarred by relatively few craters, indicating that its surface is young. “Those impact craters are somehow cleaned up, and that cleaning up would only happen if there is an exchange between the interior and surface,” Gudipati says.

Depending on how brightly the ice glows and what wavelengths of light it emits, scientists could determine its chemical composition. “The material on the surface could bear some fingerprints from what the material was in the oceans [over] time,” Gudipati says.