Local asteroid Bennu used to be filled with tiny rivers 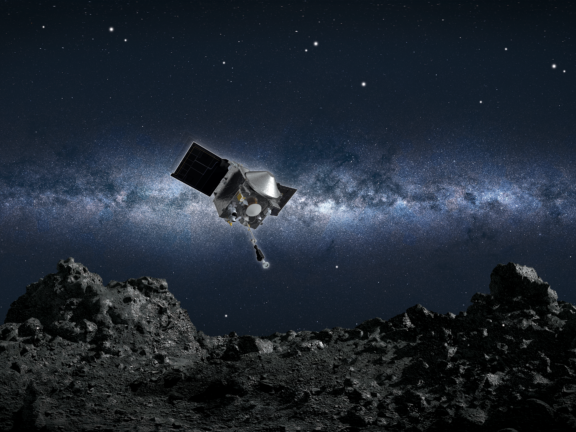 Scientists have long hungered for a better understanding of the exact chemical ingredients that presumably kicked off life on Earth. But after eons of asteroid strikes, earthquakes, and other general mayhem, it’s hard to figure out what materials covered the surface of our planet millions, much less billions, of years ago—key intel that would help uncover how life came to be.

That’s one of the reasons NASA sent a spacecraft—the Origins, Spectral Interpretation, Resource Identification, Security, Regolith Explorer (or OSIRIS-REx for short)—to the asteroid Bennu. This space rock has gone relatively untouched since the formation of the solar system, so studying it could provide a window to those early days and help us better understand the origins of life as we know it.

In late 2018, OSIRIS-REx slipped into Bennu’s orbit hundreds of millions of miles from home somewhere between Earth and Mars, and spent months taking a close up look at the object. Today, in the pages of Science and Science Advances, an army of researchers share the history of Bennu that they’ve managed to piece together so far—a story that may eventually help demystify our humble origins.

“Bennu is this object that is frozen in time and records these very early processes,” says Hannah Kaplan, a planetary scientist on the OSIRIS-REx team and coauthor of two of the six research papers published today. “One of the driving points of this mission is that these asteroids could have delivered some of the precursor organic matter that gave rise to [life on] Earth.”

While asteroids experience little of the upheaval that wipes traces of the past from planetary surfaces—such as winds, rain, and volcanism, to name a few—that doesn’t mean they’re dead-as-a-doornail rocks either. Bennu features clear signs of an active past, today’s results emphasize. Researchers will have to disentangle the various ways in which the asteroid has changed if they hope to use it as a window into the early solar system.

Kaplan and her colleagues spotted one such sign as soon as they finished surveying the asteroid as a whole and zoomed in on sites of particular interest. While snapping pictures of Bennu’s soot-dark rocks, OSIRIS-REx’s camera also picked up bright streaks and blobs embedded in the asteroid’s boulders, a few inches wide by a few feet long. “We would never have seen these things from [telescopes on] the ground,” Kaplan said. “It was a surprise that they were there, and in turn it then shifts our understanding of what happened on the asteroid.”

The team turned another instrument, OSIRIS-REx’s visible and infrared spectrometer, on the light colored “veins” to figure out what they were looking at. Spectrometers identify materials by the specific colors of light they absorb and reflect, and the spacecraft’s readings suggested that the whitish bands were made of materials called carbonates. Carbonates are often deposited by water on Earth, strongly suggesting that Bennu used to be on the soggy side.

Researchers have long known that asteroids often carry ice, and indeed OSIRIS-REx had already detected clays containing fragmented water molecules on Bennu, but the degree to which the liquid sculpts its host remains an open question. However, the new results suggest that, at the dawn of the solar system when the currently Empire-State-building-sized Bennu was part of much chunkier object perhaps 60 miles across, water flowed rather plentifully. As the ice melted, it likely seeped into surface fissures and trickled through the pre-Bennu body, dropping carbonates as it went. To create the largest veins observed, the researchers estimate that the flows likely have seeped through an area perhaps two dozen miles across.

The new picture of a broadly moist Bennu forerunner fits with studies of meteorites on Earth, where researchers had seen similar carbonate veins. But where the veins in meteorites barely show up under a microscope, OSIRIS-REx made out the asteroid’s bright splotches while orbiting from more than half a mile away. “On Bennu, we think we’re seeing something similar just at a larger scale,” Kaplan says.

While Bennu’s light spots revealed its wet past, its coal-black surface betrays a lively present. Spectroscopic observations suggest that a layer of what Kaplan calls “organic gunk” blankets the asteroid’s surface today. The messy mix of complex molecules containing carbon, sulfur, oxygen, and other elements may not look like much (Kaplan likens it to coal or a key ingredient in asphalt, chemically speaking), but many researchers believe that our extremely distant ancestors pulled themselves together out of similar ingredients on the surface of ancient Earth—ingredients perhaps delivered by asteroids like Bennu.

This organic (meaning carbon-rich) soot lies thicker in certain areas, the team found, which they interpret as evidence of relatively recent space “weathering.” Organic material is fragile, and scientists have previously caught the asteroid popping pebbles off into space, revealing its underlying material to the universe. Wayward cosmic rays and microscopic meteorites may have pummeled newly exposed sections, destroying complex molecules and contributing to their thick and thin distribution. A better understanding of these processes will help researchers get a clearer picture of how much organic material the young Earth could have received from asteroids.

And it won’t be too long before researchers will get to pour over little Bennu bits firsthand. The spacecraft is scheduled to collect as much as 2 ounces of asteroid dirt on October 20th. Mission planners intend to return the sample to Earth in September 2023, where planetary scientists will bring the full power of terrestrial research machinery to bear as they fill in even more details of Bennu’s eventful past and present.

“That will close the loop on the whole story by providing us this really intense snapshot of this one spot on the surface,” Kaplan says.