The all-civilian crew is pioneering a new type of citizen science in space. 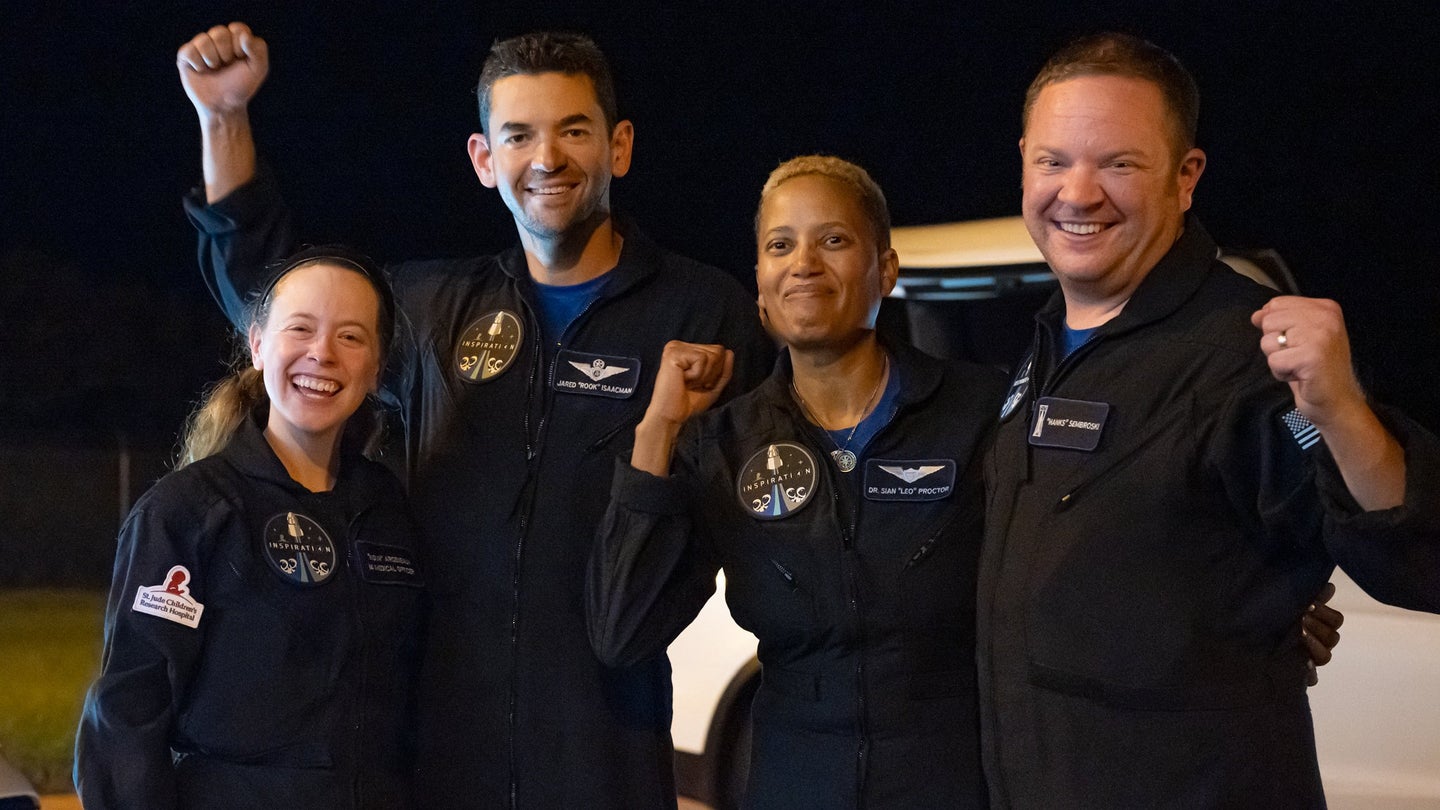 On Saturday, four explorers splashed down off the Florida coast after spending three days circling the planet. Like the crews who have orbited the Earth before them, they spent some of their time taking advantage of the rare opportunity to study how the human body—their bodies—reacted to an exotic environment featuring diminished gravity and elevated cosmic radiation.

But unlike previous orbital crews, the members of the Inspiration4 mission, operated by SpaceX, are not professional astronauts who had spent a career preparing for the experience. Rather, they belong to an emerging class of travelers, variously called spaceflight participants, space fliers, or space tourists. These adventurers are distinguished by a combination of wealth and luck.

Otherwise, however, the first private orbital crew consists of normal people, presenting researchers with a unique opportunity—and a singular challenge. For the first time, investigators had the chance to find out how everyday folks adjust to space. But to do so, they needed to design experiments that anyone could, and would want to, carry out during an out-of-this-world vacation.

“We’re looking to the future of private nonprofessional people going into space, so we have to strike that balance of the science being easy to implement, easy to execute, and low burden,” says Jimmy Wu, a biomedical engineer at the Baylor College of Medicine’s Translational Research Institute for Space Health (TRISH), which organized Inspiration4’s research activities. “It’s definitely a shift from working with professional astronauts who are paid to do that.”

A battery of tests

TRISH investigators had a host of questions they hoped Inspiration4’s crew—made up of billionaire Jared Isaacman, physician assistant Hayley Arceneaux, data engineer Chris Sembroski, and geoscientist Sian Proctor—could help answer during their time in orbit. The scientists designed a handful of research projects to answer some of the most pressing concerns.

Before and after the flight, the crew used a tablet with an accelerometer to see how well they could stay balanced. The system in the inner ear that keeps the body oriented relies on gravity, and its disruption could be linked to the bane of every space traveler: space sickness. Puzzlingly, researchers haven’t found any connection between astronauts who get car sick and those who get space sick, so TRISH scientists are casting a wider net.

“We haven’t seen any good correlation between what happens on Earth and what happens in space,” Wu says. “We just need a lot more data to understand this and connect with the general population.”

The Inspiration4 participants also used tablets to take ten tests to measure their reaction times and overall cognitive function. When astronauts have taken such tests on the International Space Station, researchers haven’t detected any mental fog. But that might be because the tests are too rough to pick up subtle dips in the already high performance of elite pilots and the like. If space travelers from more diverse backgrounds experience more significant declines, researchers would like to know.

A major challenge of spaceflight is keeping the crew healthy in the absence of hospitals and doctors. Star Trek explorers had a “tricorder” device to monitor the general status of their bodies. In a small step toward that future, the Inspiration4 crew field tested two apparatuses for studying their health in real time.

One was a handheld ultrasound machine for tracking how water moves through the body when it doesn’t have gravity dragging it downward. Technicians take ultrasounds at hospitals, but Inspiration4’s device uses artificial intelligence to watch the images and guide a novice user accordingly. “That allows for more unskilled operators to do ultrasound, rather than going through many months of training to do that,” Wu says.

The crew also took saliva and pin-prick blood samples, which another apparatus analyzed instantaneously for signs of stress, inflammation, and immunity. The members brought the samples back to Earth for preservation as the first entries in a long-term scientific endeavor: the building of a “biobank.”

These samples will remain at the Baylor College of Medicine for research into spaceflight phenomena of the body. It was only after astronauts started spending long periods of time on the space station that NASA began to document still-mysterious changes to their vision, for instance. An extensive biobank could help researchers study other still unidentified health effects, especially as a wider range of people venture into space.

“Twenty years from now it’d be nice to be able to look back” and answer the question, “‘Was this happening with the very first civilian space flights?’” Wu says.

A crash course in research

But before they could begin amassing this treasure trove of information, TRISH researchers had to design the experiments to be as simple as possible and train the space fliers to carry them out. While professional astronauts have years to prepare for a mission, the Inspiration4 crew had just a few months. And much of that time was spent learning to cope with life-or-death emergencies, such as what to do if the spacecraft’s window broke.

Professional astronauts oversee a wider range of experiments, many of which are automated, but the Inspiration4 team still had to study their intended research program. TRISH researchers taught a SpaceX employee how the experiments worked, and that employee trained the crew on site. Now that the spacecraft and its passengers have returned to Earth, TRISH, which paid an undisclosed amount of money to fly its research, waits to find out how successful its projects were.

“We did our best to get them ready and capable of doing the science, but the nature of it is they’re on their own,” Wu says.

Determining whether the experiments and training program were straightforward and effective enough will be a major research result in its own right, because Inspiration4 likely marks the beginning of a new wave of space travel.

On average, fewer than a dozen astronauts have orbited the Earth each year since the beginning of human spaceflight in 1961. SpaceX is already on track to match that number in its first year of private flights, according to Wu, and could easily exceed it if the company starts to launch missions every month or two. In the span of a few years, what has historically been a slow drip of health information could become a deluge.

And TRISH intends to record it all. The institute has already gotten in touch with specific crew members who will fly on upcoming missions, both announced and unannounced. “TRISH is being aggressive about engaging all potential missions because we don’t want to miss the opportunity to collect that data,” Wu says.