It’s tough enough keeping track of everything that might hit Earth. 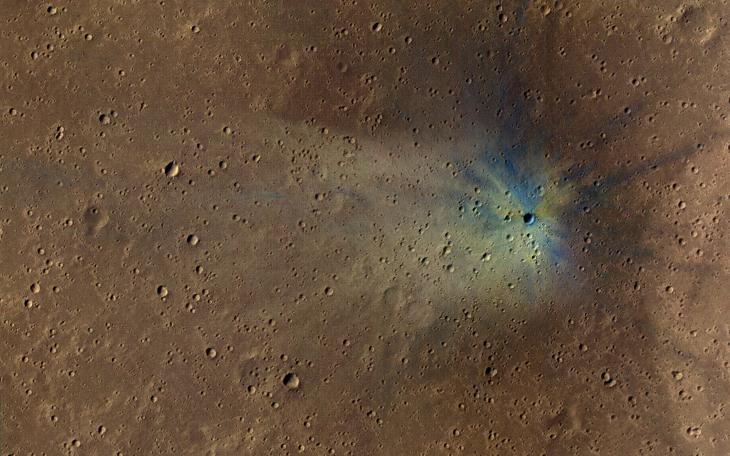 Craters on Mars suggest the planet takes quite a beating. University of Arizona/HiRISE-LPL
SHARE

In December 2018, a 33-foot-wide meteor exploded over the Bering Sea. In June 2018, a smaller meteor, about 9- to 12-feet wide, exploded over Botswana and rained meteorites onto the desert. In 2013, a 60-foot meteor exploded over Chelyabinsk, Russia, with a shockwave strong enough to destroy buildings and injure more than a thousand people. This kind of airblast only occurs about once or twice per century. Even more rarely do asteroids make it to the ground in a large enough piece to leave a crater. But it’s hard to know for sure: 90% of meteorites impact Earth’s surface in an unpopulated area, according to Lindley Johnson, NASA’s Planetary Defense Officer.

Before the century is out, humanity hopes to travel to the Moon and Mars. Those future astronauts will face many risks, like radiation poisoning, isolation, communication delays, and cramped environments closed in by hostile conditions. But if and when we become extraterrestrials, will we have to prepare for alien asteroid strikes as well?

“Impacts are a natural part of the process in space,” says Johnson. “This is a hazard throughout the solar system that we’ll have to keep in mind as we do venture out.”

We’re already well seasoned in trying to spot things that might hit our home world, though it’s far from an exact science with our current technological abilities. There are millions of asteroids orbiting the Sun, and a relative handful of these sometimes pass by Earth. If one comes within 30 million miles, it’s known as a Near-Earth Object. Any NEOs larger than about 450 feet that happen to intersect with Earth’s orbit within about 20 Earth-to-Moon distances are upgraded to Potentially Hazardous Asteroid status. A global network of scientists, using telescopes both on the ground and in space, find and monitor NEOs and PHAs, calculating their orbits one hundred years into the future. For now, there are no known objects that pose a significant impact threat to Earth in that time. But how does that equation change when we head off world?

Because the Moon is, astronomically speaking, so close to Earth, Johnson says that any asteroid classified as an NEO or PHA could also strike a lunar base. And while our atmosphere burns up most of the dust and debris the cosmos hurls our way, the Moon lacks a protective bubble of its own. In a 2016 Nature paper, scientists described more than 200 new craters spotted using NASA’s Lunar Reconnaissance Orbiter, suggesting the desolate satellite takes quite a beating.

But it’s important to consider just how small a target the Moon is—and how big space is. Our satellite is only a quarter the size of Earth, and orbits more than 200,000 miles away. In the context of our solar system, which stretches many billions of miles across, the Earth and the Moon are essentially in the same place, Johnson says. On Earth, the chances of an asteroid hitting a populated area are about 1 in a million. Those chances don’t change much when thinking about humans living in a base on the Moon.

Lunar meteorites do pose one unique challenge: Each impact sends several tons of material shooting upwards—and then raining back down to the ground. These bits of moon are called “secondaries.”

The lack of friction-y atmosphere means meteoroids can hit the moon as fast as 14 miles per second, and because of this high velocity, “a hit on the lunar surface can release one hundred times the mass of the projectile,” says Eric Christiansen, NASA’s head of Micrometeorite and Orbital Debris Protection. That material then comes screaming back to the surface at nearly the speed of a rifle bullet. The 2016 Nature paper noted 47,000 lunar “splotches” resulting from such fallout.

“They’re much slower than the meteors, but they’re still fast enough that we have to worry about them,” Christiansen says.

Then there’s the question of impacts on Mars. NASA hopes to use the moon as a proving ground for technology that’ll help us get to the Red Planet by the 2030s, and this distant world has its own set of orbit-crossing asteroids. With an atmosphere only 1% as thick as Earth’s, smaller rocks can come hurtling through.

“There is something like a new crater forming on Mars every one or two days,” says Ingrid Daubar, a planetary scientist at the Jet Propulsion Laboratory who studies impacts using the Mars Reconnaissance Orbiter. These pits can be about 13 feet across, which suggests they’re formed by objects about the size of a soccer ball.

Still, the likelihood that any one base on Mars would get hit is slim. If humans settled in an area the size of a football field, Daubar says, a soccer-ball-sized object might hit every 100 million years. If that settlement were twice as big, that likelihood might go up to once every 57 million years. A settlement the size of the New York City metro area might see such an impact every 20 years, which does start to sound a little unpleasant for our alien urbanites.

But let’s not get ahead of ourselves. Right now, there’s not much scientists can do beyond identifying and monitoring the asteroids in our vicinity. Space-based telescopes like the proposed Near Earth Object Surveillance Mission (previously named the Near-Earth Object Camera) would help scientists on Earth spot more, Johnson says, including those asteroids that cross Mars’s orbit. But that mission hasn’t yet been fully funded.

For now, understanding more immediate risks like radiation are a much higher priority for humans leaving Earth, Christian says. Asteroids won’t slow down our goals to explore the Moon and beyond. But they might make life a little more tricky once we’re up there.