The new look may be a familiar one. 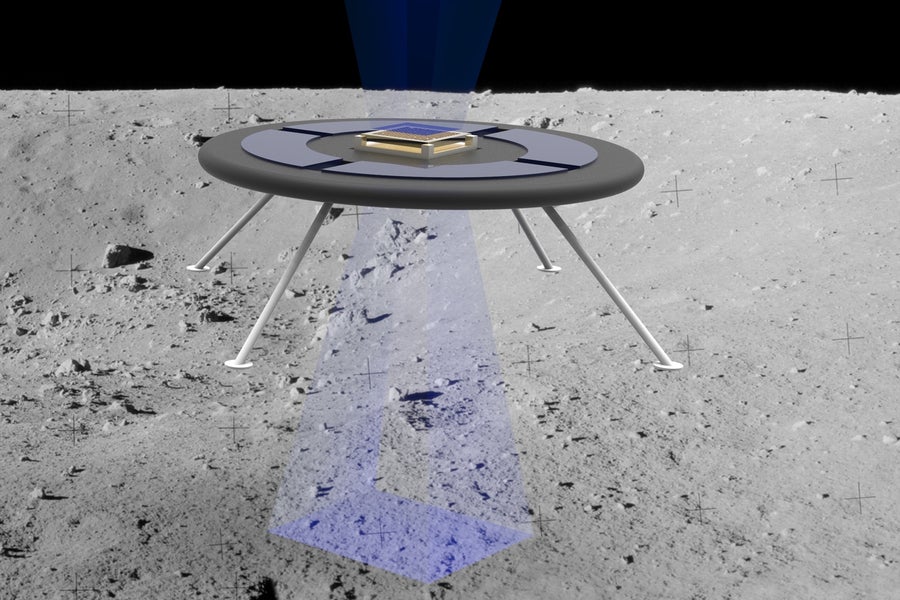 Researchers at MIT recently tested a new concept for a rover that hovers. Image courtesy of MIT
SHARE

Could the next generation of lunar rovers resemble UFOs? To some, the idea isn’t as far-fetched as it sounds.

Researchers at MIT have recently tested a new concept for a ‘hovering rover,’ a spacecraft that instead of relying on a traditional wheels-on-the-ground approach, will use the moon’s natural electric field to levitate over its surface.

Because celestial bodies like the moon and other asteroids lack atmospheres, they’re unable to deflect solar wind, and thus are able to build up electric fields through direct exposure to the sun and surrounding plasma. The resulting charge is strong enough to lift dust particles in the air, a phenomenon that most closely resembles the way static electricity might make someone’s hair stand on end.

The hovering rover works by utilizing a cheap, yet effective power source: miniature ion thrusters. Typically used to propel spacecraft through space, in this case, small ion beams are used to charge the vehicle and boost the surface’s natural charge, which creates a powerful force that repels the vehicle from the ground.

Oliver Jia-Richards, a graduate student at MIT and lead author of the paper, says that the team’s idea for the project originally stemmed from NASA’s research into dust levitation, which is the study of how static electricity and dust behave in an airless environment like the moon, and how the combination might affect mechanical and electrical systems—those that allow rovers to function. That led him to wonder if it was possible to apply the concept to space exploration and engineering.

“It’s sort of inspired by the natural processes that already happen on these asteroids,” he says. And because their rover wouldn’t come into contact with the surface, maneuvers made impossible for a wheeled rover could be attempted with success.

Although both lunar and Martian rovers typically undergo hundreds of tests meant to simulate unique situations and stressful conditions, no mission has yet to escape the inevitability of wear and tear. But MIT’s simple, disc-like design could help to extend the mission’s life, and according to Jia-Richards, could “potentially provide a much more precise and easier way of maneuvering on these rough terrain and low gravity environments.”

The researchers do have one main hurdle they want to overcome: the rover’s size. Its small stature does present some limitations on the amount of science instruments the rover could carry. But being that small has unique advantages, too.

[Related: NASA is testing space lasers to shoot data back to Earth]

“They’re small, and they are restricted in terms of the scientific instruments that they can carry. The idea is that you launch multiple of them,” says Jia-Richards. He compared them to Cubesats—small satellites that usually stay in Earth’s low orbit—and explained that while an individual hovering rover wouldn’t be more capable than a typical rover, multiple devices operating as a team could easily mimic its abilities.

There are other challenges, too. Getting a rover off the ground is a tricky task. Because Earth’s gravitational force is much higher than a hovering rover could handle, the team had to design their own conditions in which the rover could thrive.

To test their concept, the group first created a compact hexagonal test vehicle, no bigger than the palm of someone’s hand. After installing five ion thrusters (one pointed upwards, the other four pointed down), which propel the vehicle forward, the device was suspended in a vacuum chamber to simulate how the rover might fare on various planetary bodies.

Jia-Richards and his team eventually found that with enough power, a two-pound rover would be able to levitate at least a centimeter off the ground on a large asteroid like Psyche, but would need about five times more power to accomplish the same on the moon.

MIT plans to continue fine-tuning the hovering rover by testing how well it operates in different environments. If successful, Jia-Richards says that in 10 or 20 years down the road, he envisions the device as a flexible exploration tool, one that could either travel singularly, or in a small fleet.

“The final goal would probably be to have them be autonomous,” he says. And while there’s still much to do before their concept turns into a finished product, their work is already garnering professional support.

Olga Bannova, a research professor at the University of Houston, believes that robotic systems should have an ever-evolving role in support of human-led space exploration efforts. And while she’d like to see MIT conduct additional flight tests with both bigger and more powerful models , she says she’ll follow their team’s progress closely.

“I’m excited whenever somebody is pushing the boundaries,” Bannova says.” To me, it’s always worth [exploring] at least because even on the way there, maybe the end, the results won’t be exactly what is projected in the beginning, but it will trigger some other ideas.”