It’ll team up with the Parker Solar Probe after it launches in February. 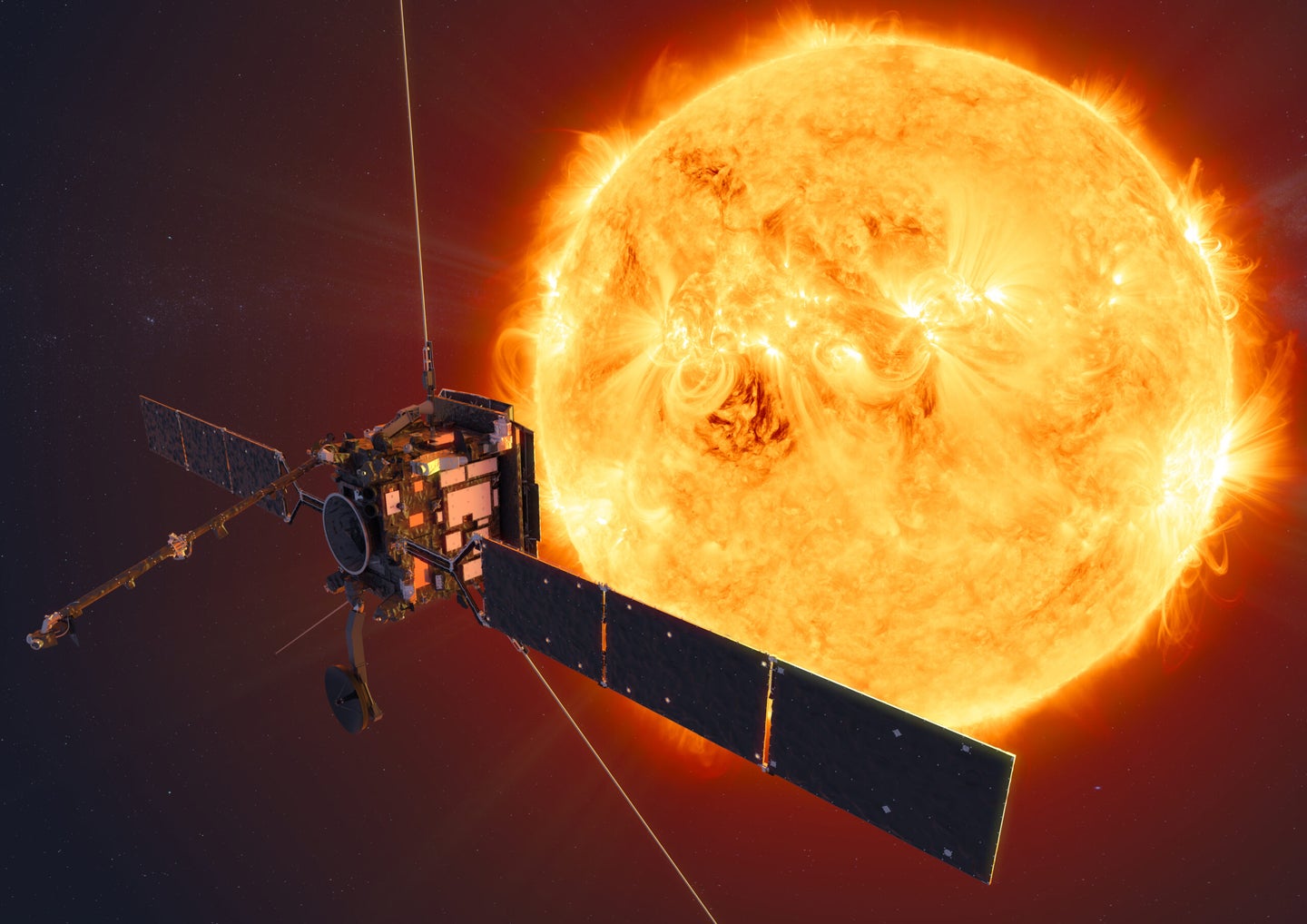 A European space probe will soon launch with the specific mission of doing exactly what every child learns never to do—stare directly at the sun.

The intensity of the sun’s light blinds most camera systems, whether they’re squishy eyes or rigid iPhones. But the newest solar satellite’s peepers aren’t most camera systems. Slated for launch in early February, the European Space Agency’s Solar Orbiter will tag team with NASA’s Parker Solar Probe to study the enigmatic solar winds and magnetic field of our nearest star. While it won’t get as scorchingly close as its partner in exploration, the Solar Orbiter will use its unique set of instruments to take unprecedented measurements of the star, including a much anticipated first glimpse of the sun’s poles—a perspective current solar observatories lack.

“[The spacecraft] do good work on their own, but when you put them together into this system observatory, they get so much more powerful,” said Nicky Fox, the director of NASA’s Heliophysics Science Division during a press conference on Monday. “We’re excited to welcome the Solar Orbiter into our fleet.”

After a few years of delays, the European Space Agency (ESA) has delivered its Solar Orbiter to Florida’s Kennedy Space Center, where NASA is preparing it for launch as soon as February 7. Once in space, it will begin preliminary data collection in May, coordinating measurements with NASA’s Parker Solar Probe as that craft makes its fifth close approach to the sun. The 1.5-billion-dollar Solar Orbiter then faces a year-long journey—swinging around the sun, Venus, and the Earth to get into position—before it begins full science operations in November of 2021.

While the orbiter has a different skillset than Parker and is headed for a different solar region, both probes represent complementary attempts to unravel the same central mystery: a churning star sits at the center of our solar system, flinging outward gusts of charged particles that mess with our communications systems, but simultaneously keep us safe from the dangerous galactic rays of interstellar space. Heliophysicists know that the sun’s ever-shifting magnetic field plays a role in pushing out those particles, but can’t yet forecast when those protective breezes will get whipped up into damaging gales.

The Solar Orbiter will study the sun with two sets of instruments. The first is a suite of four so-called “in-situ” devices stuck onto a 12-foot rod that will directly gauge the zephyrs around it as one might do with a moistened finger stuck in the air. With the exception of one novel tool that can detect traces of heavy metals in the proton- and electron-based solar wind, this suite largely duplicates the senses of Parker. That redundancy will come as a boon to researchers, who will soon be able to compare the solar wind (which streams out from the sun in every direction) at two points relatively close to the sun. That’s a far cry from the number of weather stations meteorologists use on Earth, but a big improvement over just one.

The second set of instruments will increasingly set the orbiter apart as the mission evolves over the next seven years. Unlike Parker, it packs six remote sensing instruments—telescopes that will spy on the sun’s surface in everything from x-rays to visible light.

After this new orbiter opens its eyes in 2021, it will eventually take the closest images ever of the star, from just 26 million miles away. That’s about a quarter the distance between the Earth and the Sun, and inside the orbit of Mercury. Parker has already made closer approaches, but it doesn’t carry cameras capable of staring directly at the blazing orb—it’s focused on sampling the inner winds instead. The Solar Orbiter’s sun-facing telescopes sit safely inside the spacecraft, hidden behind its heatshield. When the time comes, viewing ports will open just enough to let in the sunlight needed to take pictures.

With both sets of instruments, researchers hope the Solar Orbiter will help them trace the solar wind back to its roots on the surface of the sun. “[It will] ideally provide, for the first time, the first full observation of the solar wind, starting by identifying its sources on the sun and then measuring all its properties as it flows outside throughout the atmosphere of the sun and as it reaches and passes our spacecraft,” said Yannis Zouganelis, the ESA deputy project scientist for Solar Orbiter.

Over time, the orbiter will leverage further encounters with Venus to tip its own orbit out of the plane that Earth and the other planets inhabit around the Sun’s equator. Reaching an orbit tipped at 33 degrees—which would bring it as high as northern Africa or Dallas, Texas if it were making a similar pass around Earth—it will snap the first pictures of the sun’s northern and southern poles. Here, simulations predict that dark, gaping holes (visible in ultraviolet light) expel tremendous amounts of wind. Current images taken from orbit around the equator catch just the edges of these unseen realms, which some scientists suspect may foretell the intensity of solar activity years down the line.

The unique perspective will also help researchers get a full, three-dimensional picture of the magnetic field at the poles and elsewhere. Other observatories have been able to gauge the field strength and estimate which way it’s pointing, but trying to do so while stuck on Earth is kind of like estimating depth with one eye closed. “Our models of solar winds and coronal mass ejections, they overlap critically on getting the magnetic field correct back at the sun,” said Chris Cyr, former NASA project scientist for the mission. “We’ve been making a lot of assumptions so far and this will give us a chance to check on that.”

The solar wind mystery has stood for decades, but with Solar Orbiter and the Parker Solar Probe on the case, some answers may finally be on the horizon. “It’s kind of a golden age for solar physics,” Fox said. “We’ve had to wait a long time for the technology to be ready.”