The Amazon CEO is taking on the US space agency as his prime target. Here's the context on the dispute—and NASA's moonshot plans. 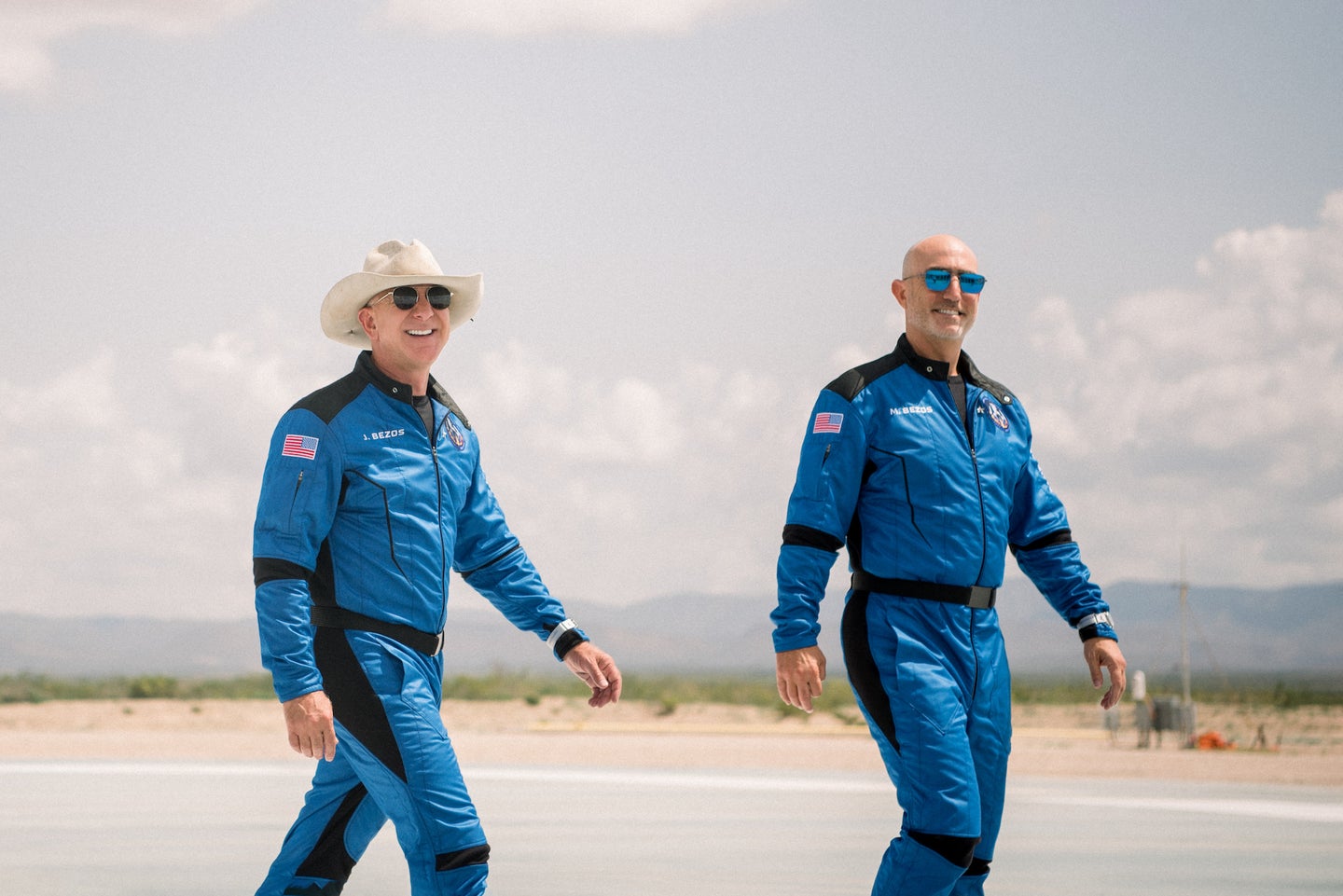 Jeff Bezos, left, is unhappy with a NASA decision regarding a contract for lunar exploration. courtesy Blue Origin
SHARE

Jeff Bezos’ space company Blue Origin has filed a lawsuit against NASA, accusing the government agency of improperly evaluating proposals. This is the latest move Bezos has made after months of criticizing NASA’s decision to pick Blue Origin’s longtime rival SpaceX as the recipient of a $2.9 billion contract to get astronauts back on the moon.

Bezos, one of the richest men in the world, penned an open letter to NASA, asking them to rethink the contract, offering to waive $2 billion dollars of costs. He also filed a complaint to the Government Accountability Office (GAO).

“I don’t know if the public is paying attention to this, but the space community sure is and the space community is reacting very negatively,” says Laura Forczyk, owner of aerospace space consulting firm Astralytical. “It’s seen as pettiness—as throwing a tantrum.”

Here’s what led to the suit in the US Court of Federal Claims.

What’s the deal with Blue Origin?

Bezos founded Blue Origin in 2000, and the company has spent years competing with SpaceX and other players in the aerospace industry for lucrative government contracts. The company’s been slowly building up their technical capabilities, with tech like reusable launch vehicle New Shepard, named for Alan Shepard, the first American to rocket into space. It’s designed to take six astronauts past the Kármán line, the internationally recognized boundary to space.

Then there’s the New Glenn, named for astronaut John Glenn, the first American astronaut to orbit Earth. It’s designed to be reused for a minimum of 25 flights, making trips to space cheaper and more accessible.

Both projects are in line with NASA’s Artemis program, whose mission is getting Americans back to the moon for longer periods of time, on rockets that can be reused. “NASA doesn’t want just the ability to land humans and come back, they want to make it repeatable and affordable,” Forczyk says, “They want to create some kind of longer term, sustainable human presence on the moon.”

[Related: The White House is giving NASA another $1.6 billion to go to the moon. It won’t be enough.]

Even though Artemis is a program that has only officially been around for about two years, the idea of returning back to the moon has existed since the first Bush administration, when it was called the Space Exploration initiative, says Forczyk. Under the second Bush administration, it was called Constellation, but the idea didn’t pick up steam until former Vice President Mike Pence gave a speech in 2019 calling for human return to the moon by 2024.

What happened with NASA?

In April 2020, three companies—Blue Origin, Dynetics, and SpaceX—were all invited to submit lunar lander designs to NASA as part of the Artemis program. The winner of the contract would get to play a hand in transporting people back to the moon for the first time in decades. According to a GAO document, NASA voiced a “preference for awarding two [contracts], pending availability of funds.”

[Related: Jeff Bezos wants to solve all our problems by shipping us to the moon]

A year later, NASA announced that only SpaceX would get the contract. “This was a surprise because everyone anticipated they would select two instead of just one,” says Forczyk.

Both Blue Origin and Dynetics filed complaints to the GAO. SpaceX’s work stopped while the GAO deliberated, but they eventually found no fault in the process, noting that NASA did not have the funding for more than one contract. Elon Musk responded to the news by tweeting “GAO” with the flexed arm emoji.

Bezos then penned an open letter to NASA chief Bill Nelson on July 26, 2021, saying that this decision to award SpaceX the only contract was “putting an end to meaningful competition for years to come.” He offered to waive payments of up to $2 billion.

NASA did not respond, and by August 16, Bezos escalated his campaign against NASA, filing a federal court complaint that cited issues in the proposal evaluation process.

And on August 19, a Washington Post reporter announced on Twitter that a NASA spokesperson said it had to pause its work on the human landing system in response to a judge’s stay.

Artemis has been plagued by many delays, and some fear this lawsuit could delay the project further.

Meanwhile, an open letter posted on the subreddit r/BlueOrigin titled “We are NOT like this,” allegedly from the perspective of Blue Origin employees, voices embarrassment at the lawsuit. A few Blue Origin staffers, like engineer Lauren Lyons, have left the company. Engineer Nitin Arora actually left Blue Origin for SpaceX.

“Looking at the bigger picture, this is just a blip,” says Forczyk. “When we bask in the glory of finally getting back [to the moon], it’ll be something long forgotten.”