This little NASA rover can conquer sand and steep hills 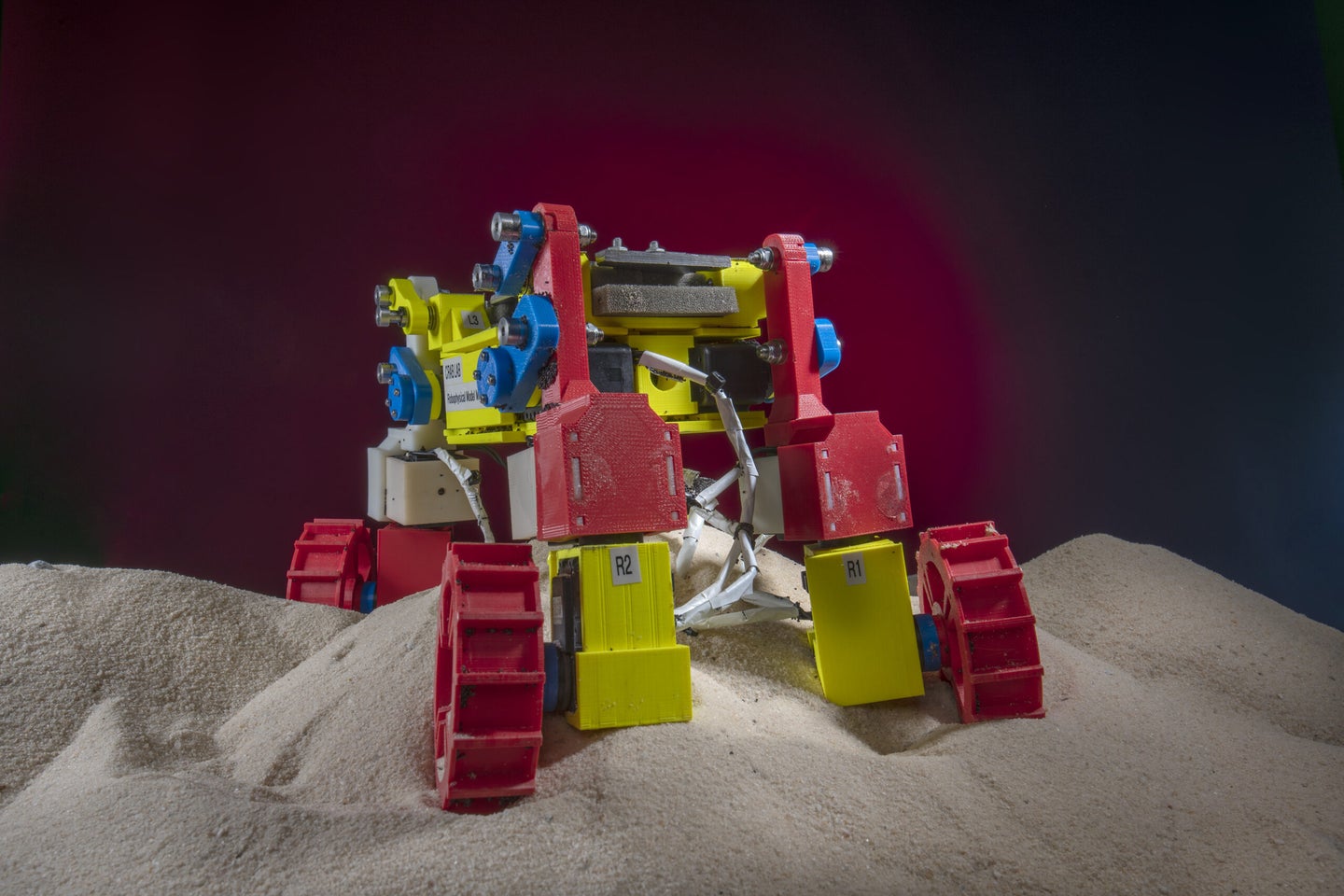 Researchers at NASA and the Georgia Institute of Technology have recently devised a way for rovers to scoot over loose soils without getting stuck and even climb up steep hills without stalling. Shrivastava et al., Sci. Robot. 5, eaba3499 (2020)
SHARE

After six years of exploring the plains of Mars, NASA’s Spirit rover was brought to a halt in May 2009 when it got stuck in soft soil near the Gusev crater. Though scientists made many attempts to free the rover, it was unable to escape and researchers terminated the mission entirely in 2011. To avoid Spirit’s fate, researchers now know that future rovers will need to be able to move about in new ways to navigate rugged terrain like the Moon’s icy poles.

Fortunately, researchers at NASA and the Georgia Institute of Technology have recently devised a way for rovers to scoot over loose soils without getting stuck and even climb up steep hills without stalling. Using a miniaturized version of a scrapped rover design, they found that a combination of walking, paddling, and wheel-spinning allowed the vehicle to crawl through beds of poppy seeds and wet sand. The team reported the findings on May 13 in the journal Science Robotics.

“The work described in the paper represents a hybrid approach to mobility,” William Bluethmann, an engineer at NASA’s Johnson Space Center in Houston and coauthor of the new paper, said in an email to Popular Science. During a mission, the rover would spend most of its time rolling about on wheels, but “during the uncommon, bad day when a rover finds itself in material where it’s too soft to rove,” the vehicle would deploy this unconventional new gait.

Much of the surface of the Moon and Mars is covered in soft, loose soil called regolith. The wheels on traditional rovers aren’t ideal for locomotion in this grainy, unstable substrate. “In a soft soil you get deeply buried and can’t climb out of your own little pit that you’ve created,” says Daniel Goldman, a physicist at Georgia Tech who also worked on the project. “Wheeled vehicles are really good on hard ground, but when you get to more complicated terrain you need more flexible and multifunctional appendages.”

When designing a prototype for the later-scrapped Resource Prospector 15 (RP15) rover, NASA researchers gave the vehicle limbs that could make lifting and sweeping motions in addition to spinning and rotating their wheels. The rover was intended to visit the lunar poles, where loose regolith, steep slopes, and shadowed craters abound.

RP15’s planned mission was canceled in 2018. However, the team went on to work on a more ambitious mission called VIPER (Volatiles Investigating Polar Exploration Rover) that could begin as early as December 2022. VIPER would explore the Moon’s south pole and gather information on the water ice that astronauts may one day extract and convert into fuel for longer space missions, like those to Mars.

To better prepare rovers for missions like these, the NASA researchers teamed up with Goldman and his colleagues, who had previously studied how lizards “swim” through desert sand. Goldman’s team then built a small-scale “Mini Rover” out of 3D printed plastic based on the RP15 prototype and tested it in beds of poppy seeds that could be tilted to different angles to mimic sand dunes. Siddharth Shrivastava, who at the time was a high school student working in Goldman’s lab, began experimenting with different possible gaits. He eventually came up with a combination of motions that allowed Mini Rover to scrabble up steep slopes without getting stuck (Shrivastava is now an undergraduate at Georgia Tech).

By using the front wheels to dislodge sand, the rover can “basically make a mess—make a puddle of granular material and swim through it,” Goldman says. “It’s essentially creating this little conveyor belt of sand from the front wheels and then letting the hind limbs paddle and thrust against it, which locally creates this bubble of granular material which the thing kind of rides up the hill on.”

The team also pulled the original, full-sized RP15 out of retirement at the Johnson Space Center. Although one of the rover’s legs was broken, the researchers did manage to put RP15 through its paces using the new roving methods on a flat bed of moist sand. “It turned out to still be able to make some progress,” Goldman says.

Last October, NASA researchers also tested a lightweight model of VIPER in a bed of material intended to simulate lunar regolith known as the “sink tank.” “The sink tank is called that because nearly everything [that] goes into it has the tendency to sink and get stuck,” said Bluethmann, who is leading the development of VIPER. “We deployed a swimming gait during the test and the rover went right through.”

If VIPER successfully paddles its way across the Moon’s south pole, the approach may allow future rovers to roam other lunar and Martian sites that have until now remained out of reach. The Mini Rover’s unique movements could also prove useful on Earth, including for military vehicles or robots that must travel through desert sand and other soft substrates (the project was partly funded by the Army Research Office). One day, the technique might even help delivery robots transport their cargo to remote dwellings, Goldman says.