SpaceX saves mannequins from fireball. Next up, astronauts. 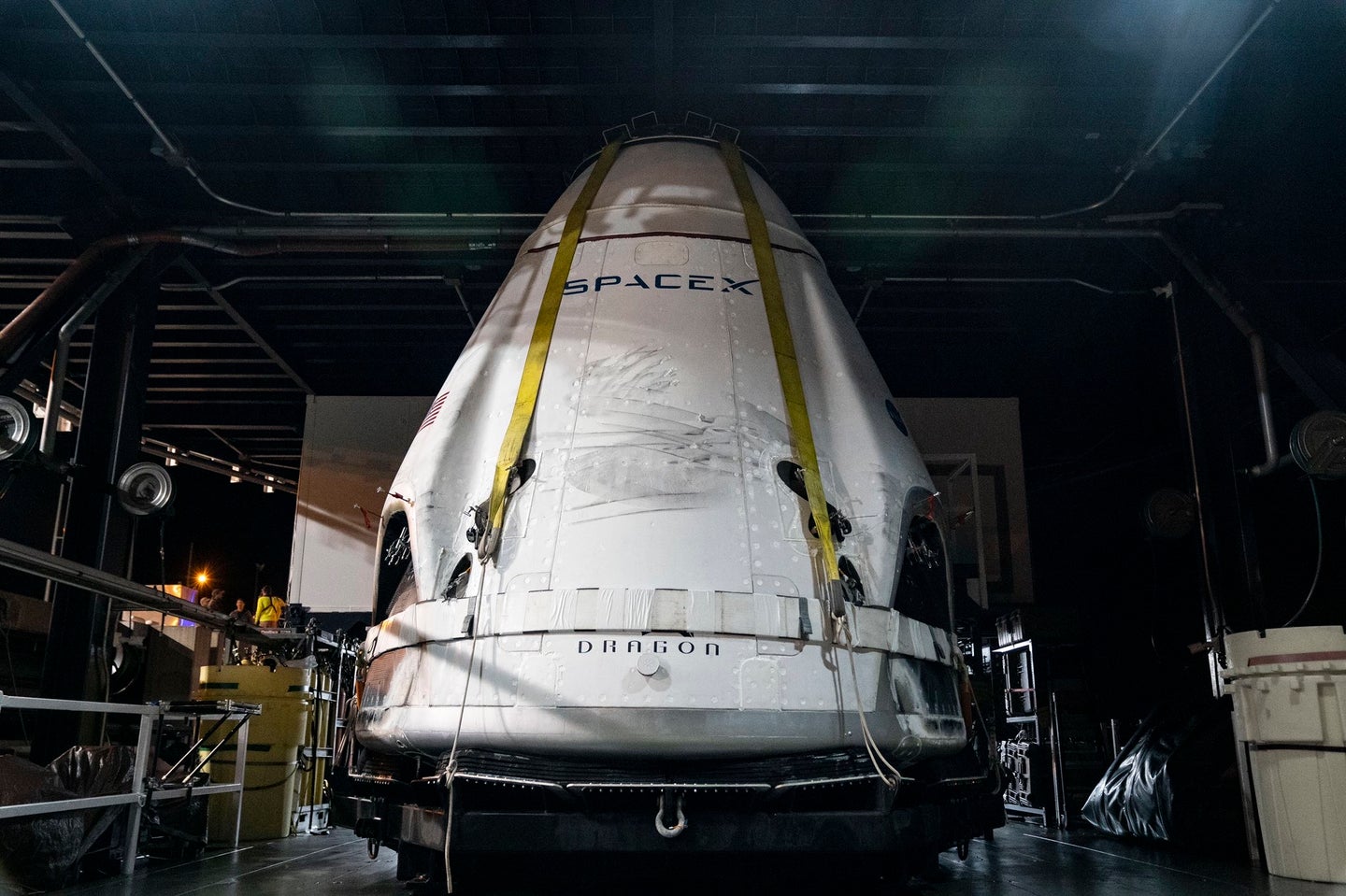 When the Falcon 9 rocket burst apart into a puff of flame and white smoke on Sunday, the Crew Dragon capsule soared unscathed above it.

The explosion would have come as a setback during normal flight operations, but for this intentional safety test, events could not have played out more smoothly. “As far as we can tell thus far, it’s a picture-perfect mission,” said Elon Musk, SpaceX’s Chief Engineer and founder, in a press release. “It went as well as one can possibly expect.” Now that the capsule has proven itself capable of handling emergencies both in the air and on the ground, SpaceX expects to launch its first astronauts in the late spring or early summer.

For this test, the rocket blasted off from NASA’s Kennedy Space Center in Florida on Sunday morning, hoisting the Crew Dragon spacecraft aloft with two mannequins inside. About a minute and a half later—while flying faster than the speed of sound—the capsule automatically separated from its booster, as it would in the unlikely case of an in-air emergency. The capsule’s eight “SuperDraco” engines fired, carrying it clear of the rocket, which exploded about ten seconds after separation. (No need to feel bad for SpaceX though, this Falcon 9 rocket had already reached space three times on previous missions—a solid chunk of its theoretical 10-flight lifespan.)

The Crew Dragon capsule coasted to an altitude of more than 100,000 feet, about three times higher than commercial airplanes fly, before plummeting back to Earth. Four parachutes slowed its decent to a comparative crawl, and nine minutes after launch it splashed down gently in the Atlantic Ocean, about 20 miles off the coast of Florida for recovery.

The in-flight abort system proved that should anything go wrong on the way to the International Space Station (ISS), the capsule will be able to bail the astronauts out—the spacecraft version of a test pilot’s ejection seat. “For this test, Falcon 9’s ascent trajectory will mimic a Crew Dragon mission to the International Space Station to best match the physical environments the rocket and spacecraft will encounter during a normal ascent,” SpaceX wrote in a pre-flight statement.

Last March the company demonstrated the Crew Dragon capsule’s ability to reach the ISS with the Crew Demo-1 mission, and planned to follow it up with an in-flight abort test over the summer. But the capsule blew up on the launchpad during a firing test of its engines in April, which pushed back the timeline. Now with the in-flight abort test complete, no major hurdles stand in the way of the long awaited Crew Demo-2 mission, which will bring veteran astronauts Doug Hurley and Bob Behnken to the ISS. Musk expects to have the capsule ready for launch by the end of March, and that it might fly—depending on NASA’s schedule—sometime between April and June. In the meantime, SpaceX plans to carry out further tests of its newest parachute design, which have suffered some recent failures.

Crew Demo-2 can’t come soon enough for NASA, which has been relying on Russia’s space agency to launch American astronauts in its Soyuz spacecraft ever since the space shuttle program ended in 2011. The space agency has funded the development of two private alternatives, SpaceX’s Crew Dragon and Boeing’s Starliner, but both timelines have slipped repeatedly. NASA once hoped to be flying astronauts again by 2015.

NASA’s final seat on Russia’s Soyuz leaves Earth in April, although the agency could potentially buy additional rides if needed. Those seats have historically cost the US about $86 million a pop, and NASA’s Office of Inspector General has calculated that seats on Boeing’s Starliner and SpaceX’s Crew Dragon will each cost roughly $90 million and $55 million respectively. Both companies say that those numbers will come down after accounting for cargo and full seven-astronaut capacity. Once the commercial crew capsules are operational, NASA and Russia will share rides without exchanging money, according to Spaceflight Now.

Spaceflight is unpredictable and no one knows for sure when each capsule will be ready, but for now NASA Administrator Jim Bridenstine expressed satisfaction with Sunday’s step forward. “This critical flight test puts us on the cusp of returning the capability to launch astronauts in American spacecraft on American rockets from American soil,” he said. “We are thrilled with the progress NASA’s Commercial Crew Program is making and look forward to the next milestone for Crew Dragon.”