No one knows the best way to stop a drone

Is there a way to knock drones out of the sky that’s just as cheap as the drone itself? 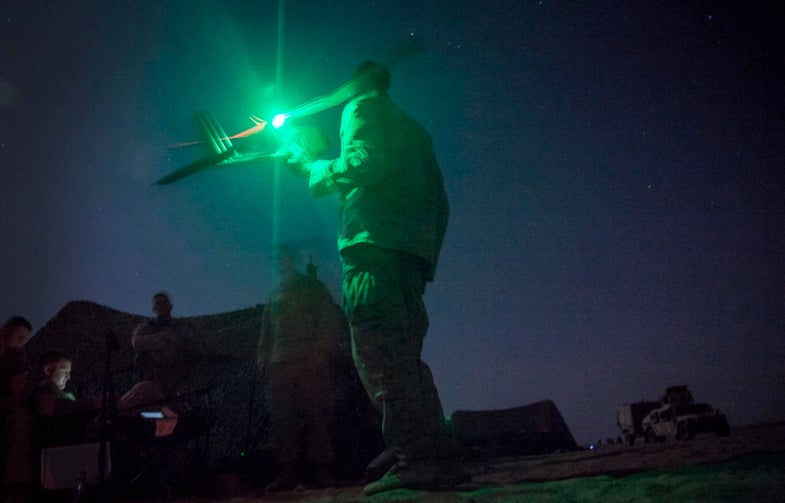 This year, the world saw a long-theorized weapon in action: a commercial drone, like a person might find at Best Buy, dropping a bomb on a target in Iraq. These drone bombers, used by the ultra-violent quasi-state ISIS in Iraq and Syria, are the flashiest combination of modern technologies with the modern battlefield. Cheap, camera-carrying robots, put to nefarious ends by a group that could never otherwise dream of fielding an air force. Dropping grenades isn’t the deadliest thing an insurgent group can do with a small flying robot, but it leads to a very important question: What, exactly, is the answer to such a drone?

There is—and this is rare for the defense world—no clear answer yet. The answer to a tank is a guided missile, fired by shoulder-launcher, helicopter, or low-flying attack plane. The answer to a machine gun nest is a tank, supported by infantry, or a mortar battery firing from over the hill. But a drone? The burgeoning world of drone countermeasures is a primordial soup of possible weapons that may someday be what clears the sky of lying robots. It’s a young industry, defined as much by outlandish promise and novel ideas as it is by useful tools.

Here is just a short sample of the more out-there anti-drone tools: net guns, drones carrying nets, squads of drones with nets, drones with net guns, and a smart anti-drone bazooka that fires, you guessed it, a net at a drone (we liked that last one). There was a vaporware drone concept that ensnared the propellers of other drones with wire. A Russian firm floated the concept of a microwave gun, to fry the electronics of hostile drones. And most famously, there are the Dutch police eagles, trained to snag a drone from the sky.

Part of the problem for law enforcement, the Pentagon, and other entities trying to protect against drones is that they’re cheap. Workable quadcopters cost as little as a couple hundred dollars. Is there a way to knock drones out of the sky that’s just as cheap as the drone itself?

Depending on the circumstance, yes. A shotgun can technically knock a drone out of the sky, provided the drone is within range and the person firing the shotgun is ready for the legal consequences that come with discharging a firearm at a robot. And, on a practice range, enough machine guns can take down a drone that’s playing at being a clay pigeon, though this isn’t really a practical suggestion for anywhere outside of a special, machine gun friendly shooting range. Bullets and shotgun shells are cheaper than drones, but the target they’re aiming at is small, the ammunition will ultimately have to hit something else, and both police and military planners are looking at other ways to disable the flying robots.

One such option is lasers. Laser weapons are expensive to develop, but once built and set up on, say, a ship, the cost of each shot is miniscule. This was the logic behind the Laser Weapon System (or LaWs) mounted on the USS Ponce, which the Navy demonstrated in the Persian Gulf against a target drone in 2014. There are a lot of laser weapons in the works, from the likes of defense giants Boeing and Lockheed-Martin, with the U.S. Army, Air Force, Navy, and Marine Corps all aiming to have a working weapon available by the next decade. Besides the United States, researchers in Israel, the United Kingdom, and Germany are all developing laser weapons to melt holes in hostile drones and other flying threats.

One thing that makes commercial drones and toy drones so cheap is that they operate on the unrestricted part of the electromagnetic spectrum. The same radio waves that make wifi work allow drones to communicate with smartphone apps or handheld controllers. That opens another avenue to counter drones: simply make it so the drone can’t communicate with its controller.

If the drone’s wifi is unlocked, a simple code sent at it will turn the drone off, crashing it to the ground. That was the approach of the Army Cyber Institute, which built a “cyber rifle” as a demonstration, and then later trained West Point cadets to use it against a drone in a simulated raid. Rather than exploiting a known vulnerability, other anti-drone weapons, like the DroneDefender from Battelle Memorial Institute, simply jam the drone’s radio and GPS signals, overpowering them and causing the drone to crash. The DroneDefender is apparently useful enough that it’s been spotted with American forces fighting in Iraq, and it’s inspired imitators in Iran and elsewhere.

Lugging a special, bullet-free rifle isn’t for everyone, and while it may be a good tool for protecting a squad on patrol, it doesn’t scale up well to protecting an entire facility. Multiple European defense contractors have put forth concepts and plans for big, elaborate anti-drone systems that track drones and then jam them or take them over. There’s the Falcon Shield, from Italy, which relies on an elaborate network of cameras before somehow taking over the controls of the drone. Airbus has an anti-drone system that tracks and jams or spoofs the GPS of incoming unmanned aerial vehicles, redirecting the robots to somewhere they’re less of a threat, and a British company put together an anti-drone system that combines cameras, jamming, and radar to find and identify its threats.

A new system competing in this space is MESMER, by Virginia-based Department13. MESMER debuted last month in a segment on drone countermeasures on the Today Show. According to Department13 CEO Jonathan Hunter, it’s “a non-kinetic means of taking commercial drones and controlling, truly controlling the airspace.” Which is to say: if it works as designed and tested, MESMER can stop drones without crashing them or shooting them.

Hunter’s explanation for how his company built their anti-drone weapon goes back to an earlier threat, another piece of cheap technology engineered to deadly effect. Hunter is a former U.S. Army Explosive Ordnance Disposal officer, which meant his job was dismantling explosives in war zones. Insurgency in Iraq and Afghanistan was defined by IEDs, or improvised explosive devices, some of which were set off by radio controls as simple as a garage door opener.

To block those radio signals, the U.S. Army spent $17 billion on jammers, with mixed results. Department 13’s approach, which led them to MESMER, wasn’t to jam the radio signals, but instead find out everything about the radio sending the signals and then send a more sophisticated signal to override it instead.

What if the drone signal is encrypted?

“Most people don’t implement encryption well,” says Hunter, after noting that MESMER doesn’t decrypt encryption. It can do a password search if need be, but mostly the software is looking to find pathways into the drone’s controls that don’t require breaking through any secure channels.

I should note, at this point, that Popular Science hasn’t witnessed MESMER in demonstration yet. There is footage of it on the today show and in an explainer video at Department13’s site, and Hunter says they’ve demonstrated the technology for a long list of potential customers, including the Department of Defense and the Australian Defense Forces. And, perhaps most confusingly, MESMER is both a system-in-a-box and a kind of software than customers will ultimately work into their existing networks of sensors and jammers.

“We also like to think of it as software, but in order to sell software you have to have hardware, so what we do is build a reference platform,” says Hunter. “We’ve found most people have a hard time wrapping their heads around it. People want to buy a black box, so here’s a black box.”

If it works in the field as well as it does in closed demonstrations, MESMER could hit at cheap drone through the very thing that makes them useful and affordable: the basic, open radio channels from the unregulated part of the electromagnetic spectrum. The danger of using a remotely controlled device is that the same pathway to control is open to other users. In an anti-drone field teeming with nets, lasers, and powerful jammers, MESMER hopes to simply sneak in through the same open door as the pilot.

MESMER is just one possibility in a vast and diverse field of anti-drone tools, and even settled counter-weapons took years or decades to develop. Machine guns reigned supreme on battlefields until years of work led to driving bulletproof armored boxes right at them; what we now know as tanks were once a narrow solution to a specific, muddy problem. Will nets, so effective at catching quadcopters in demonstrations, rise to the challenge of stopping drones on a battlefield? Could major investment in lasers, long promised as an antidote to cheap airborne projectiles and machines, ultimately lead to a future of drone-melting weaponry? Could human-carried jammer rifles win the day, a new tool in a familiar package and form factor for a new threat?

In Iraq, ISIS learned how to build its own drones, as well as adapt commercial models to meet its battlefield and propaganda needs. Whatever countermeasure ends up in the field, it’s likely only a matter of time before a solution is engineered around that, too.