Lockheed Laser Destroys A Truck From A Mile Away

Lasers versus trucks: The future of war is a Transformers movie 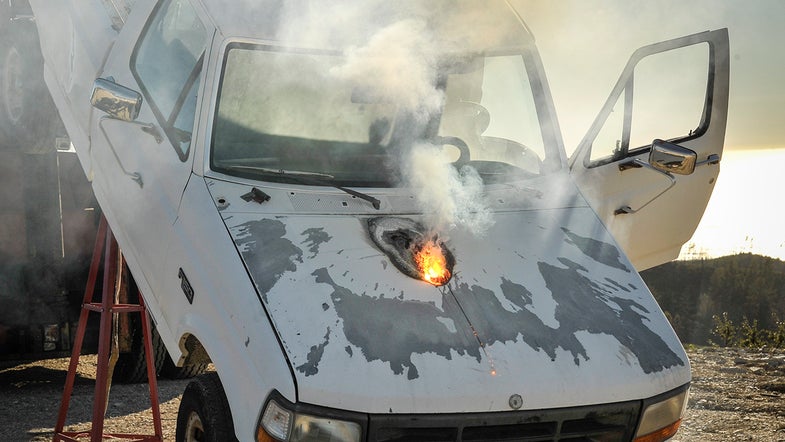 We are undeniably living in the future. Today, the evidence is this glowing-red hole burnt straight through a truck’s engine by a high-powered laser at a distance of one mile Released this week, the above photo shows just what Lockheed Martin’s newest directed energy weapon can do.

Lockheed’s acronym for the weapon is ATHENA, for Advanced Test High ENergy Asset. While it’s named after the Greek goddess of wisdom, Ares would be a more appropriate name, as it’s an explicit weapon of war. (Weirdly, Ares is instead the name of a cancelled NASA vehicle system). From a mile away, ATHENA burned through the engine of a truck in under a minute. The truck was mounted on a platform with the engine running, to simulate real conditions.

Real in every detail, because trucks, with weapons mounted in the back, are an increasingly common part of war. Known as “technicals,” they’re used by militias the world over, are popular with ISIS, and Sudan’s state-owned Military Industry Corporation even specifically produces them.

Lasers, in turn, have a particular niche appeal for the militaries of technologically advanced countries. While expensive to develop, lasers are very cost-effective to use, with each laser shot drastically cheaper than missiles and sometimes even cheaper than bullets. In the future, as the United States finds itself at war against foes fighting in pickup trucks, expect to see lasers used, not just in demonstrations, but in real war.