ISIS is dropping bombs with drones in Iraq 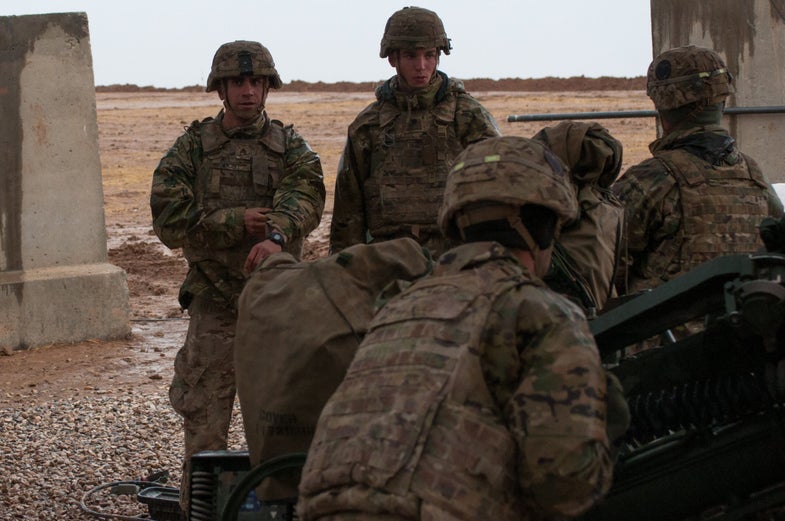 The latest bomber to make its debut over Iraq has four engines, no cockpit, and a flight time limited by the length of its battery. ISIS, the radical insurgent group holding territory in both Syria and Iraq, is fighting for its life in Mosul, the large city in Northern Iraq it has held since 2014. Most of the weapons ISIS uses are are familiar, if still horrific: rifles and mortars, artillery and suicidal car bombs. To that arsenal, ISIS recently added commercial drones, converted into tiny bombers.

Nice shot of the improvised release mechanism ISIL is using to drop grenades from commercial off the shelf UAVs https://t.co/Lj8Ltx0arQ/ pic.twitter.com/KCuzhUbndb

“It’s not as if it is a large, armed UAV [unmanned aerial vehicle] that is dropping munitions from the wings—but literally, a very small quadcopter that drops a small munition in a somewhat imprecise manner,” [Col. Brett] Sylvia, commander of an American military advising mission in Iraq, told Military Times. “They are very short-range, targeting those front-line troops from the Iraqis.”

Because the drones used are commercial models, it likely means that anti-drone weapons already on hand with the American advisors are sufficient to stop them. The Battelle Drone Defender, spotted in Iraq last summer, is a gun-shaped jamming tool that can send some models of drone crashing to the ground. It’s part of a growing field of anti-drone countermeasures, many of which focus on radio-frequency jamming to disable the flying machines.

It’s worth noting that the bomb-dropping drones are just a small part of how ISIS uses the cheap, unmanned flying machines. Other applications include scouts and explosive decoys, as well as one-use weapons. ISIS is also likely not the first group to figure out how to drop grenades from small drones; it’s a growing field of research and development among many violent, nonstate actors and insurgent groups. Despite the relative novelty, it’s also likely not the deadliest thing insurgents can do with drones.

A small drone can only, at the most, carry a few pounds of explosive. A car, rigged into a suicidal vehicle-borne improvised explosive device, can carry thousands of pounds of bombs, and a human flying a drone overhead can guide that car bomb to where it will do the most harm.