Meet drone dueling, the sport California is about to inadvertently kill 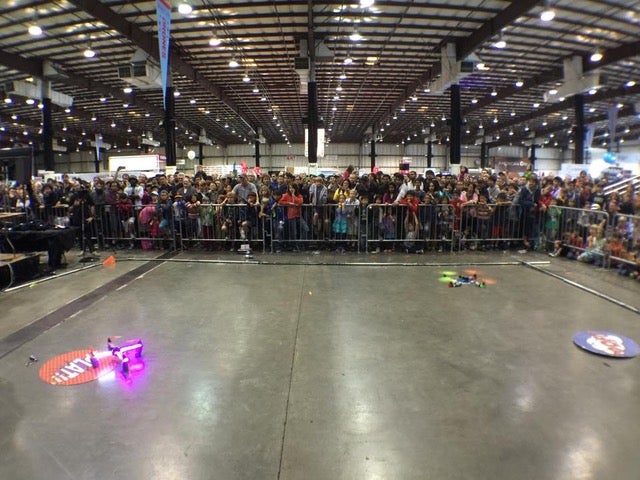 Within this cube of netting, the drones will engage in fierce combat. Image courtesy of the Aerial Sports League
SHARE

Is it possible to kill an entire category of sports before the world really knows about? A new bill, set to regulate drones in the state of California, contains a single vague line that could shut down an entire world of drone sports.

Drone combat, originally done under the moniker “Game of Drones,” is like a flying version of BattleBots, with human pilots steering unmanned machines into combat against each other, with the last machine still flying declared the winner.

“What we found is that drone violence is actually a way to trick kids into their interest in the science and tech,” says Marque Cornblatt, CEO of the Aerial Sports League. “When you smash these toys together, you’re forced to learn about all kinds of things: electronics, hardware, little bit of software, teamwork. Kids embrace the challenges and the disciplines at the heart of making a drone fly and keeping it up in the air.”

The Aerial Sports League runs drone events, including racing and drone combat, in the Bay Area, and has since its founding in 2011. They do teach-ins and demonstrations as corporate events, and, within the last 18 months, Cornblatt says they have had a total of almost 600,000 spectators to their live competitions. The League is a mainstay at Maker Faire, the tech-savvy DIY event and showcase.

For the drone duels, battles take place inside a cube of netting, up to 30 feet long on each side, so that the spectators can watch without any risk to themselves. Audience reaction to the duels led Cornblatt to consider drones as a tool for STEM education.

Working with organizations like the YMCA of the East Bay, the Aerial Sports League teach classes to kids where they learn to assemble and even battle the drones.

“When you set drones down in front of those kids and say, ‘If you learn our lesson, you’ll be flying drones here today,’ they’re super enthusiastic, extremely well behaved,” says Cornblatt.

While the classes are often small affairs, with 10 to 12 students, the spectacle of drone battles draws crowds, looking for an aerial update on the familiar BattleBots or Robot Wars premise. And drones are calibrated to the constraints of the arena. Before each event, the Aerial Sports League sets guidelines, and then there’s a check-in at the event to make sure the weapon is calibrated so that it won’t cause harm.

“We don’t allow things like chemicals, fire, or electrical discharges. We don’t allow projectiles that can work their way through the net, so you can’t shoot paintball or airsoft guns or anything like that,” says Cornblatt. “But you can do like a net launcher, which is quite popular. You can have sort of ropes dangling below the drone, or objects sticking out to probe at the other drone with like a long stick.”

The goal is a sport that lets engineering shine, where the only harm comes to the robots doing the actual fighting. When a robot goes down, the engineering can take center stage.

“We set things up so that after a drone crashes, the game doesn’t immediately end. The pilot has 90 seconds to run out there, fix the damage, and get it back in the air,” says Cornblatt. “Pilots run out into the field with all these tools and they shred these drones apart and put the drones back together in kind of like a fury of engineering and building. We found that the engineering is equally as compelling as the combat.”

The experience is like watching a NASCAR pit crew, only for brand-new machines. And like how car races turned from an in-person spectacle to an ESPN mainstay, Cornblatt and the Aerial Sports League are looking at a television show to, well, showcase drone sports. Cornblatt is in talks with one network, and they’re looking at flying within a sturdier arena surrounded by bulletproof plexiglass. With that, the sport could evolve beyond nets and sticks to other weaponry, while still maintaining safety for the pilots and any live audiences.

We don’t yet know the shape drone sports will take. Like with early automobiles, drone racing is already a league sport, one that may see innovation for decades to come. Yet cars didn’t just stop at racing; “demolition derby” entered the english language in the 1950s, and there are reports of earlier, demolition-themed races before that. There are safety considerations involved, and since derby cars require human drivers, there’s a limit to exactly how a car can destroy another. Drones, with the pilots safely removed from the vehicles and directing combat through netting, don’t carry the same risk, which lets engineers try out some more creative combat techniques.

That is, provided California law doesn’t preclude it first. The language in this new bill is similar to that contained in earlier California bills that attempted to regulate drones in the Golden State. Last year, in a letter to state Senator Jackson, Cornblatt wrote “As currently written, the bill neither defines ‘weaponize’ or provide exceptions for hobbyist combat drones that pose no threat to person or property outside a gaming context.” Jackson is the author of SB-347, which was scheduled for a hearing yesterday, before the author canceled the hearing. The language of SB-347 still fails to account for the idea of drone sporting competitions. Reached for this story, Senator Jackson was unable to comment.

“When it comes to both combat as well as the educational aspects of what we’re going, the notion that we would somehow become criminalized for these activities, it just seems ludicrous. We’ve been doing this for years, no one’s ever gotten seriously hurt,” says Cornblatt. “And to me that comes out that all this drone violence is actually quite safe.”