Meanwhile, a Marine shoots down a drone with a sniper rifle 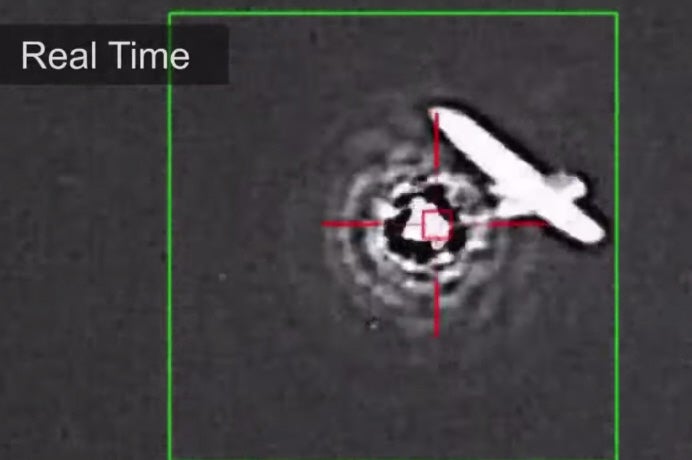 What’s the best way to shoot down a drone? For many in the defense industry, the solution to flying robots is as futuristic as the threat itself: lasers. Yesterday Boeing released video of its “Compact Laser Weapons System” destroying a drone. Like other directed energy weapons, the laser focuses light to burn a hole through its target. Here, watch it burn through the tail of a drone at “a tactical range”:

The laser focuses on the tail of the drone, which is a good way to disable it. A laser gun has to keep the beam on the target for long enough to burn through something crucial. Better targeting and more powerful beams both improve a laser’s ability to destroy a drone. In Boeing’s test, it took 15 seconds to destroy the target. That’s pretty good for a laser, and if the object in question doesn’t realize it’s burning, it might not notice until it’s destroyed by the invisible and silent laser. (The lasers are so quiet Boeing’s had to add “Star Wars” sound effects so the people firing the lasers notice when they’re shooting.)

Boeing’s previously tested a version of their laser on the back of a truck. A successful compact laser weapon that can go on vehicles could protect the Army and Marines on the ground from attacks by small drones.

But lasers aren’t the only way to shoot down drones. On Twitter I speculated that World War II style anti-air flak cannons might be useful against drone swarms (they almost certainly would be) but other low-tech options exist. Last year, machine gun enthusiasts in Arizona tested their weapons against target drones, with some success.

In late July and early August, the Pentagon conducted an anti-drone exercise titled Black Dart in California. While much of what was learned during the exercise remains under wraps, the military did reveal a few unique drone kills. In one, a helicopter shot down a target using its machine gun. In another, a Marine sniper riding inside a helicopter shot down a 7-foot wingspan drone with a sniper rifle. While the Pentagon waits to destroy drones with the weapons of the future, it looks like the weapons of the present are doing just fine.

Watch a video of Boeing’s laser below: