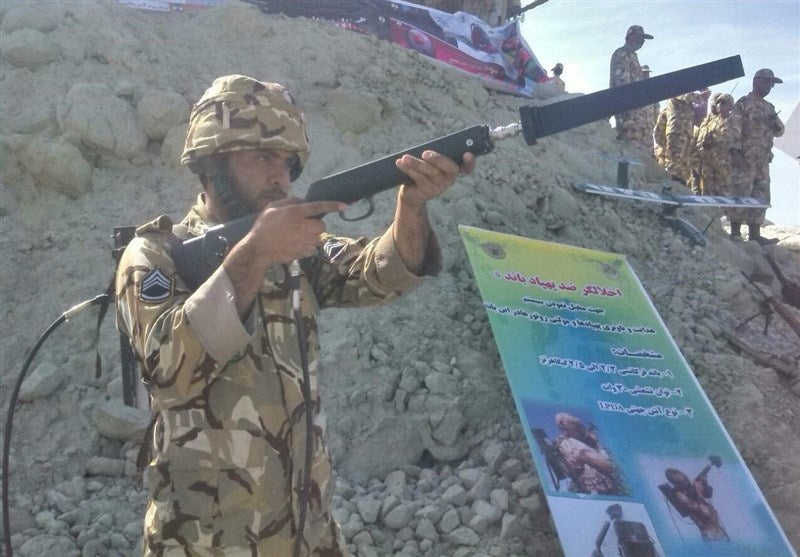 It looks like it's a gun but really it's an antenna that makes drones crash. Tasnim News Agency
SHARE

Antennas are the latest weapon in the war on drones. Small, unmanned flying robots can scout the locations of troops, help artillery commanders aim attacks, and sometimes even carry explosives themselves.

To catch drones, police and militaries are experimenting with everything from eagles to lasers. Yet in battlefields like northern Iraq, the answer is neither avian capture nor directed light: it’s radio frequencies generated by antennas and pointed at the drones. The latest is an Iranian design:

Spotted by Conflict News contributor Derek Bisaccio, this anti-drone rifle comes to us from Tasnim News, an Iranian media service. The anti-drone rifle was unveiled during a military exercise by Iran’s army. Tasnim describes it as “a drone jammer, a portable electronic device used for deflecting the hostile flying objects.”

According to the brief description provided by Tasnim, the drone jammer can lock onto an enemy drone, and then “disrupt its operation or even hack the aircraft and force it to land safely.” More pictures of the weapon are available at a Tasnim gallery.

While we don’t know more about this particularly anti-drone antenna/rifle yet, we’ve seen other similar designs. The Battelle Memorial Institute built an anti-drone antenna that mounts to a rifle, and called it the “DroneDefender.” A more recent version of that weapon was spotted deployed in Iraq earlier this year. In November, drone jamming company Drone Shield unveiled the DroneGun, a similar antenna-rifle with a backpack power supply. The whole effect looked a little bit Ghostbusters in appearance.

Rather than jamming a drone, the Army Cyber Institute at West Point built an antenna-and-computer rifle that fed information into an open channel of an unlocked Parrot drone. This allowed the cyber rifle to send an override code to the Parrot drone, crashing it, without violating FCC and FAA rules on jammers. At a training exercise this summer, West Point cadets encountered a drone on a simulated raid, and had to use the cyber-rifle to knock it out of the sky. The consequence, for a team that failed to plan around the drone, was an artillery strike that took out the entire machine gun section of the platoon.

The United States has no monopoly on anti-drone technology. As insurgents turn drones into bombs, and conventional military forces plan to outfit every squads with its own flying scout, anti-drone weapons may become as common on the battlefields of the 21st century as anti-tank weapons were in the 20th.