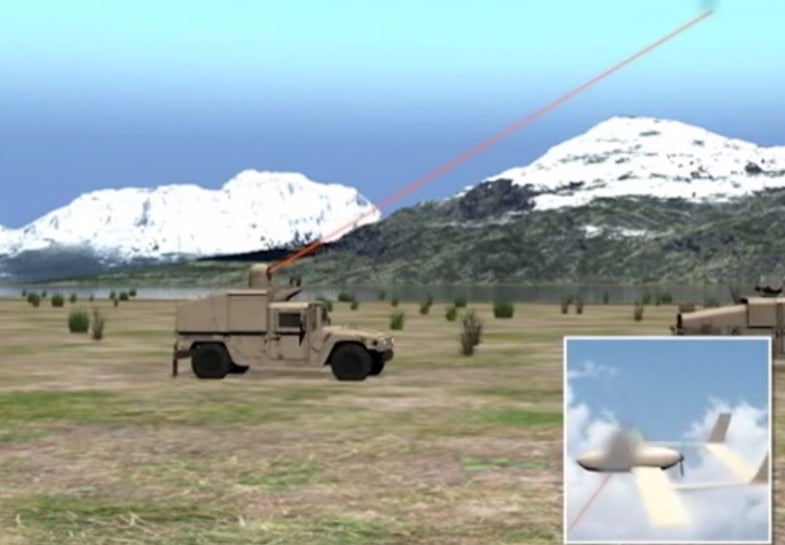 The Navy is building a system of trucks that will fight drones with lasers, and they’re advertising them with all the thrill and excitement of a second-quarter earnings report. The “Ground-Based Air Defense Directed Energy On-the-Move” weapons program, or GBAD for short, puts a laser on the back of a Humvee (or other light vehicle) and puts sensors on a couple of other Humvees. Why is the sea-focused Navy looking for a ground-based laser? The Office of Naval Research also directs the research of weapon systems for the Marine Corps, who tend to do most of their fighting on land. With GBAD, when Marines drive into the battlefield, they can shoot down any cheap and hostile drones that may try to attack them.

On Tuesday, the Office of Naval Research released a new video about the GBAD system:

GBAD has been in the works for quite some time and is based on one of the more promising aspects of military lasers: While expensive to build, they are in theory much cheaper to use than other anti-air weapons. Lasers are especially cheaper than anti-air missiles, but they’re also cost-competitive in comparison to heavy machine gun anti-air turrets.

Already, a ship-board directed energy weapon has burned holes into target drones. Modern warships come with tremendous power on board, and the Navy’s futuristic Zumwalt Destroyer is expected to have 58 megawatts of power available for such weapons.

Moving ground systems are trickier, because the power requirement for lasers is so intense. The laser on the USS Ponce is 30 kilowatts, but the Navy plans on ship-borne lasers as powerful as 100 to 150 kilowatts. For tests in December 2013, the U.S. Army’s HEL-MD laser system used a truck a lot larger than a Humvee, and it only carried a 10-kilowatt weapon.

According to the video from ONR, their Humvee-mounted system will use the same type of 30-kilowatt laser mounted on the Ponce. To support that, there will be two other nearby vehicles. One of those vehicles will have a 360-degree radar to detect targets, and the other will have a laser command center, so that even as the autonomous targeting software of the laser selects targets, there is always a human in charge of the process.

The Navy plans a “completely stationary end-to-end engagement” for the end of this year, which likely means a parked truck hitting a target with the laser. In fiscal year 2016, the Office of Naval Research plans to “demonstrate an at-the-halt single engagement, with mobile cueing / tracking.” That’s finding and hitting multiple targets while on the move. In 2017, the goal is to show that system can fight drones, move, and fight off another drone attack. If the system works as planned, future Marines will be able to shoot down enemy scout drones quickly, blinding the robot eyes of whoever wishes them harm.