Report: Iran built a guided missile in a drone’s body for rebels in Yemen

Linking these machines is a complicated proxy war, an Iranian drone design, and a production batch of gyroscopes. 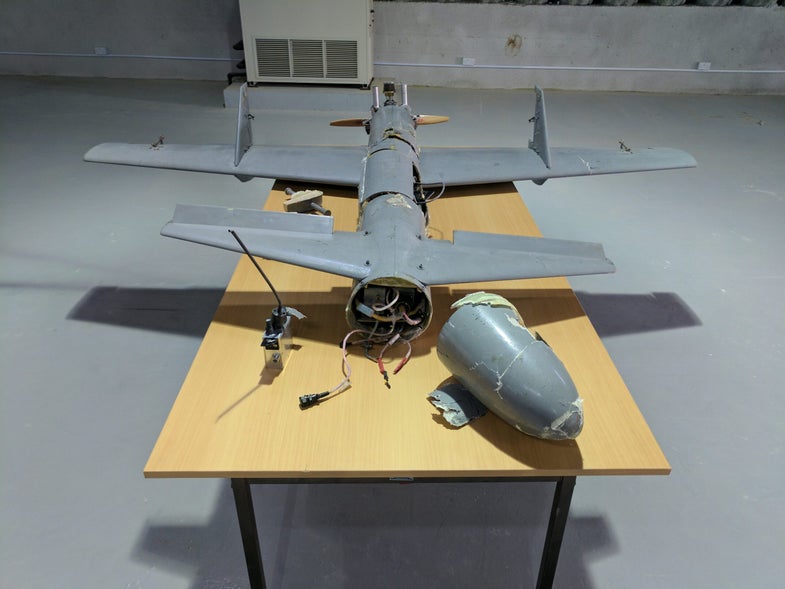 Last week, Conflict Armament Research published an investigation into Iranian technology transfers to Yemen. The investigation links a drone captured in northern Iraq, a drone-like body that crashed near Aden International Airport in Yemen, and an intercepted shipment full of drone-like parts, all curiously missing surveillance equipment. What is a drone without a camera? A weapon.

The drones, all Qasef-1 models, appear to be one-use weapons, made to attack missile defense systems. Researchers with CAR examined drone parts seized by UAE forces, and in their report argue convincingly that the drones are not just a modification of an Iranian design, but were made by Iran. And, matching reports that these drone bodies were filled with explosives and launched like missiles at radars, the drone parts the researchers examined lacked any sort of camera or surveillance hardware.

To explain how this came to be, first we need to take a moment to examine the war currently going on in Yemen. In 2015, Saudi Arabia joined Yemen’s civil war, turning a conflict between Yemen’s former president Saleh and his Houthi allies against Yemen’s internationally recognized president Hadi into a broader war. The conflict is complex, and the scale of the tragedy immense, with infrastructure destroyed and the civilian population suffering both famine and aerial bombardment.

“The way our organization works broadly is that we partner with national security forces in order to gain access to material that they are seizing from non-state or terrorist groups,,” says Tim Michetti, a technical advisor with Conflict Armament Research. “We document it, we take forensic-level digital photographs, identify the system, then trace its history of possession through multiple means, cross reference it with things we’re seeing in other places.”

In question was the specific nature of the Qasef-1 drone, which the Houthis claimed as an indigenous design. As soon as the Qasef-1 appeared, observers noted how similar it appeared to Iran’s Ababil 2 drone. Suspicions alone aren’t enough to prove Iranian involvement, but it was a place to start, and if the connection was there, then Yemen’s civil war wasn’t just a fight between factions within the country, one of which had an outside backer. Instead, it would make Yemen’s civil war like many in history, a proxy war between other nations in the region that are arming and supplying different factions. Forces from the United Arab Emirates, who seized the drone parts, are fighting as part of the Saudi-led coalition backing president Hadi. While Iranian involvement on behalf of Saleh and the Houthis was long-suspected, little evidence before the seizure of these drones linked the two.

“There was this narrative in the news about the Houthis being supported by Iran. However, the only airquotes “evidence” on offer were claims and statements by Hadi government officials, who is far from an unbiased source, and then there were other western experts that were essentially quoting each other,” says Michetti, “But there was not actual evidence available, so I went to the Emiratis and said, hey, this is what my organization actually does, can you show us what you’ve taken out of country, we can help to draw some linkages if any linkages existed.”

This is where the gyroscopes come in. Michetti pointed me to a table in the published report.

Part numbers, the boring business of making and tracking pieces of machines, reveal a lot of information to researchers willing to track down the supply chains. Previously, Conflict Armament Research looked at the supply chains for ISIS’s drone parts in Iraq, and to estimate just how many bombs and mortar rounds ISIS manufactured in Mosul. So the recovered Qasef-1 drones had the same gyroscope, in the same batch series, as a surveillance drone used by Iranian-backed forces fighting in Iraq.

At this point, it’s a bit misleading to refer to the Qasef-1 like any other surveillance drone.

“We found it interesting that there was no surveillance equipment on these,” says Michetti. “Through multiple different sources, we determined they were used in this specific type of attack to disable missile defense systems.”

Military drones, as we generally know them, are unmanned aerial vehicles controlled by a human operator, and used as a flying camera, sometimes with weapons attached. While Ababil 2 drones built for surveillance can land with either a parachute or by skidding on their bellies, the researchers examining the seized Qasef-1s found no landing gear, and no explosives inside. Still, they found components for arming and initiating explosives. With that, and without surveillance equipment, it’s more likely that the Qasef-1s are disposable strike munitions, a fancy way of saying “one-use flying bombs.”

Crashing a drone into the radar that guides a missile battery is a pretty good way to knock out the defensive missiles, and with the missiles visible on satellite footage, it’s possible to just program in the GPS coordinates of the radar into Qasef’s guidance system. That makes the Qasef-1 a simpler alternative to other anti-missile kamikaze drones, like Israel’s Harop loitering munition. Without missile defenses in the way, cruise missiles can strike with impunity. A kamikaze drone just the first part of a complex attack.

The United States Air Force, together with DARPA, is developing its own cheap drones to pull off this kind of attack, which was previously solely the domain of nations. Anti-missile missiles, like the Patriot missiles built by the United States and used by Saudi Arabia, aren’t cheap, with each running about $3 million apiece, making them something of a mismatch for inexpensive drones.

“This is a growing thing, the application of drones used by non-state groups used for offensive purposes,” says Michetti. For about a century of aviation, military aircraft were mostly limited to nations with the resources to develop, fly, and maintain attackers. With cheap modern drones, and drone bodies converted to weapons, that is no longer necessarily the case.