Drones, lasers, and tanks: China shows off its latest weapons

A peek at the arsenal at an arms fair in Dubai. 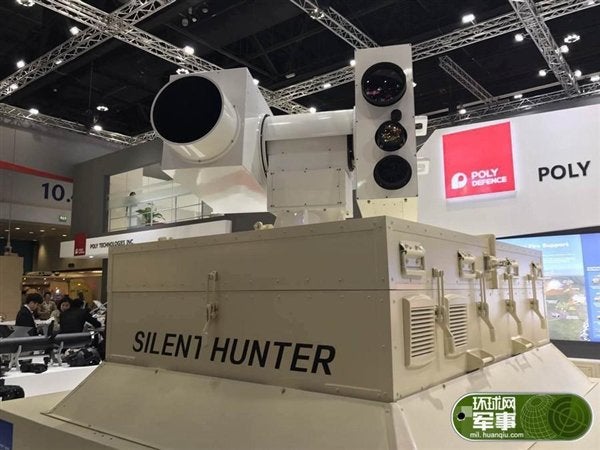 The Silent Hunter laser is powerful enough to cut through light vehicle armor at up to a kilometer away, making you wonder if China already has more powerful laser weapons only for domestic use. Huanqiu
SHARE 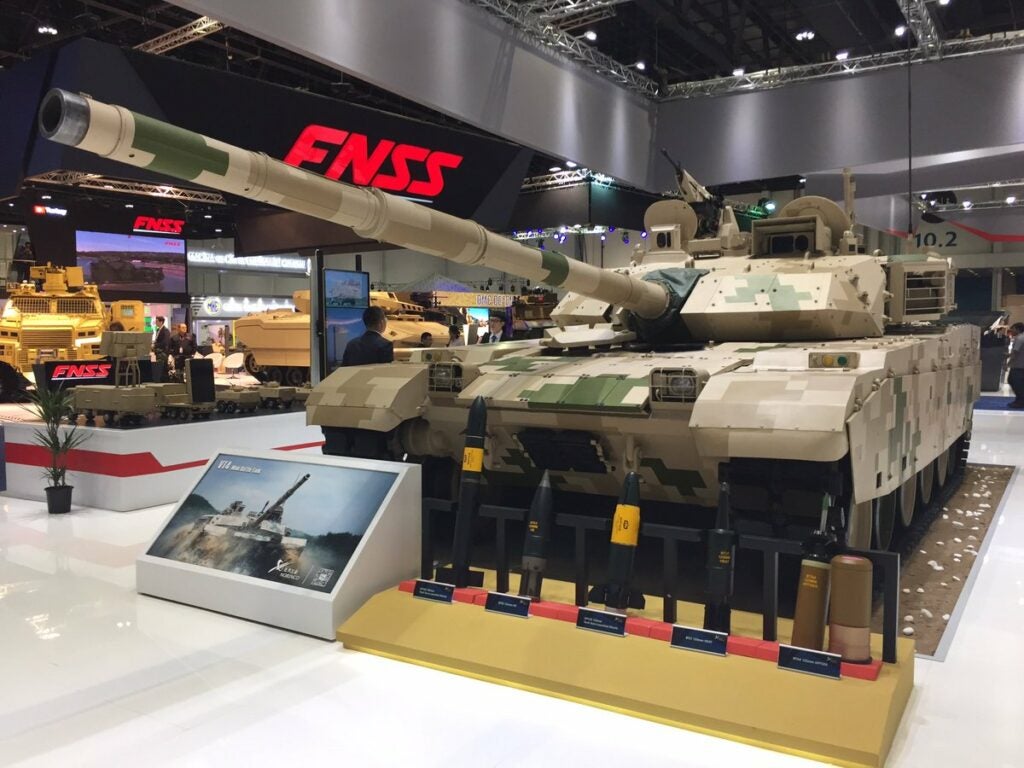 The VT-4 tank is the most high-tech tank offered by China. It boasts increased balancing armor, firepower, protection, and sensors.

At the International Defense Exhibition and Conference, one of the world’s largest arms fairs, weapons-makers from around the world show off their latest. At this year’s show in Dubai, China flaunted a range of high-tech weaponry spread across over 16,000 square feet of floor space. Included: S-20 attack submarines, FC-31 stealth fighter jets, and updates to laser and drone weaponry.

The Silent Hunter laser is powerful enough to cut through light vehicle armor at up to a kilometer away, making you wonder if China already has more powerful laser weapons only for domestic use.

Let’s start with lasers. Poly Technologies showed off The Silent Hunter, one of the world’s most powerful laser weapons. It claims an output of at least 50-70 kilowatts, which would make it more powerful than the 33-kilowatt laser weapon systems (LaWS) currently deployed on the USS Ponce. The laser is probably based on a smaller anti-drone laser, the Low Altitude Guard. That’s enough to knock out automobiles by burning out their engines from over a mile away, as the 30-kilowatt Lockheed Martin ATHENA laser demonstrated in 2015. The Silent Hunter uses fibre optic lasers (fibre optics doped with rare earth minerals), which provide weight savings over chemical lasers through increasing optical gain by kilometers of coiled fibre optics (as opposed to bulky chemical lasers). The Silent Hunter is likely to be scaled up and equipped with radars to complement its optical/infrared tracking system, making it a capable close range defense system against enemy missiles, artillery, drones and aircraft. 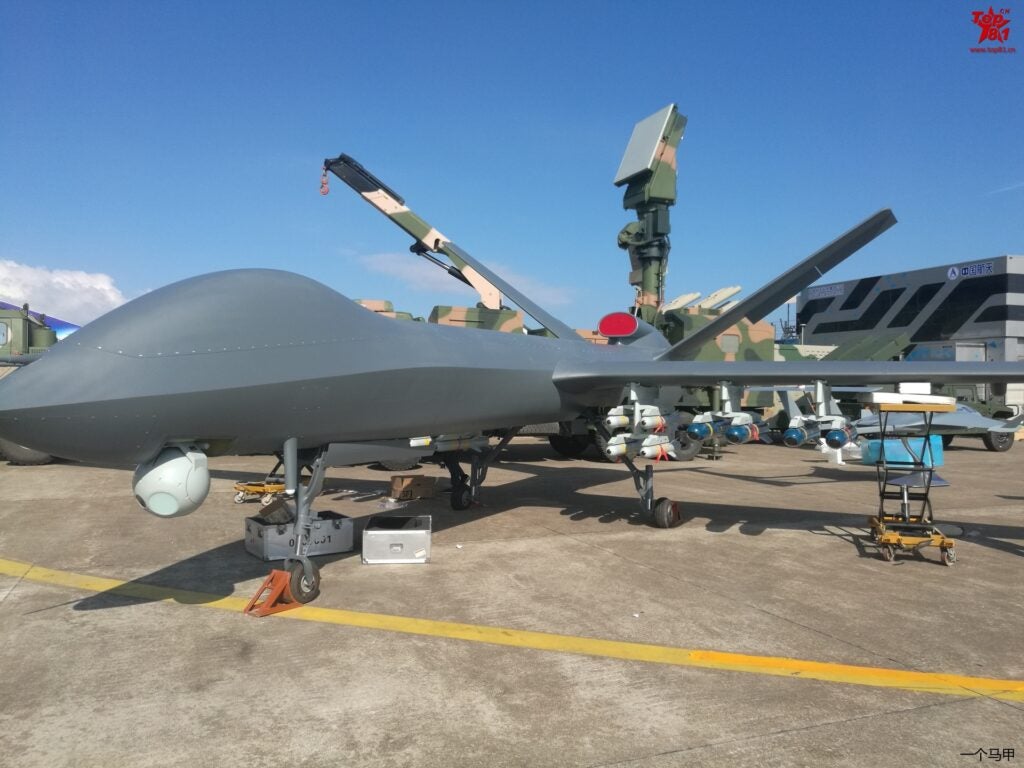 The CH-5 has a flight time of 60 hours and 6,500 km range, which is greater than some reported figures for the MQ-9 Repear. Its massive weapons load out, along with electronic warfare, multi-sensor surveillance and communications has reportedly landed big export orders at Zhuhai 2016.

The CH-5 drone is China’s largest UCAV offered for export, with a fuel-efficient turboprop engine that gives it a 4,400-mile range and 60 hour flight time (soon to become 12,000 miles and 120 hours of flight). In addition to carrying one ton of weapons, its communications systems allows its controller to use the plane as a relay station for controlling other drones. It could also benefit from breakthroughs in Chinese AI to work as part of an autonomous drone swarm in the future.

In the robotics category, there was also a tracked unmanned ground vehicle armed with a forward firing machine gun. Weighing between 50 and 100 pounds, it could be carried by platoon level units for patrol and breaching duties. 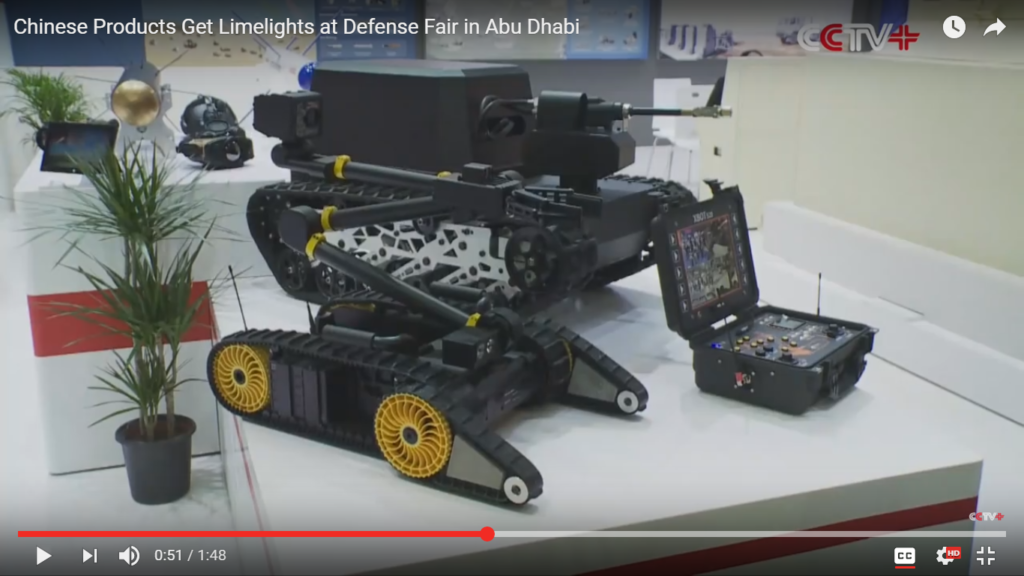 The tracked robot in the background is a remotely armed robot with a machine gun, along with an active suspension system for traversing urban obstacles.

Conventional ground vehicles were also on display for sale. The 52-ton VT-4 tank is already an export success, with the sale of a battalion to Thailand. The VT-4 is a scaled-down version of the heavy ZTZ-99A tank, and can fire 125mm armor-piercing and guided munitions. Additionally, the VT-4 can reportedly be fitted with an active protection system (APS) to physically destroy enemy missiles targeting the tank. The PLZ-52 self-propelled howitzer has the ability to shoot an extended-range 155mm shell to a range of 62 miles, along with more conventional munitions to a maximum range of 32 to 37 miles. Given that the PLZ-52’s predecessor, the PLZ-45, found fans in Kuwait, Morocco, and Saudi Arabia, the PLZ-05 is likely to be popular in foreign markets. 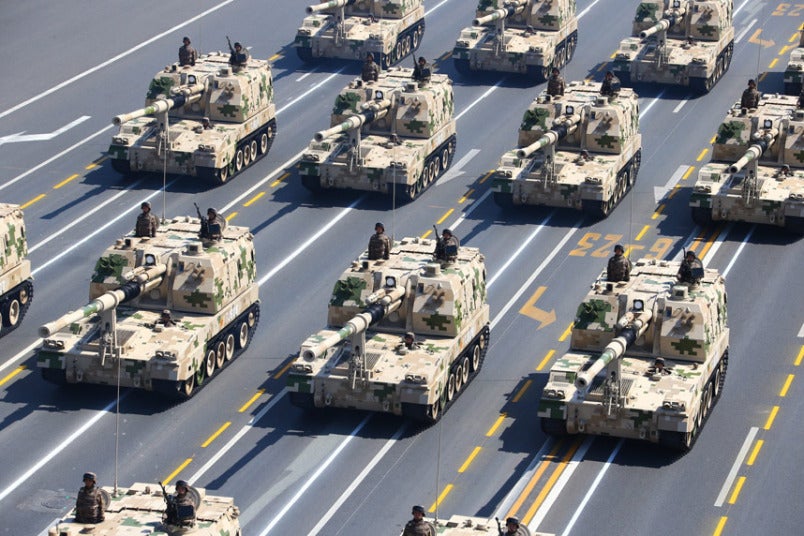 The 155mm PLZ-04 self propelled howitzer, seen here in desert camouflage, can fire boosted ammunition with a 100km range.

The International Institute for Strategic Studies (IISS) recently came out with report that China is “near parity” with western nations in terms of indigenous defense technology. As we can see from IDEX 2017, that is playing out in fields that range from tanks to lasers. And as the Chinese defense industry innovates more, it will likely grab an even bigger share of international arms sales.