Net-wielding robots for our cyberpunk now 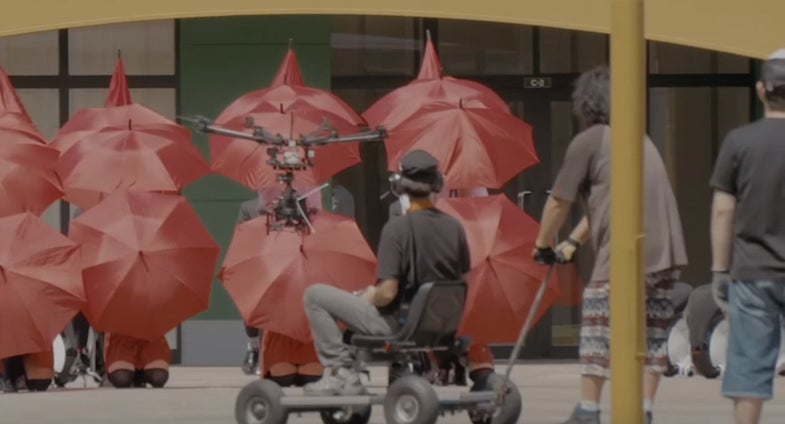 These days, stopping a bad guy with a drone sometimes takes a good guy with a drone. In Tokyo, the good guys with drones are a newly formed Metropolitan Police Department squad, designed to enforce no-fly-zones and then catch those who violate them.

According to Japan Today, when the police spot drones in no-fly zones, the “the squad will search for the operators and order them to ground the drones.”

Should those operators fail to comply, police will scramble large drones (as big as 6 to 10 feet long) with cameras and nets to take down the mechanical intruders.

While plenty of fancy anti-drone countermeasures exist, nets are proving to be one of the more popular options. South Korean researchers successfully experimented with net-carrying drones attacking other drones.

Japan’s foray into swarming, net-bearing drones comes from an amendment to Japan’s Civil Aeronautics Law, passed in September, that went into effect today.

The law sets out fines and other penalties for improper drone use, like limiting drones to flights below 500 feet (compared to 400 feet in the U.S. under current Federal Aviation Administration law). Tokyo’s law also bans drones larger than 200 grams (about half a pound) outright from large dense residential areas, which includes all of Tokyo. This is the same size of drones exempt from the FAA’s proposed drone registry, though the FAA has so far not prohibited flight from cities broadly, instead banning them from areas near airports or specific no fly zones.

The Japan Times notes that hobbyist requests for flight approval “must be sent by postal mail to the ministry 10 working days beforehand, which in practice means up to 15 calendar days in advance.” The fines for violating these rules appear to be at least 500,000 yen, or roughly $4,000.

There have been calls for drone regulation in Japan for a while, but they really starting gaining traction this sprign after drone carrying suspected radioactive material landed on the roof of the Prime Minister’s office (it turned out to be a harmless stunt by an activist).

The police drones will respond to threats like this and others, first by issuing a verbal warning to the pilot if they can be found, and then if need be using their own drones to net the offending drone. Which is to say, it probably won’t be long before you’ll turn on the TV to watch live televised drone chases unfolding. Car chases are so 20th century.