Skynet Anti-Drone Rifle Can Jam Signals In The Air 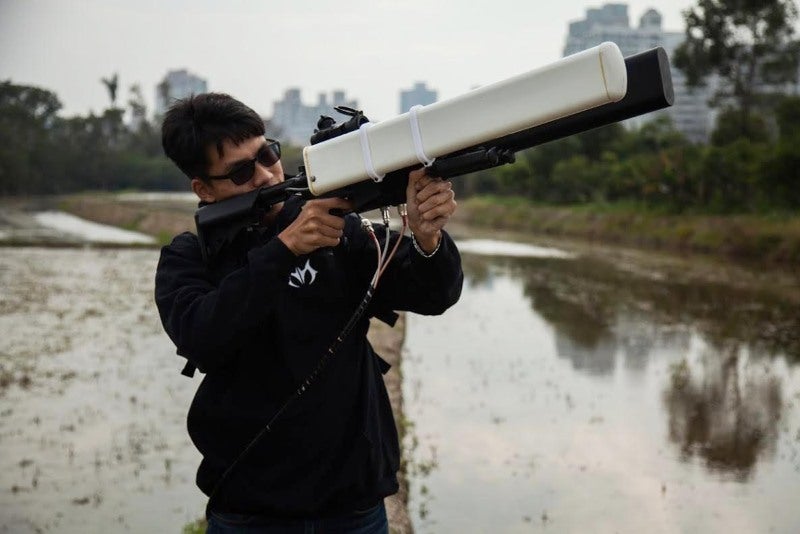 Terminator, the 1984 film about a time-traveling robot assassin, looms large in the popular understanding of drones. At the core of the Terminator universe is SkyNet, an artificial intelligence that nukes humanity to save itself. I only mention Terminator as a preface to this, weird and true thing about the year 2016: there is a new company making anti-drone weapons, and it calls itself Skynet.

Canonically, the name makes no sense: Skynet was a system of robots hunting people, so a stand-alone anti-drone rifle to protect people from robots should really be named something more like John Connor.

As for the product itself: the Skynet rifle weighs roughly 12.5 pounds, not counting its backpack power supply. It charges in 90 minutes, can hold a charge in standby position for 15 hours, according to HiGH + MiGHTY, the Taiwanese company that makes the rifle, and can work for two hours straight while on. The device has a range of 1.25 miles (without interference).

When it comes to stopping the drone, a video demonstration of the Skynet system shows it blocking GPS signals to a quadcopter, and then shutting the camera off. At the end of the video, the targeted drone lands, though it’s unclear if this is because Skynet forced the drone to land or the drone pilot decided to do so. Attempts to contact the makers of Skynet were not returned by the time of publication.

There are other, somewhat similar anti-drone tools in existence. West Point cadets used a demonstration cyber-rifle as part of training this summer, and the Battelle Drone Defender rifle was spotted in Iraq earlier this year. Jamming drone signals, and doing so with rifles, isn’t the only way to disable quadcopters. Other tools range from net bazookas to trained police eagles.

Watch a video about the Skynet anti-drone below, which features an alien for some reason: