We'll believe it when we don't see it 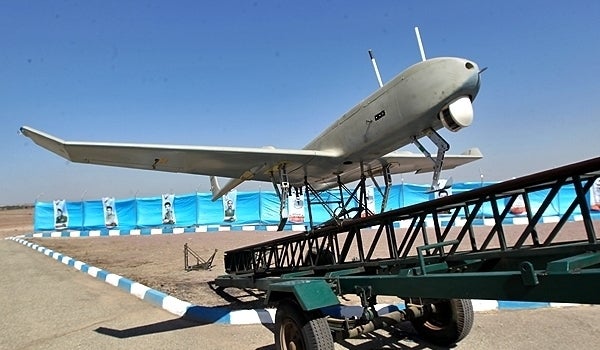 Iran has a new home-grown drone to show off. Announced today, the drone has a “jamming capability,” according to Iranian state-owned news network Fars. The Sifar drone is just one of many new models on display at an exhibition of the Iranian Ground Forces. Besides the Sifar jamming drone, Fars claims that a “drone equipped with destructive laser weapons” was revealed at the exhibition.

Iran builds its own drones, and some have seen action fighting in Syria and Iraq. Yet the capabilities promised don’t always match the vehicles themselves on display, and more than once Iran’s been found photoshopping weapons so they look more impressive than they are. These presentations range from likely hoaxes, such as its stealth drone that is probably a toy model filmed at a distance, to exaggerations, like Iran’s custom-made kamikaze drone, which was an existing drone model filled with explosives and nothing else.

Siraf, according to Fars, was “built by students at the college of the Ground Force’s artillery training center in Isfahan,” so even if functional, it’s more a college project than a factory production.

“The picture of the Sifar shown at the Beit ul-Muqaddas 28 exercises back in May shows a regular Mohajer-2 drone,” says Rawnsley, “which was first developed in the 1990s, with a new payload, most likely some kind of jamming equipment. There doesn’t appear to be much ‘new’ about the drone.”

“Iran’s Artesh Ground Forces have done something similar before with a Mohajer-2, stuffing the drone with explosives in 2013, slapping a different name on it and calling it a new drone.”

That skepticism is worth keeping in mind for the next time Iran shows off a new drone. Putting different, existing electronics on a drone doesn’t necessarily a new weapon make.