West Point Cadets Are Shooting Down Drones With Cyber Rifles

Training for the future of war 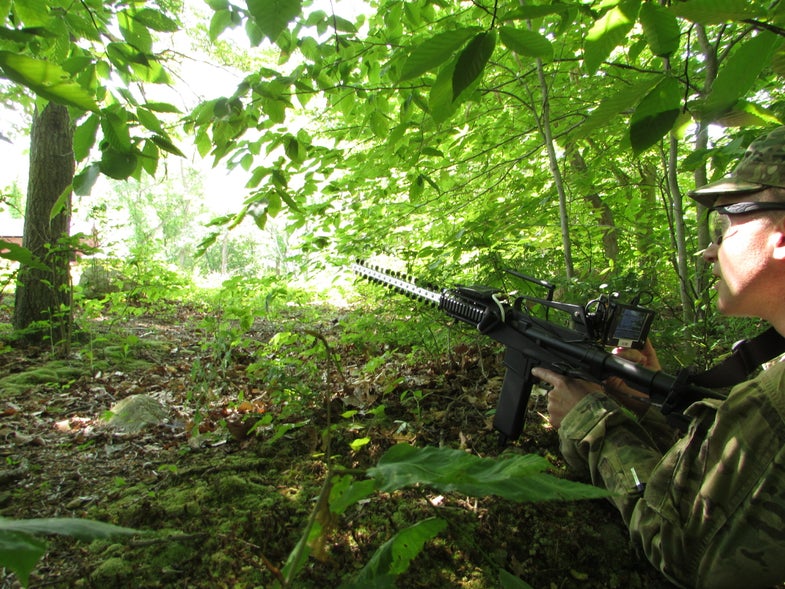 Tall grass hid the advancing cadets from my perch in building 7. The tall grass hid nothing from the drone the defenders flew over their position, a Parrot AR 2.0, a common model used by civilian fliers. A minute later, after the drone pilot filmed the crawling cadets, instructors called in mock artillery fire. The cadets’ position was compromised, and while the rest of their platoon advanced to take the buildings, these 10 cadets instead spent an hour in the sun contemplating what they could have done about the drone.

The answer was standing right behind them. As the smoke grenades denoting artillery landed nearby, a supporting electronic warfare officer aimed a rifle-shaped antenna at the drone. The drone crashed to the ground instantly, its camera going fuzzy and then only showing the pilot a close-up of asphalt.

The rest of the battle was a success for all involved: the defending squad of cadets successfully retreated, that attacking platoon took and held the buildings, and the Army Cyber Institute gave the Army’s next generation of leaders a taste of the complexity that cheap commercial technology can bring to modern war.

I, a non-combatant, am here at this rural training site near the United States Military Academy in West Point, New York, on this June Thursday at the invitation of the Army Cyber Institute.

Part of the Army’s larger cyber complex, the Institute is a sort of internal think-tank at West Point, trying to figure out what the cyber component of warfare looks like in practice. “Cyber” is a broad term, and it mostly brings to mind people sitting at desks slinging code across the internet.

“Cyber electromagnetic activities,” says the definition in an Army field manual on the same, “are activities leveraged to seize, retain, and exploit an advantage over adversaries and enemies in both cyberspace and the electromagnetic spectrum, while simultaneously denying and degrading adversary and enemy use of the same and protecting the mission command system.”

What does that actually mean in practice? Sometimes, it means the people at desks on computers. But this day, it meant an antenna on an airsoft M-4 rifle stock, hooked up to a Raspberry Pi computer, spitting code over Wi-Fi at an unlocked toy quadcopter (the Parrot AR drone).

This specific cyber rifle only works with a specific type of drone, so don’t expect soldiers to go into battle with code rifles the next time they deploy. That’s almost beside the point. Most of the exercise traced a familiar point to soldiers for decades: spend a few hours marching to a village, and then dislodge the defenders holed-up there. 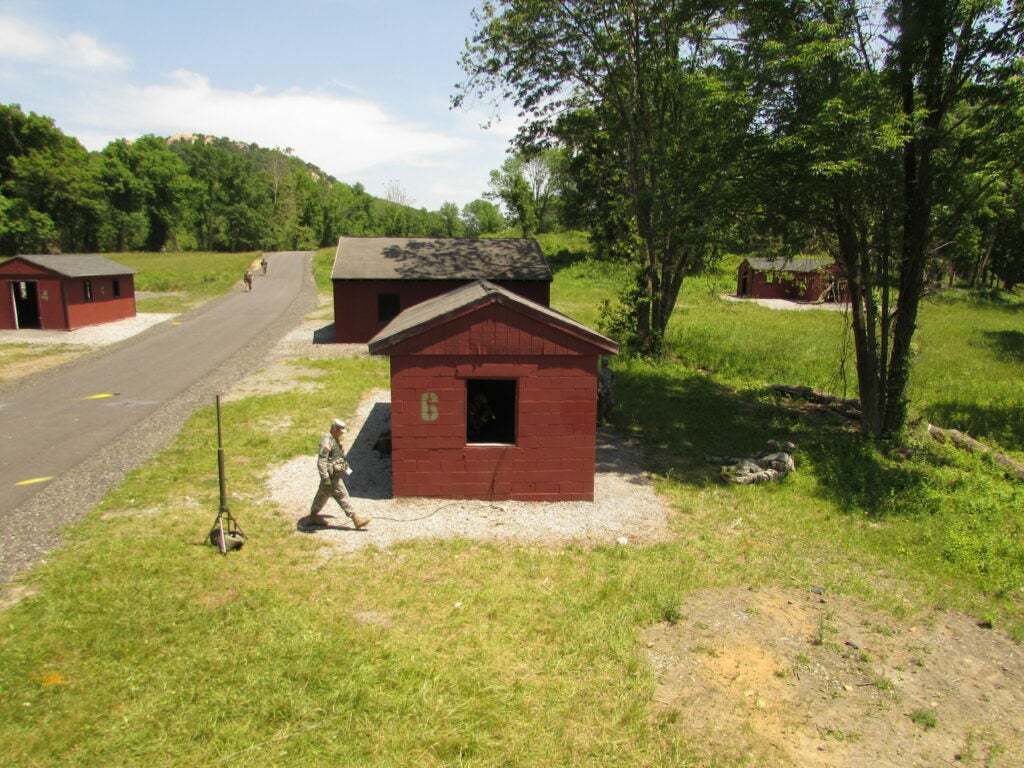 These are about half the buildings of this mock village site. It is an extremely generous definition of “urban”.

This scenario is termed a MOUT, or “Military Operations Urban Terrain.” “Urban” is defined pretty loosely — the site had eight small buildings, one of them two-stories, and a couple of trucks. It was urban in the sense that it wasn’t an empty field.

The terrain was typical for this part of New York State: forest around the clearing, a couple gentle hills, and mountains all around the site. I lost cell phone signal unless I stood in one place in the two-story building. Captain Millman, an officer escorting West Point’s own media team to the event, joked that the army did a good job “implementing the terrain” for cyber operations. That is to say, it was a naturally denied environment. Most communications didn’t work, so the cadets and officers relied on the radios that did.

Going through this course were 24 cadet platoons, of 40 people each, meaning a total of 1,000 seniors and juniors were running this course. The course ran from May 19th through June 8th. I watched the exercise from the woods with the 13th platoon to go through. Matching West Point’s enrollment, it was roughly 80 percent male, though this was only clear afterwards when the cadets removed their helmets for debriefing.

My handler for the assault was Erick Waage, a Captain with the Army Cyber Institute. He held the cyber rifle, and earlier that morning the attack team picked him up as an “enabler.” Essentially, an enabler is any person with a unique skill not with the unit that is attached for the mission — it could be a local interpreter, a special guide, or in this case, someone with a unique weapon to offer. Here is the information the Army Cyber Institute gave the cadets on the drone (described, as they often are in military circles, as a micro-Unmanned Aerial System):

C2 is “command and control,” so this just means that the person in charge of the defense can use the drone to scout.

Added to the danger: this drone wasn’t just a scout, but in the scenario they had to treat it as a deadly weapon too, one packing an explosive punch. While bullets are of some use against drones in the real world, for this scenario they were deemed ineffective, so the attacking cadets had to use different means to shoot them down.

That meant the cyber rifle. Here’s how the cadet’s orders described it:

The CEMA enabler task is to neutralize ENY drones to allow PLTs freedom of movement. O/a 0600, CEMA TM conducts L/U with 1 st PLT and integrates into platoon’s scheme of maneuver in support of counter-UAS.

CEMA is “cyber-electromagnetic activity,” ENY is enemy, and PLT is platoon. At 6 a.m. in the morning, the cyber rifle team linked up with the platoon, and they marched for several hours to get into position. I, escorted politely to the mock battlefield, arrived a little before 10 a.m., and was sent into the woods to watch the attack.

The cadets choose to assign Captain Waage to the weapons squad, whose medium machine guns would provide covering fire as the squad advanced. A few minutes after my arrival we heard the drone, and Captain Waage knocked it out of the sky. Then I saw the machine gunners open packs ear plugs. All guns for the training used lasers and sensors in the cadet’s uniforms to signal hits, but they were still loaded with blanks, so the exercise got really loud, really quickly. 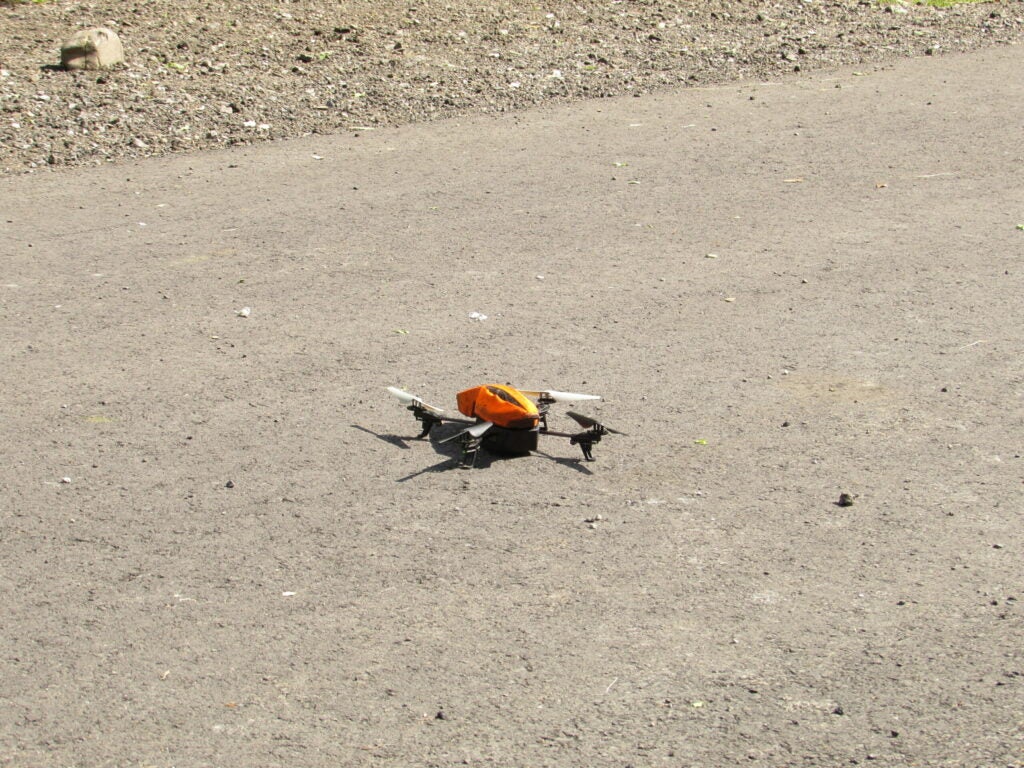 Parrot AR 2.0 On The Ground

The disable drone, sitting on the road.

After the initial flurry of action, it became clear that the defenders were in two buildings up the road, so I gingerly left my perch in the woods and watched the action from inside. I was here to see the drone, and with it out of the way, the attack proceeded as planned.

The Army Cyber Institute is one small part of the Army’s larger cyber apparatus. In Fort Meade, Maryland, there’s the 780th Military Intelligence Bridge, which focuses on defending networks at a much higher level. There’s also the Cyber Center of Excellence at Fort Gordon in Georgia, which focuses on growing institutional knowledge of cyber within the Army. This, again, is a broad range, from protecting information on secure networks from outside intrusion to just making sure that when troops in the field use their radios, they only say what’s necessary.

Captain Cliff McClung is an Electronics Warfare officer who used the cyber rifle for the platoon that came through in the afternoon. He explained that before approaching the buildings, he and the cadets plotted out areas of the map. and assigned each a single word code name. That way, when communicating with radios in the exercise, they could be brief. Radio signals are easier to find the longer they’re broadcast, and radio silence remains as important a form of protection in 2016 as it was in the past. 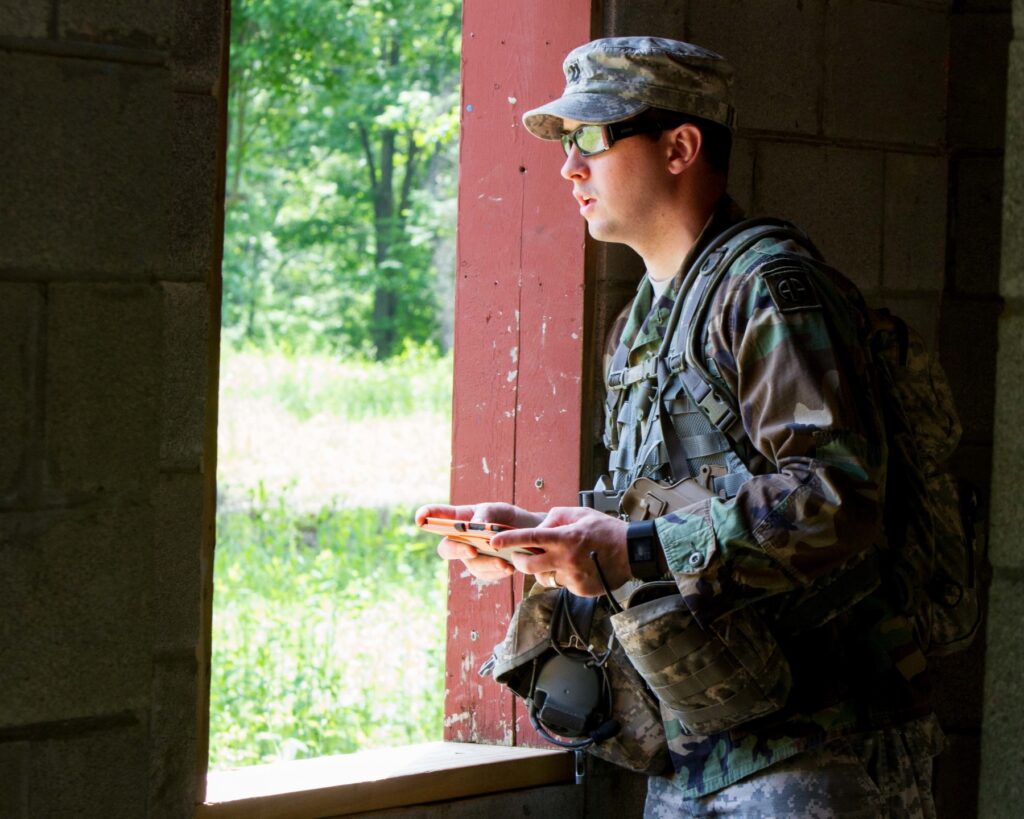 With an android tablet and a toy quadcopter, aerial scouting has never been cheaper,

After the first platoon went through, there was some time to process the lesson. Cadet Austin Neal, in charge of the exercise, had never fired the cyber rifle before, so Captain Matthew Hutchison, today’s drone pilot, got the drone in the air and Captain Waage showed Neal how to shoot it down.

In a moment the quadcopter buzzed to life, then hung low in the air above the cinder block-and-plywood buildings. Neal, positioned on a small hill about thirty feet away, pointed the cyber rifle’s antenna at the drone, and it fell to the ground with a clattering of plastic.

“All I had to do was press the red button and pull the trigger,” Neal reported afterwards.

The cyber rifle is an example of what an elegant solution to cheap drones might look like. Commercial drones with cameras have prices in the low hundred of dollars (the Parrot AR 2.0 costs south of $200 these days), with more elaborate ones available at a couple thousand. 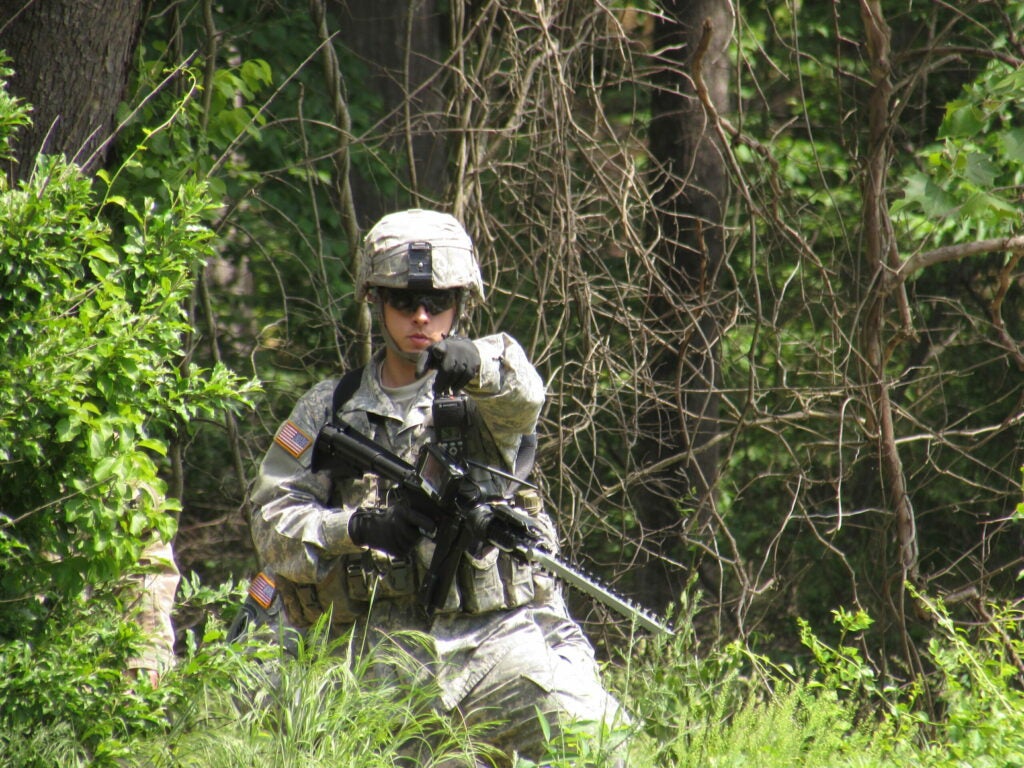 This was Neal’s first time firing the cyber rifle.

Both Ukrainian forces and the Russian-backed separatists in Donetsk are using commercial drones, but the Russian-backed side is better equipped, and are developing drone doctrine: one quadcopter flies over a trench, where Ukrainian troops shoot at it, and then the second drone watches the muzzle blasts, training artillery on the target. It’s brutal and it’s relatively cheap.

If a future anti-drone weapon is as simple and subtle as the cyber rifle, soldiers will be more than capable of using it with just a moment’s training.

This lesson was clearest on the second run of the day. That platoon, the 14th to approach this course, put their weapon squad at the far end of the clearing, trusting the range of their guns and the concealment of the tall grass. Then they crawled forward into position, where the quadcopters spotted them overhead.

Captain Cliff McClung, the cyber-rifleman attached to the squad, decided to make this a teachable moment. He called the officer piloting the drones for the defenders, and in a moment the quadcopter was overhead, filming soldiers advancing on arms and knees. The instructors looked at the footage, called in the artillery, and the weapons team was out, their advance undone by the drone. McClung then knocked the drone out of the sky, and the lesson proceeded as planned.

As their peers advanced building by building amidst drifts of yellow smoke, ten future U.S. Army officers spent the next twenty minutes in the sun, contemplating the future of war. 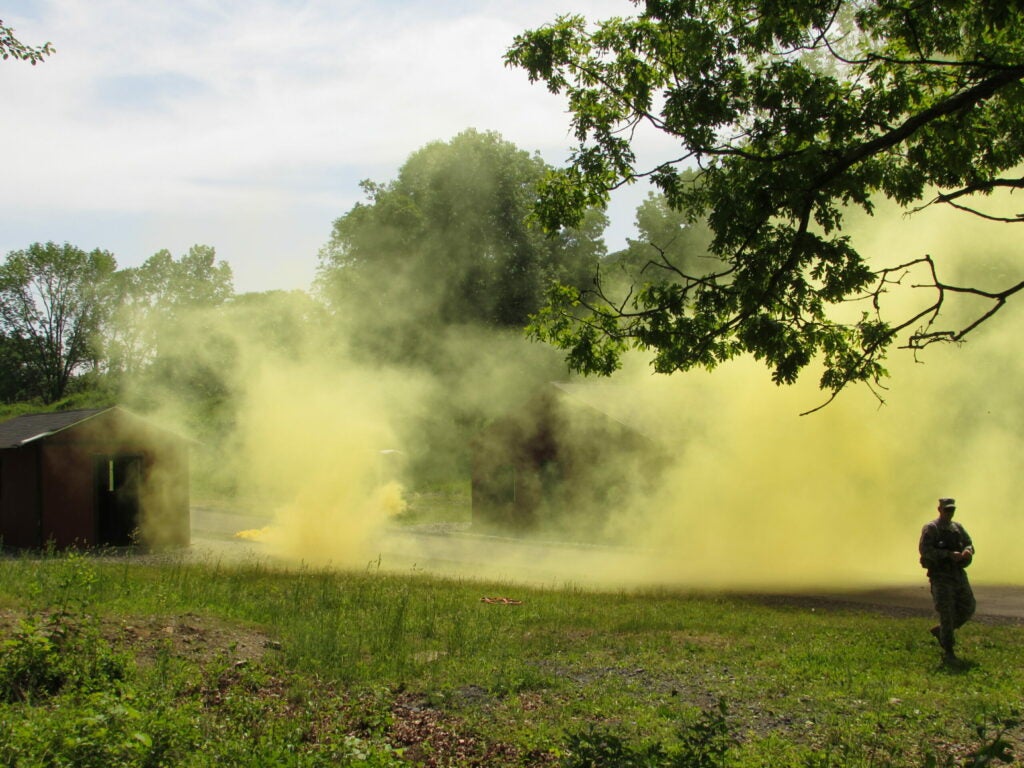 Smoke On The Training Ground

Yellow smoke provided both cover and obscurity for the advancing troops. And then it drifted away, into nothing.
Kelsey D. Atherton