This German Laser Is Made To Shoot Down Drones 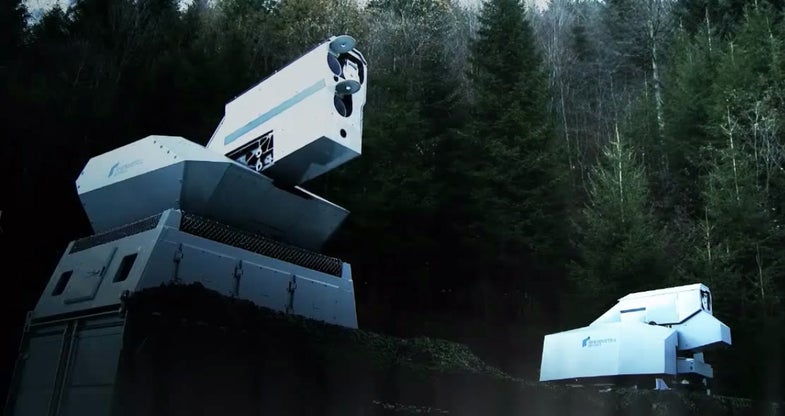 This is a real laser gun that's marketed to real militaries in our real reality. Screenshot by author, from YouTube
SHARE

Drones are smaller, slower, cheaper, and lower-flying targets than most airplanes, which makes them a weird threat to modern militaries. Even when just scouting, and especially if outfitted with explosives, the unmanned aerial vehicles are dangerous enough to warrant their destruction, but cheap enough that it doesn’t make sense to use a missile.

Enter the laser cannons, like this one on display at the Eurosatory 2016 Land and Airland Defence and Security tradeshow. It looks suitably like the future:

Made by Germany’s Rheinmetall, the Oerlikon Skyshield High Energy Laser is part of a larger system of sensors and weapons.

Paired with radar, anti-air missiles, and 35mm guns, the whole system tracks incoming projectiles and shoots them down, assigning each weapon to the target for which it’s best-suited: missiles target planes, guns counter attack helicopters, and the lasers focus on small drones.

Or, in this example, the lasers target even smaller threats, like incoming mortar shells.

Lasers are expensive to develop, but their promise is that they’re very cheap to use, compared to what they shoot down. The lasers “feature a very favorable cost-to-kill ratio”, according to the voiceover in a Rheinmetall promotional video.

The full system on display at the tradeshow aims to be a defensive kit in a box. Give it power and ammo, put it in the right place, and it should protect the troops inside from the dangers around them. With lasers.

Watch a long video on it below: