This Device Turns Any Gun Into An Anti-Drone Ray

The DroneDefender is a 10-lb add-on for electronic warfare 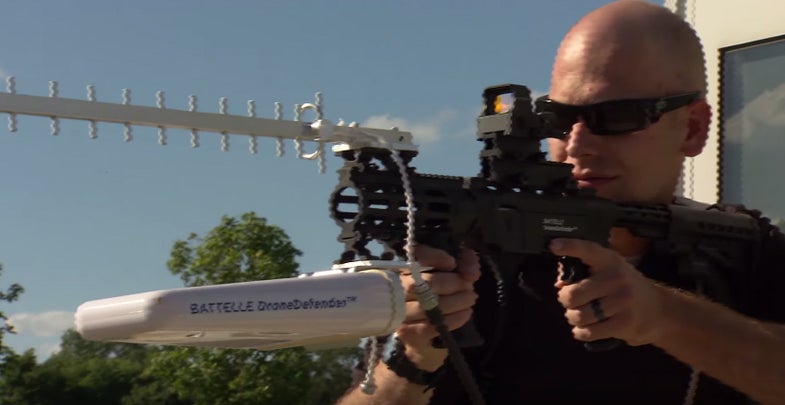 The Battelle DroneDefender is a rifle made for electronic warfare, as first reported by Motherboard. The gun looks like a hodgepodge of science fiction props strapped together. Despite its appearance, it’s not made to fire any projectile. Instead, the DroneDefender works by jamming the communications of commercial drones, causing them to lose control and, ideally, land.

The DroneDefender s weighs less than 10 pounds and can be mounted on any existing weapon with a picatinny rail—a fairly standard mount found on military rifles.

The attachment jams GPS signals, as well as radio signals normally reserved for industrial, scientific, and medical radio communications (the ISM band). It’s primary targets are small commercial drones flown in places the federal government doesn’t want them to be: the radio bands it uses to disrupt drone signals are restricted, so this isn’t a product for everyday consumers annoyed by their neighbors quadcopter. Not to mention the fact that currently, the cost hasn’t been publicized.

The weapon is billed as a “non-kinetic solution,” which is fancy jargon for saying that it will stop drones without firing a bullet, or using an explosion, or another projectile.

This is best in cases where cops want to disable a drone without risking injury to bystanders or property. In war zones, bullets might be a more valid and easier alternative.

To work safely, the DroneDefender also puts a lot of faith in drone programming, relying on a confused quadcopter’s ability to adopt lost-link protocols (a backup program in its onboard computer) that send it to the ground, back home, or keep it hovering in a holding formation. A drone designed to behave differently when it loses its signal could post a challenge.

Battelle’s is hardly the first anti-drone weapon, though it looks to be one of the lightest and smallest. Other systems, like the British AUDS and the Selex Falcon Sheild combine sensors into an automated jamming array, tracking drones over a vulnerable area and shutting them down. Battelle’s DroneDefender instead turns the guns guards may already have into small anti-drone rays, ready to protect against flying robots.

It may not be the most accessible armament for those looking to take down drones, but it’s not too big a stretch to imagine DroneDefender—or something like it—becoming more popular among military/police/security personnel in the near future. Watch a presentation on the DroneDefender below: