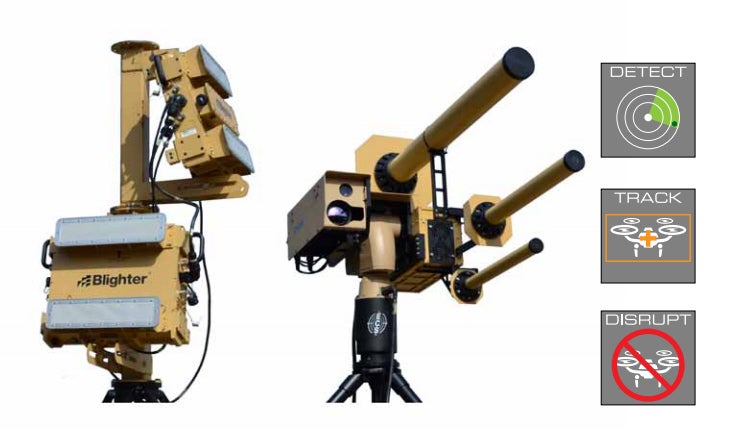 The United Kingdom is ready for robot-on-robot warfare. A new anti-drone weapon system called the “Anti UAV Defense System,” which was developed by Blighter Surveillance Systems, Chess Dynamics, and Enterprise Control Systems Ltd, is a combination radar, camera, and jamming system all built into device.

Here’s how it works. First, the radar identifies and tracks the flying drone. Then, once the drone is within camera range, the electro-optical camera follows the drone, keeping it in focus at all times. Finally, the jamming device attacks it: Three antennas send out a radio frequency signal to the targeted drone, trying to cut it off from its original controller. In seconds, the jammed drone stops in the air and then crashes to the ground. Like this:

The radar can find drones up to five miles away, even ones as small as 15 square inches. This is good, because the system seems to mostly work on small, commercial drones, and not the high-flying Predator-types used by militaries. A brochure about the system says it “may be used in remote or urban areas to prevent UAVs being used for terrorist attacks, espionage, or other malicious activities against sites with critical infrastructure.”

If the system works, maybe the White House should invest in one. Another drone crashed nearby earlier today. Watch a video of the system below: