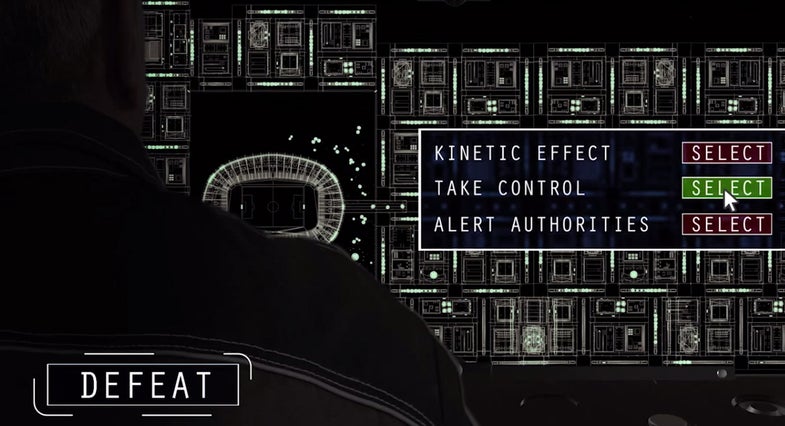 The rise of drones will, inevitably, lead to their Icarus-like fall. Earlier this week, Selex ES, part of Italy’s large Finmeccanica defense giant, unveiled an anti-drone weapon at the Defence and Security Equipment International in London. Dubbed “Falcon Shield,” the system neither mimics nor uses actual birds to attack unmanned flying machines. Instead, “Falcon Shield” is a collection of sensors and software that are supposed to work together to find, track, and then either disable or take over hostile drones.

That’s a lot of jargon. In plain talk, the first part means that cameras and radar look for and track drones. “Electronic attack” translates roughly to “jamming or hacking,” and “optional kinetic effectors” is jargon for “bullets,” or something like bullets.

Selex ES lists five technologies which are part of the Falcon Shield system, though it’s probably safe to assume there are more components they aren’t advertising. These systems are the NERIO-LR long-range camera, the NERIO-ULR ultra-long-range camera, the camera-on-a-32-foot-stick Observer 100 with radar too, Vantage camera and sensor-coordinating software, and the Horizon HD infrared camera. (Many of these cameras have thermal imaging components as well.) The Falcon Shield system as displayed is, it appears, a collection of cameras, all focused on identifying and tracking small drones.

The material is vague on how exactly it stops small drones, but a video of the system shows the hypothetical threat: a quadcopter dropping a bomb in a stadium.

The video then rewinds to show the same attack, foiled by Falcon Shield after mysterious beams take over the drone:

It’s certainly possible to confuse drones with wrong coordinates, or even shut them down through Wi-Fi. It’s unclear what method Falcon Shield uses for takeover, but the set of sensors at least show a product very dedicated to tracking drones as they fly. Watch the full video below: