A blood moon, lunar eclipse, and fiery meteor shower will all grace the sky this week

Tuesday's blood moon eclipse will be best viewed in the western United States and is the last lunar eclipse until 2025. 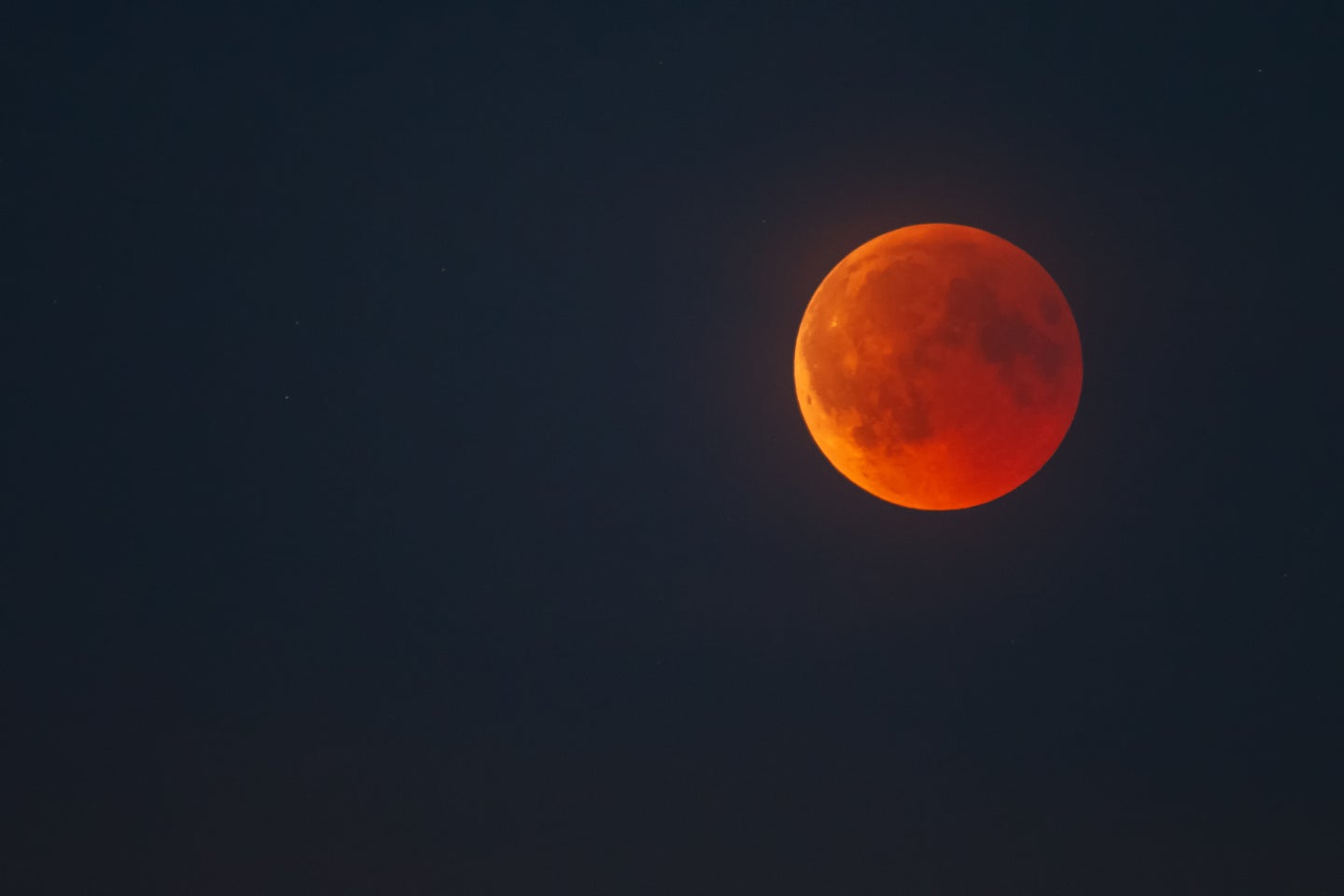 A blood moon in the night sky. Deposit Photos
SHARE

Heads up, space cadets—there are some with some very exciting sky gazing opportunities to take advantage of this week. Luckily, you should be able to watch them without a telescope.

First up is Tuesday’s full blood moon lunar eclipse. Stargazers in North America, Central America, most of South America, Australia, New Zealand, and Asia will see the moon turn a reddish hue very early tomorrow morning. In the United States, stargazers in the western part of the country will get the best views.

[Related: We’ve been predicting eclipses for over 2000 years. Here’s how.]

NASA predicts that at 3:02 a.m. EST, the moon will encounter Earth’s outer shadow in what’s called a penumbral eclipse. The partial eclipse phase will start at 4:09 a.m. EST. This is where the darker shadow (or umbra) is cast on a portion of the moon while the rest is still shining. Then, from 5:17 a.m to 6:42 a.m. EST, the eclipse will reach totality. This is when the moon will really live up to its blood moon name and take on a red tint.

If you prefer to sleep, especially after this weekend’s clock change, rather than watch the skies, you can still watch the event with NASA’s Scientific Visualization Studio’s simulation of the eclipse and a livestream.

Full moons throughout the year have names tied back to Native American and European traditions. This November’s full moon is named a Beaver Moon, which comes from the time of year before winter when beavers take shelter, according to the Old Farmer’s Almanac. The other names for the full November moon also refer to this time of preparing for the cold and dark winter months ahead. It’s also called the Digging or Scratching Moon, in reference to animals foraging for nuts and greens and while bears dig their dens.

Next up, we have the southern and northern Taurids meteor shower. The southern Taurids peaked over the weekend on November 4 and 5, but the northern is estimated to peak this Friday and Saturday. The Taurids occur annually in the months of October and November.

[Related: How to photograph a meteor shower.]

Shooting stars, or the product of super small debris and sand grains entering the Earth’s atmosphere and burning up after a meteor passes by the Earth, are common. The Taurids are special in part because of just how bright the meteors are. It produces pebble-sized debris instead of the minuscule dust-sized debris created in other meteor showers, which create a bright streak of light when it hits the Earth’s atmosphere, according to NASA Meteor Watch. For the Taurids, the debris was likely left behind by comet Encke, whose last close approach to Earth was in 2015.

There is a chance that some very fast meteors known for their fireballs will be visible during this years shower because it is a potential Taurid Swarm Year. Meteor expert David Asher from Armagh Observatory and Planetarium discovered that Earth encounter swarms of larger particles shed by the comet Encke in certain years. 2022 is predicted to be one of those particularly stellar years. Encke also has the shortest known orbital period for a comet, at only 3.3 years for one complete trip around the sun.

The same rules apply to watch this meteor shower and lunar eclipse apply to pretty much all space-watching fun: go to a dark spot away from the lights of a city or town and let the eyes adjust to the darkness for about a half an hour. Viewing this meteor shower doesn’t require a telescope or binoculars, just eyes and a curious mind.