The mysterious gas is more likely a sign of volcanism than life, scientists argue. 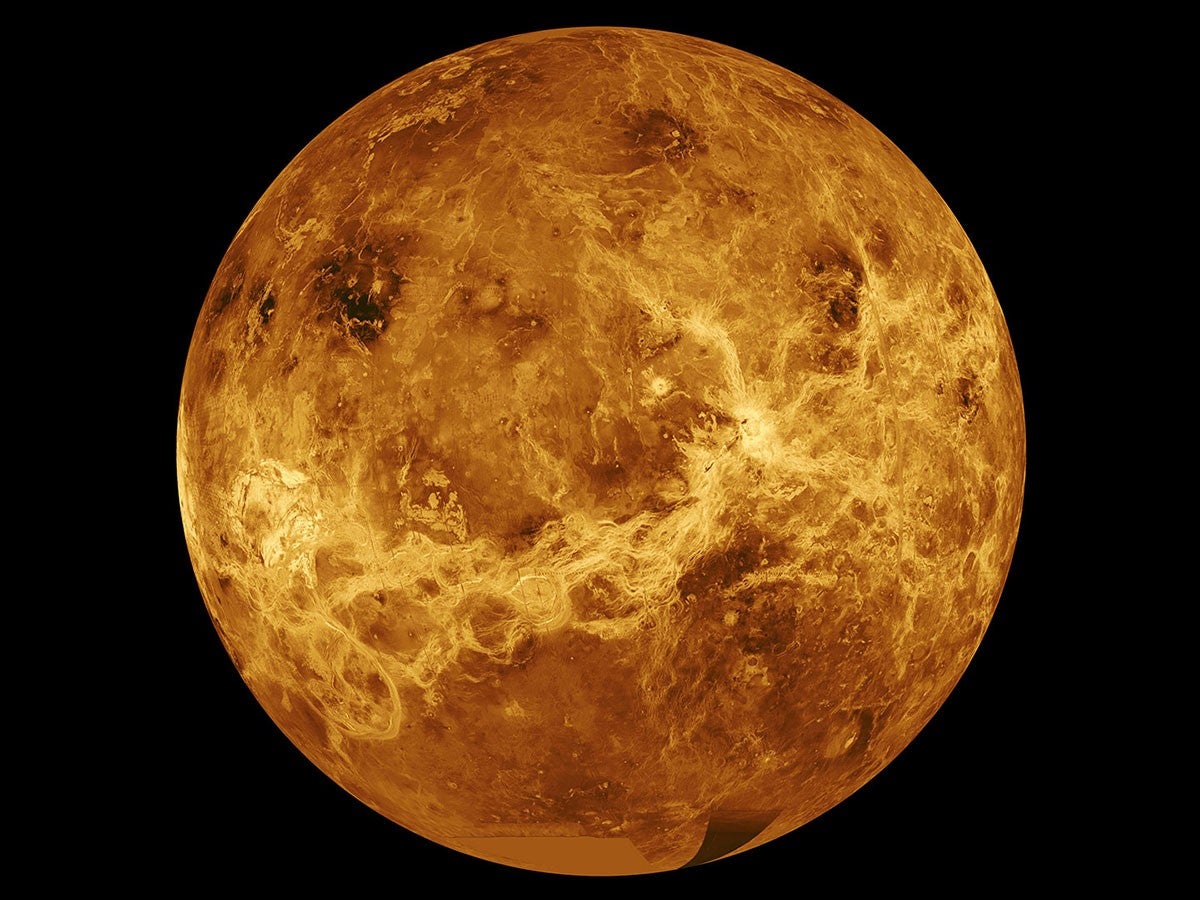 Venus hides a wealth of information that could help us better understand Earth and exoplanets.
SHARE

Last September, scientists reported trace amounts of phosphine gas in the clouds of Venus, raising the tantalizing possibility that alien microbes might be responsible. Since then, researchers have debated whether the gas might stem from biological, geological, or atmospheric processes. They’ve even debated whether it actually existed in the first place.

A study published this week in Proceedings of the National Academy of Sciences makes the case that, if phosphine is hanging around Venus’s atmosphere, explosive volcanism could be responsible. Researchers calculated that eruptions on the scale of Krakatau’s 1883 outburst on Earth—a cataclysmic eruption in the Indonesian islands—would be necessary to launch volcanic dust high into the Venusian atmosphere, where it would react with sulfuric acid to form phosphine.

“Venus is a body that’s not really that much smaller than the Earth…but its geology is so different,” says Jonathan Lunine, chair of the department of astronomy at Cornell University and a coauthor of the findings. “The idea that volcanism is occurring today on Venus…is a reasonable inference, and if it turns out to be correct it’s very exciting because it means that our nearest neighbor really is geologically active today.”

Venus is often referred to as Earth’s twin because of its proximity and similar size and density, and it may have even had oceans on its surface in the past. Nowadays, the surface is hot enough to melt lead, the air pressure is a crushing 90 times that on Earth, and the skies are filled with thick clouds of sulfuric acid. All in all, not prime real estate.

Still, when telescopes in Hawaii and Chile detected the chemical signature of phosphine in Venus’s atmosphere, researchers began to speculate about whether it could be produced by hardy microorganisms.

However, other groups have challenged the findings, and the original team has revised their estimates of the amount of phosphine in Venus’s atmosphere from around 20 parts per billion to between 1 and 5 parts per billion.

[Related: These scientists spent decades pushing NASA to go back to Venus. Now they’re on a hot streak.]

So the question of whether phosphine actually exists in Venus’s clouds isn’t settled. And even if phosphine is present, scientists still haven’t agreed on its origin. There’s still a lot we don’t know about how microbes produce phosphine here on Earth, much less under the brutal conditions of Venus, Lunine and his coauthor Ngoc Truong, a doctoral candidate in geology at Cornell University, point out in their volcanism paper. Another recent study indicates that there’s not enough water to sustain life in the Venusian clouds in any case.

So where else could the phosphine have come from? One alternative explanation for the mysterious phosphine is volcanic eruptions. Under this scenario, magma carrying small amounts of chemicals called phosphides travels from deep within Venus’s mantle to the surface. After being ejected into the sky as volcanic dust, the phosphides react with the surrounding sulfuric acid and are transformed into phosphine.

Some researchers have argued that an improbably high level of volcanism would be necessary to make this happen. Lunine and Truong weren’t so sure. They consulted several previously published experiments which showed that phosphides can be converted to phosphine around 1,000 times more efficiently by sulfuric acid than water. This suggests that, in Venus’s strongly acidic atmosphere, a fair amount of phosphine could be produced from the small amounts of phosphides available from volcanic dust.

The pair then calculated how quickly the highly reactive phosphine gas would decay in the atmosphere (if it decayed too quickly, it would be less likely that a telescope would pick it up), as well as the amounts of phosphide in the mantle and of dust blasted into the atmosphere by volcanic eruptions that would be necessary to supply enough phosphine to explain the telescope observations. The researchers found that “major explosive volcanism” on the scale of Krakatau’s eruption could carry material as high as 70 kilometers (about 43.5 miles). They don’t know how common or likely these episodes are, however.

“We also point out that there are some pieces of circumstantial evidence for active volcanism on Venus today,” Lunine says.

These include observations of geologically recent lava flows on the planet’s surface and periodic spikes of sulfur dioxide, a compound released by volcanoes.

“From our point of view, the most plausible mechanism for the phosphine being there is active volcanism on Venus,” Lunine says. “All of this seems to work for a reasonable amount of volcanism.”

The crucial next steps will be for scientists to nail down whether phosphine really is present and if Venus remains volcanically active, he says. NASA and the European Space Agency both have missions to Venus scheduled for the next few years, which hopefully will soon offer some answers.

“Venus offers an exciting opportunity to understand why Earth and Venus are so different,” Truong says. “With or without life, Venus is exciting in itself.”