If life exists on Titan, it’s even weirder than we thought

Any microbes may have to forego membranes, or live underground. 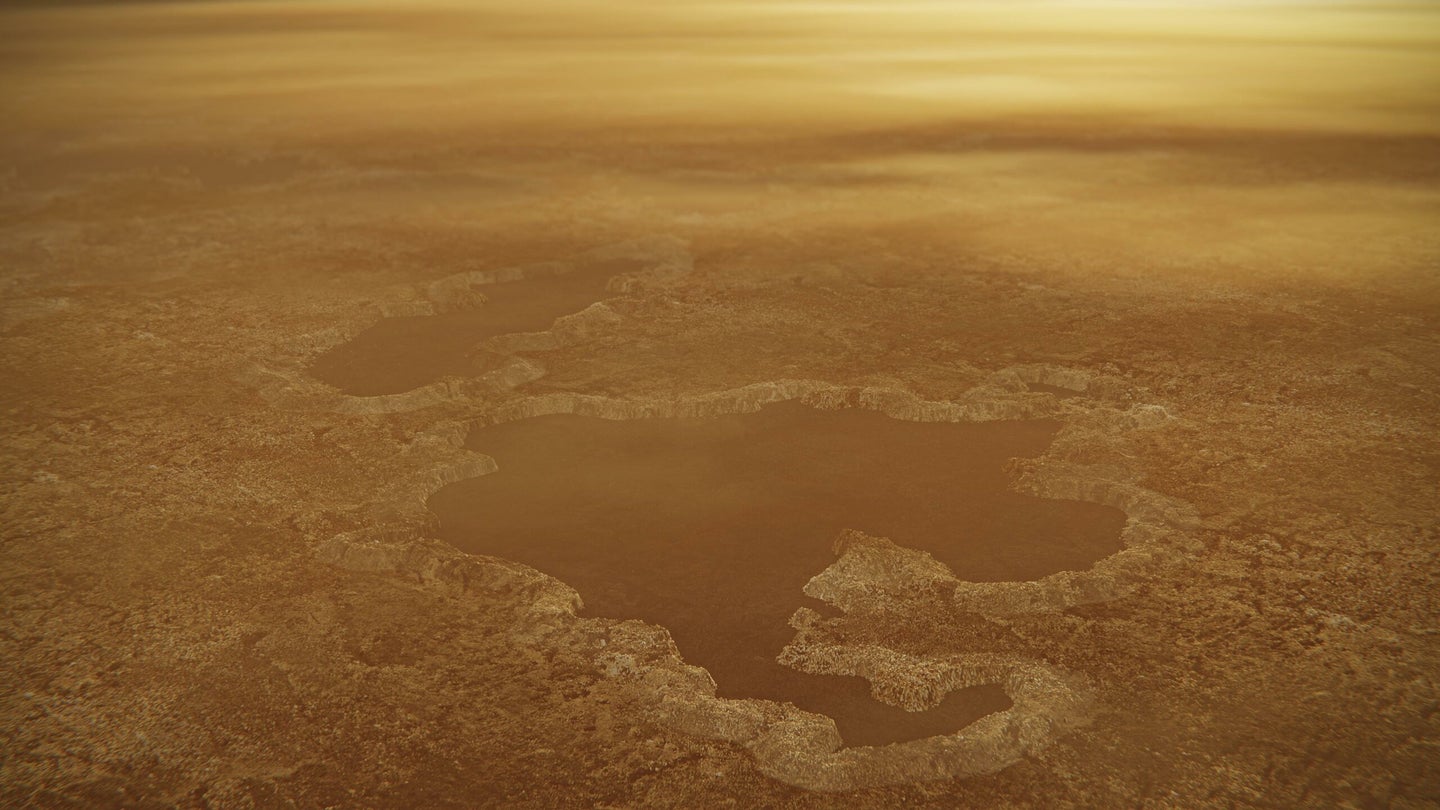 Anything that can call Titan’s lakes home would have to be one tough critter. NASA/JPL-Caltech
SHARE

Saturn’s moon Titan would not be a comfy place for Earthlike microbes, even as alien worlds go. It lacks a global ocean like the ones found on Europa and Enceladus, and it doesn’t enjoy the (relatively) balmy climate of Mars. But it does look strikingly Earthlike in one respect—lakes with crinkled shorelines speckle its surface.

Those lakes are filled with methane and ethane rather than water, and any inhabitants would have to deal with temperatures reaching 300 degrees below zero Fahrenheit, but where liquid sloshes, life might find a way. Specifically, life could assemble itself from a particular chemical building block uniquely suited to Titan’s harsh environment, some researchers have suggested.

“People took this proposal very seriously. There’s not that many concrete suggestions in astrobiology,” says Martin Rahm, a chemist at the Chalmers University of Technology in Sweden.

Now, however, a recent simulation by Rahm and a colleague, described in Science Advances, dashes the hopes that such a recipe would be capable of cooking up life, or at least anything like the microbes we know and love. It turns out that life on Titan—in the unlikely event that it exists—would have to be pretty darn weird.

Drop any Earth organism into one of Titan’s lakes and it is not going to be a happy camper. Even our hardiest single-cell beings are held together by membranes made from fatty molecules called lipids. Lipids hang together and form a barrier because certain parts attract water molecules while other parts repel them. These interactions with water shepherd the molecules into flat sheets that can roll up into containers that keep a cell’s inner bits from floating away. But Titan’s lakes have no water to interact with, and the frigid temperatures would freeze any Earth life solid.

What’s an aspiring proto-cell to do? Skip the lipids and try another molecule known as acrylonitrile. A team of Cornell researchers led by Paulette Clancy, a physical chemist now at Johns Hopkins University, calculated in 2015 that this molecule’s unique chemical properties would let one molecule attract another (as opposed to interacting strongly with the surrounding liquid), forming a membrane that, under Titan-like conditions, remains unified and squishy enough to allow movement. Two years later, the ALMA observatory found direct evidence of acrylonitrile molecules on Titan, and in sufficient quantities to theoretically support millions of single-celled lifeforms.

Rahm found the Cornell team’s proposition inspiring, especially its razor-sharp prediction: The cells of Titan life would be based on this one molecule, forming a particular shape, under specified conditions. Astrobiology (the study of theoretical alien life) rarely reaches conclusions specific enough to test with a computer simulation. “It’s not like you can just compute out an alien,” he says. But this time was different.

The Cornell group had proven that acrylonitrile-based cells could survive on Titan without falling apart, but could the membranes come together in the first place? Lipid membranes form spontaneously in water, and their counterparts on Titan would have to do the same in freezing methane. “This is far from obvious,” Rahm says. It involves “quantum mechanical calculations and it isn’t something where you can just look at the molecules.”

Rahm and his colleague, Hilda Sandström, created a computer program to simulate how floating acrylonitrile molecules would act while bumping into molecules of methane at 298 degrees below zero Fahrenheit. When they ran it, they found that the molecules organized into a rigid crystal kind of like ice or table salt, and not the flat and flexible sheet needed to wrap up a cell. Any life on Titan, they concluded, couldn’t have the soft shell all Earth cells do.

Jonathan Lunine, a member of the Cornell team that first suggested the exotic membranes, praised the work as “excellent,” but said that there’s still some wiggle room for the original idea. Rahm and Sandström’s calculation assumed a purely methane environment, for instance, but Titan’s lakes contain ethane and other features that just might coax the molecules into a soft sheet. Lunine also suggests that if life took root another way, it could evolve tools to actively manufacture membranes much as our cells produce proteins.

Rahm points out other ways life could get by too, although he stresses that such ideas are extremely speculative and unlikely. First of all, Titan likely harbors a subsurface ocean of liquid water where Earth-style lipid-based cells would do just fine.

As for the surface, he speculates that living molecules might forego membranes altogether, relying on Titan’s largely frozen environment to hold them together. Such molecules could live out their lives stuck to a rock, waiting for nutrients to float their way naturally. There are “seasonal changes, wind, receding shorelines,” Rahm says. “There’s movement on the surface.”

The discussion remains purely theoretical for now. But when NASA sends the Dragonfly drone to explore Titan in the 2030s, perhaps chemists and earth will have prepared a wish list of exactly what kinds of molecules to look for.